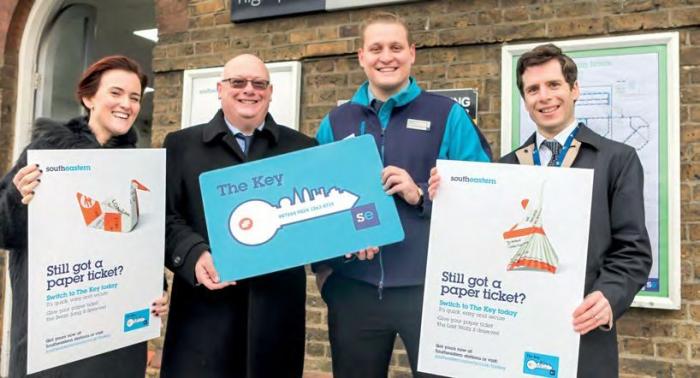 Key upgrade: Southeastern is expanding its ITSO smartcard offering, with The Key now available at ticket offices as well as online. Singles, returns, one-day travelcards and railcard discounts are now available on the card, as well as seasons. Promoting the card at Sittingbourne before Christmas were (left to right) Diane Burke, Commercial Director for Southeastern; Steve Lamey, Smart Ticketing Programme Director at the Department for Transport; Zach Stebbeds, Platform/Sales Rest Day Relief at Southeastern; and John Backway, Head of Retail for Southeastern.

THE CURRENT Southeastern franchise, operated by Govia, is to be extended for a further 12 weeks.

A new franchise had been planned to start on 1 April, but this has now been deferred to 23 June following the extension. The Department for Transport had planned to announce the winner of the new franchise during autumn 2018 but confirmed in November that the announcement would take place in the New Year.