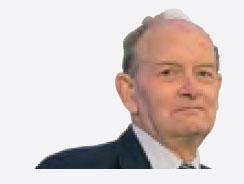 Two aspects of the responses to the announcement by the Rail Accident Investigation Branch (RAIB) that it was investigating the incident at Norwich Road Automatic Half Barrier (AHB) level crossing on 24 November 2019 (p96, last month) merit analysis. Train operator Greater Anglia remains adamant that the cause was nothing to do with ‘the design or performance’ of its new train. Despite it clearly being a train-track interaction issue, Network Rail has taken the view that the passenger does not care who was responsible, and got on with providing a solution.

However, there were also reports of other cases of Stadler Class 755 bi-mode multiple-units failing to actuate track circuits as the late leaf-fall came to an end. This resulted in the units being withdrawn from service for a few hours.

According to informed sources, Anglia Route’s performance during the 2019 leaf-fall season had been very good, with fewer delays and safety issues due to loss of detection, with the majority that did occur being Class 755s. But note that since the Class 755s started running in December 2018, there had been no detection issues until leaf-fall.

All should become clear when the RAIB reports. However the claim that it is a signalling, not a train problem, when other trains had been using Norwich Road crossing safely for 20 years, does not stand up to Occam’s razor.

HOW DO TRACK CIRCUITS WORK?

In its most basis form the track is divided in sections. At the end of each section each rail is electrically separated from the next by an Insulated Rail Joint.

An electric power source is connected across the pair of rails at one end of each section. A circuit is created by connecting the rails at the other end of the section through a relay. The current in the rails holds this relay closed. The relay is connected to the signalling system and indicates that the section is not occupied.

If a train enters the section its axles short-circuit, or ‘shunt’ the rails. The current no longer flows through the relay, which opens, indicating to the interlocking that the section is occupied.

Coded track circuits avoid the need for insulated rail joints. A detector at one end of the virtual section is tuned to the frequency or waveform produced by the transmitter at the other, so that each section is self-contained. As before, if the rails are shunted by a wheelset, the signal is lost and the relay opens. 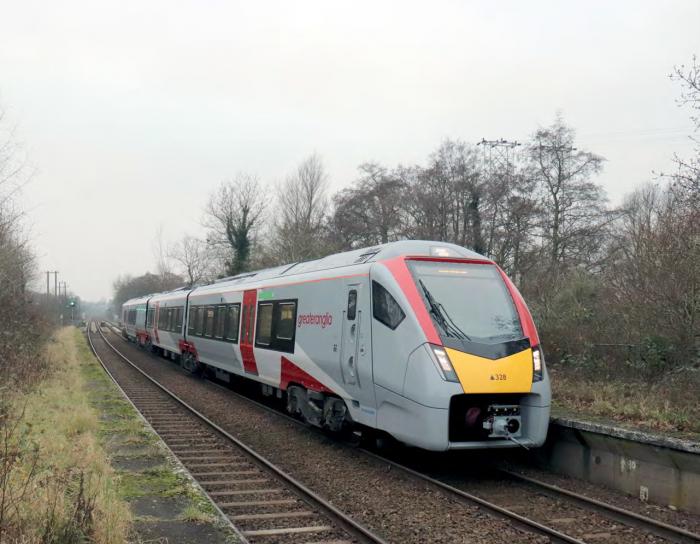 At about 19.53 hours on Sunday 24 November 2019, a four-coach Class 755 passenger train, operating the 19.45 Norwich to Sheringham service, was approaching Norwich Road automatic half barrier level crossing, to the north-east of Norwich. The crossing barriers were in the lowered position until the train, travelling at about 45mph (72km/h), was about 200 metres from the crossing. The barriers then lifted, the level crossing warning lights went out and cars began to cross the railway. The train driver applied the train’s emergency brake and sounded its warning horn, but the train was unable to stop before reaching the crossing. No road vehicles were struck but a car passed in front of the train around a quarter of a second before the train went over the crossing. RAIB summary

Rust on the rail, or a build-up of compressed organic material on wheel tread and rail-head during leaf fall, increase the electrical resistance between rail and wheelset. This may prevent the wheelsets shunting the low voltage and current used in track circuits. As a result, the presence of the train may not be detected.

Trains with high axle loads are generally able to cut through contaminants. Tread brakes also clean and roughen the tread, improving conductivity at the contact patch where wheel meets rail.

However the advent of lightweight trains, such as Class 150 Sprinters and Pacers, saw an increase in detection failures. To overcome this problem, British Rail developed the Track Circuit Assister (TCA).

This is a loop aerial fitted between a pair of wheelsets on a vehicle. It is supplied with a high frequency alternating current. Rather like the two coils in a transformer, this induces a current at the same frequency in the parallel ‘loop’ formed by the two wheelsets and the rail.

This raises the effective track circuit voltage across the pair of rails. The relatively high voltage at the wheel-rail interface breaks down the rust film, allowing track circuit current to flow, de-energising the track relay.

A TCA does not provide any assistance to other wheelsets and the assistance it provides is interrupted at IRJs or when passing over deposits of compressed leaf film. Since it was developed, policy has been to fit TCAs to all new trains classed as diesel or diesel-electric multiple-units.

WHAT DETECTION WAS PROVIDED AT NORWICH ROAD AHB?

An AHB not only needs to know that a train is approaching, but also how long it has to start the closure sequence. Clearly, in the interests of road traffic flow, the closure time should be kept to the minimum.

British Rail policy was to have redundant train detection, using a ‘treadle’ at the ‘strike-in’ point plus a track circuited section. The treadle, actuated by the train wheels, triggers the closure sequence, starting with the flashing lights and ending with the barriers lowering.

Location of the treadle is based on the maximum speed of trains approaching the crossing. This is what is known as the strike-in point and is the distance the train will travel during the closure sequence plus a margin. The track circuit tells the AHB logic that the train has left the section and the barriers can be raised.

After privatisation, one of Railtrack’s priorities was to obtain low-cost signalling, suitable for replacing manually controlled mechanical boxes and crossings. In November 1997, two pilot schemes were let, one of which was the Norwich – Cromer route.

Harmon of the USA would provide the single processor interlocking and other hardware. The contract was let through its recently acquired subsidiary Vaughan Systems of Ware, now renamed Vaughan Harmon Systems Ltd. Three existing automatic crossings would be modernised and three others automated.

AHB on Anglia: this example is at Burston, Norfolk. No 90005 Vice-Admiral Lord Nelson leads the 10.00 Norwich – Liverpool Street over the crossing on 8 September 2016; in a couple of miles it will be braking for the Diss stop.
Antony Guppy

With automatic level crossings, the disadvantage of a fixed strike-in point is that the warning time given to the user may be longer than necessary for slow trains. Predictors can be fitted to level crossings which measure the speed of the train and initiate the closing sequence to provide a constant delay.

Harmon’s predictor system was fitted to the six AHBs between Norwich and Cromer and entered service in 2000. The Harmon HXP-3 uses audio frequency track circuits to detect an approaching train. The rate of change of the inductance of the rails is used to determine the train’s speed. This is used to calculate the ‘strike in’ point to provide a constant warning time. According to the Office of Rail and Road, there has not been any previous accident history on the crossing in the 20 years since the predictor system entered service.

RAIB has identified two key issues for its investigation. These are the design, implementation and operation of the predictor system, including any effects of rail-head contamination due to fallen leaves, plus the design of ‘relevant elements of the Class 755 train and the process for accepting it for use on this route’.

Pending the results of the inquiry my assumption is that detection was lost due to contamination of the wheel-rail interface. The predictor logic assumed that the train had left the section and opened the gates to road traffic.

WHAT WAS THE RESPONSE TO THE INCIDENT?

Train detection on the Cromer line is by axle counters, so train location was unaffected by loss of detection. At the six AHBs, Network Rail immediately put the barriers under local control, introduced double block working and imposed a 20mph Emergency Speed Restriction.

This accounted for much of the service disruption. The extended running times meant that there was insufficient time to run to Sheringham and pick up the return timetable. Trains were therefore turned back at Cromer.

It was also decided to fit treadles as a backup to the predictor track circuit at the six AHBs. This is a reversion to British Rail practice.

Norwich Road, Great Plumstead and Rackheath Road crossings had been equipped just over a week after the issue emerged. The closed period for the gates has also been extended to 98 seconds. The other three AHB crossings were subsequently fitted.

HOW WERE OPERATIONS AFFECTED?

Normal operation could be maintained between Brundall Junction and Yarmouth/Lowestoft because the route was still operating absolute block manual signalling, pending commissioning of new signalling later this year. However, user-worked crossings on the route employ track circuits to locate trains. The mitigation against possible loss of detection was to contact drivers by radio to confirm location.

On the East Suffolk line, train detection is a combination of long axle-counter sections with track circuits at stations. Mitigation was to introduce a form of double block working, so that the location of trains was always known.

These mitigation measures were initiated on Friday 6 December, but during the weekend there were no services on:

It was then a case of a line-by-line risk evaluation as services were reintroduced.

Ipswich – Cambridge could be run with legacy DMUs. On the Felixstowe branch a form of double blocking allowed a two-hourly service to restart.

Trials were run to determine whether Class 755 operation could be resumed on Ely – Cambridge and Ipswich – Cambridge services.

Finally, as part of the mitigation, extra Rail Head Treatment Trains were operated. Greater Anglia staff also cleaned the wheel treads of the Class 755 units at turn round stations with cleaning fluid and brushes.

In parallel with the RAIB investigation, Network Rail and Greater Anglia had set up a Technical Task Force which was reporting daily on the detection issue.

HOW SOON DID THE RAILWAY GET BACK TO NORMAL?

‘Intelligent infrastructure’ allows Network Rail to monitor and interrogate its assets. This powerful tool is an unsung success, with a write-up overdue. In the case of Anglia Route it includes track circuits. This meant that a Class 755 could be run over a route, with individual track circuits being checked for correct operation.

As a result, by the start of the new year, the infrastructure was fully available with no restrictions on Class 755 operation. The only exceptions were the 20mph ESRs at the three AHBs pending fitment of treadles. The speed restrictions alone did not affect the operation of Norwich – Sheringham services.