ALL CHANGE AT REEDHAM JUNCTION 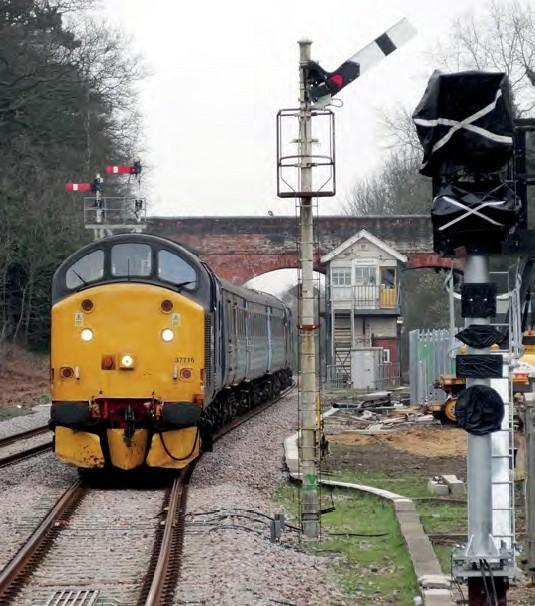 REEDHAM JUNCTION signal box, on the line between Norwich and Lowestoft, was decommissioned on 22 March, ahead of a nine-day engineering possession. During the blockade Network Rail and its contractors carried out extensive upgrade works at Reedham, Cantley and Brundall in connection with the Norwich, Yarmouth and Lowestoft (NYL) resignalling scheme. In an earlier possession in October 2018, the single line connection from Reedham Junction to Great Yarmouth via Berney Arms was blockaded until further notice.

The large Great Eastern Railway Type 7 all-wooden signal box at Reedham, with a 60-lever McKenzie & Holland frame, was built in 1904, when the line between Reedham and Somerleyton was doubled. The box was sited some distance from the divergence of the lines to Great Yarmouth (via Berney Arms) and Lowestoft, yet it commanded a grandstand view of Reedham station. It remained in virtually original condition to the end.

Work at Reedham has included the installation of new track and the removal of crossovers and the spur leading to once extensive sidings behind the box and former station cattle dock. The latest possession saw the elimination of the remaining semaphore signals controlled by Reedham Junction, along with removal of selected semaphore signals at Cantley, so that it effectively becomes a gate box. Until the resignalling scheme is commissioned at a later date, the absolute block section through Reedham will run between Brundall and Reedham Swing Bridge signal boxes.

At Brundall, reconfiguration of the junction has taken place, with the removal of crossovers, installation of replacement points, electric point motors and their power supplies, plus track renewal. On the station, platforms have been resurfaced and a 50-metre section of platform restored. Reedham Junction signal box has been donated by Network Rail to the North Norfolk Railway and is destined for Holt, where it will become a museum. Richard Horner