Rather like buses, you wait months for Network Rail and Resonate to agree a long-term contract for the Great Western main line’s Luminate integrated Traffic Management and then two contracts are announced simultaneously. As reported in ‘Infrastructure News’ last month, the Derby-based company has been awarded 10-year contracts, together worth £50 million, covering licensing of the Luminate software, maintenance and support, plus provision for future enhancements, at both Didcot and Liverpool Street control centres.

Given the time taken to reach mutually agreeable terms for a new type of contract for the existing GW installation, a second Luminate contract covering the control area of the Liverpool Street Integrated Electronic Control Centre (IECC) came as a surprise. It must also have surprised those bidding for the East Coast TM Partner (TMP), since Lot 1 covers ‘a framework for TMS anywhere within the geographic scope of Network Rail’s Eastern Region’.

Indeed, according to informed sources, there was concern that a TMP bidder might protest the award of a £50 million TM contract to the firm which came last in the pre-qualification evaluation. However, the ‘voluntary ex-ante’ Notice in the Official Journal of the European Union announcing the intention to award the contract had been carefully worded by a crack team of specialist lawyers. In the event, the 10-day standstill period passed without dispute and the roll-out of Integrated TM has begun.

Ex-ante Notices aim to justify letting contracts without competition. Thus, the Notice explained that competition was absent on the Liverpool Street contract ‘for technical reasons due to unique characteristics/technical capabilities of Luminate to integrate with existing IECC Scalable system in Anglia’. It added: ‘No reasonable alternative or substitute exists. Luminate is uniquely suited to meeting the contract objectives’. 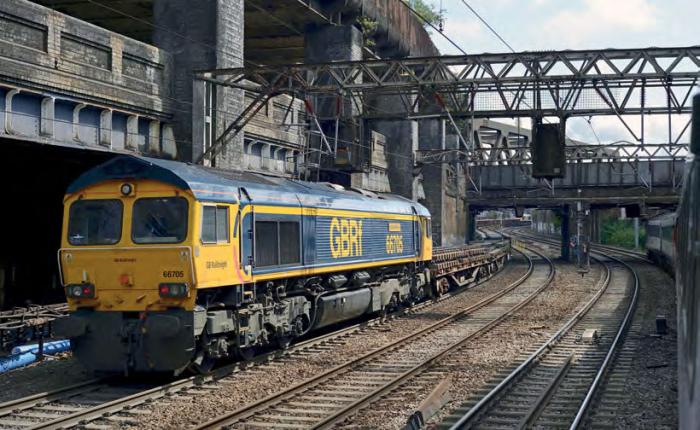 Congested throat: No 66705 Golden Jubilee at Bishopsgate with an engineer’s train during track relaying on the Liverpool Street approaches on 21 July 2019.
Antony Guppy

It also emphasised that the aim was to ‘secure enhanced functionality in the IECC Scalable system through the installation of supplementary software’. Nothing new to see here – please move on.

A long screed followed, hammering home multiple reasons why Luminate was the only option. A major argument was that software and systems from a different manufacturer would risk integration and compatibility issues. It would also divide responsibility for maintenance and support between two companies, ‘making it difficult to support and maintain the IECC Scalable platform as a whole, including interface responsibility and a single point of accountability’. The result would be ‘disproportionate technical difficulties in operation and maintenance of the IECC Scalable platform’.

All worthy reasons, but the key factor in Luminate’s success is a decades-old system that has been largely overlooked in the TM procurement process. Traffic Management software can do an increasing range of clever things. However, to implement its outputs it needs to interface with the real railway.

When British Rail Research was developing the IECC concept, a key feature was Automatic Route Setting (ARS). The aim was to reduce the workload on the signallers at their workstations by running the timetable – setting routes and regulating trains – automatically. As I was told on a visit to Didcot Signalling Centre, under normal conditions, the Great Western main line is an ‘ARS railway’.

However, there has been a tendency to understate the capability of ARS amid the excitement of procuring TM. ARS is much more than an electronic version of the London Underground’s Dell Programme Machines with the timetable encoded as holes punched in a roll of plastic sheet.

While running the timetable, ARS takes account of late-running trains and prioritises route setting at conflict points to minimise aggregate train delay. In complex areas it can also re-route trains where it is permitted to do so. There are also facilities to invoke contingency plans, rescheduling services in the event of infrastructure unavailability.

With IECC Scalable, Resonate’s Enhanced ARS (E-ARS, pronounced ears) runs the day’s timetable which is downloaded the previous night by Network Rail. As an aside, both Luminate and Hitachi’s Tranista TM at Three Bridges are proving invaluable at de-conflicting these downloads, which regularly contain plans which are undeliverable.

When Luminate is used to re-plan a service, the changes are downloaded to the Scalable timetable planner (TTP), which E-ARS then implements. As I was told during a Luminate demonstration at Didcot, ‘the TM can throw the new plan at the ARS which can correct any minor issues’.

So E-ARS is quite smart. And if the TM shuts down, E-ARS will continue running the most recent timetable.

This is why I have added ARS development dates to Table 1 (p24). In summary, while TM has been the focus of attention over the past decade, to be effective it is crucially dependent on ARS. For Resonate and Siemens the application of some Keizen – continuous improvement – to E-ARS and ARS should be the order of the day.