TUNNELLING ON the 3.2km Battersea extension of the Northern Line from Kennington in south London started in March and is due to be completed by December 2017. This will be followed by fit-out, with the stations finished by the end of 2019 and opening by the end of 2020.

The two new stations of Nine Elms and Battersea Power Station are being constructed on the deep box principle, with the two (separate) running lines being bored by earth pressure balance TBMs Amy and Helen. The tunnel bores are of 3.5-metre diameter to permit a metre-wide pathway, with a minimum curvature radius of 300m.

The Battersea branch is fed by step plate junctions off the Charing Cross terminal loop beyond the Kennington platforms; trains from the branch will only be able to run to and from the West End. A capacity of 30 trains per hour will be achievable. The level interchange arrangements between City and West End branches at Kennington are being enhanced, with more cross-passages between the two pairs of platforms. 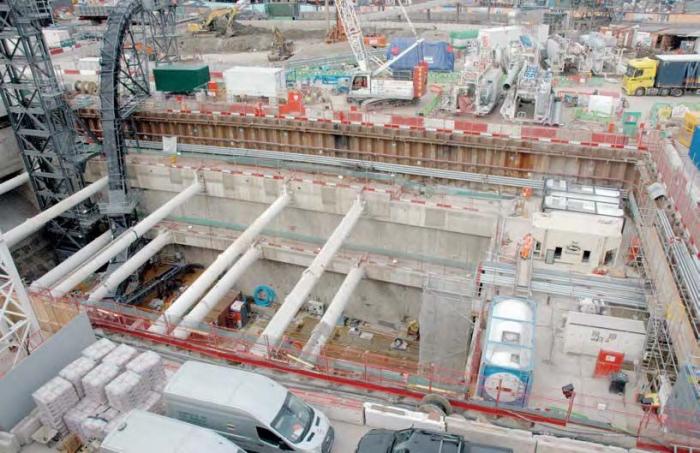 Future service levels will depend upon other Northern Line developments, in particular the proposed complete separation of the Charing Cross and City branches into two separate Underground lines.

The principal contractor is Ferrovial Agroman Laing O’Rourke. The new route will support the creation of 25,000 new jobs and more than 20,000 new homes in the Vauxhall, Nine Elms and Battersea area.

Based on a visit to the Battersea LU work site with the Permanent Way Institution on 17 March 2017.