THE BEXLEYHEATH line will close for nine days from 15 to 23 February 2020 to allow Network Rail to carry out a project to protect the railway from landslips.

Four landslips have occurred in the past decade, following which Network Rail is to invest £6.6 million in removing 2,500 tonnes of mud and trees so engineers can reduce the steepness of the cutting slopes.

Retaining walls made from steel beams will then be built along a 650-metre stretch on both sides of the cutting to stop any future landslips reaching the tracks. NR says the solution will keep the railway safe for 120 years.

The blockade has been timed to coincide with February half-term week. Working with Southeastern, NR says capacity will be increased on alternative routes with additional or longer trains. Kidbrooke, Eltham, Falconwood, Welling, Bexleyheath and Barnehurst stations will be closed during the nine-day period.

To make the most of the closure NR says it will bring forward other infrastructure improvements in the area and essential maintenance at the affected stations.

Other major projects planned in the region include a £90 million investment in new signalling in the Hither Green area, due to be brought into use over the Easter bank holiday weekend next year, while track and junction renewal work will see three sets of switches and crossings at Ashford International station replaced during a five-day Christmas closure from 25 to 29 December, along with various weekend closures before and after the main works.

Track in place for Metro extension

TRACK LAYING on the West Midlands Metro extension from Grand Central to Centenary Square has been completed by the Midland Metro Alliance.

Construction began in June 2017, and services are due to start over the extension in December. The Westside extension is being delivered in two phases and is due to continue beyond Centenary Square to Hagley Road in Edgbaston, with this section opening in 2021.

The Midland Metro Alliance is planning, designing and delivering extensions to the network, which also include those to Wolverhampton Interchange, the Wednesbury to Brierley Hill route and the Eastside extension towards Solihull.

WORK HAS begun to make way for installation of three new escalators at Bank station, part of a major upgrade due for completion in 2022.

The three escalators will connect the Docklands Light Railway concourse to the Northern Line, with the DLR concourse to be reduced in size and a one-way system put in place while work takes place.

The overall station upgrade project has now passed the halfway mark and reached a further milestone in September when the roof on the new station entrance on Cannon Street was completed.

The new entrance will provide direct access to the Northern Line as well as connecting with a new moving walkway to the Central Line.

Other elements of the programme include construction of a new southbound tunnel for the Northern Line, on which Transport for London says good progress is being made with the platform already under construction. This will replace the current southbound tunnel, which will be converted into a passenger concourse. The project includes provision of two new lifts and 12 new escalators, step-free access to the Northern Line and improved step-free access to the DLR platforms. Contractor Dragados is working with TfL on the scheme, which targets a 40% capacity increase at the station by 2022.

PARAPETS WERE removed from Bletchley flyover over August bank holiday weekend as part of work to refurbish the structure for the East West Rail project.

Freyssinet has a contract from the East West Rail Alliance for the work on the 37-span structure, which carries the future EWR route over the West Coast main line. The flyover was opened in 1960, and while it is in good condition for its age the bearings are life-expired and require replacement. The removal of parapets comprised one of a number of early works packages to investigate the condition of the structure and prepare for the main works. The parapets required removal as some of them had deteriorated badly. Freyssinet worked with the East West Rail Alliance team in three eight-hour shifts, with a double-shift at nights to suit the all-lines blocked possession. The company says it exceeded expectations by removing 194 elements compared with the programmed 99. 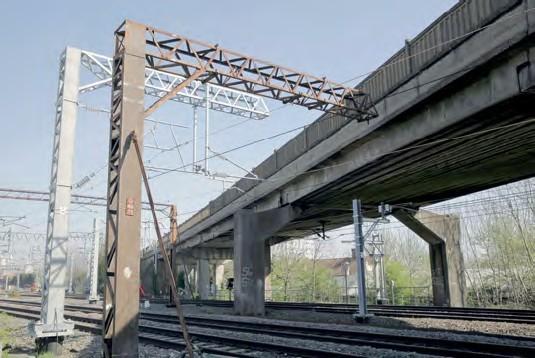 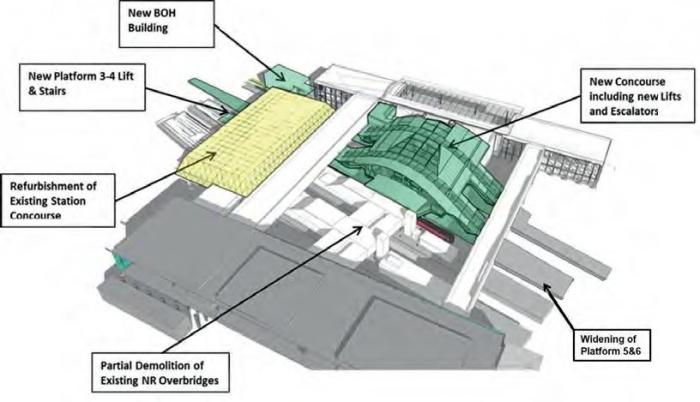 New exit with ramp for platform 7

New modern back of house building

Walking routes in the station will change while work is underway

PLATFORMS WILL be closed and a 30mph speed restriction put in place while Network Rail works to deliver the £150 million improvement of Gatwick Airport station.

The scheme is funded by the Department for Transport, the airport and Coast to Capital Local Enterprise Partnership, with work to start in May 2020 and be completed by 2023. The platform works, due for completion by 2022, comprise the widening of platforms 5 and 6, provision of a new exit with a ramp on platform 7, and installation of five new lifts, eight new escalators and new staircases.

During these works platforms will be closed and a speed restriction put in place, with Govia Thameslink Railway developing dedicated timetables to support the project.

The building works, running through to 2023, will include construction of a new glass-roofed concourse to provide an exit point from the railway, with the existing concourse becoming an ‘entry only’ space. A modern back of house accommodation building will also be built.