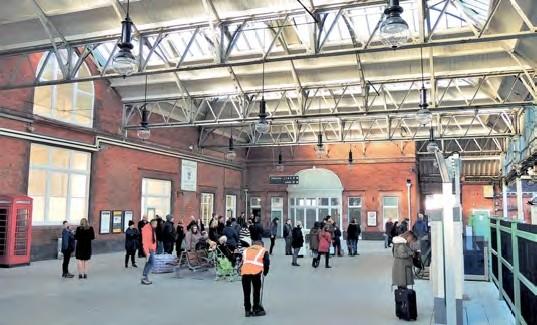 Refurbished: the station concourse flooring at Bognor Regis has been replaced, the relevant parts redecorated, and the station lighting improved, producing a bright and airy ambiance through the mostly glass roof. John Vaughan

GOVIA THAMESLINK Railway held an event on 19 January to mark the completion of the £2.5 million refurbishment of Bognor Regis station.

Over the decades the 1902-constructed Grade II listed station building had been gradually deteriorating, and a scheme was drawn up for a substantial makeover funded by Network Rail under the National Stations Improvement Programme (£1.85 million), the Coastal Communities Fund via Arun District Council (£0.7 million) and Railway Heritage Trust (£100,000). It was also the intention to create and lease premises within the station, incorporating an ultra-fast digital hub for start-up businesses and freelancers. It is hoped the substantial office space presently available for rent will be let by the summer.