A day out in Yorkshire reveals revived ambitions

Think ‘Bombardier’ in the UK and the immediate association is with rolling stock. Yet the European multinational is also a major player in the global signalling industry.

How come, then, that Bombardier does not have the same presence in the UK signalling market? Time for some genealogical exploration of the consolidation within the European signalling industry over the last 50 years.

Bombardier’s signalling heritage starts with Ericsson of Sweden, pioneer of signalling, founded in 1915. In the UK it extends back to ML Engineering of Plymouth, established in 1957. In 1961, ML Engineering signed an agreement with L. M. Ericsson to be the Swedish company’s sole representative in the UK for railway signalling and associated equipment.

In 1989 Ericsson became EB Signal, which in the same year acquired ML Engineering. EB Signal, in turn, was acquired by ABB, becoming part of ABB Transportation. ABB was itself a merger of ASEA of Sweden and Brown Boveri of Switzerland.

ML Engineering had been the junior member of the triumvirate of British Rail’s signalling contractors, alongside GEC-General Signal and Westinghouse. While ML carried out some signalling projects, including abroad, these ended when the company did not acquire a Solid State Interlocking (SSI) licence.

However its equipment-manufacturing business continued, with products ranging from signal heads to data transmission multiplexing systems. The jewel in the corporate crown was the TI21 jointless track circuit, the TI standing for Traction Immune. 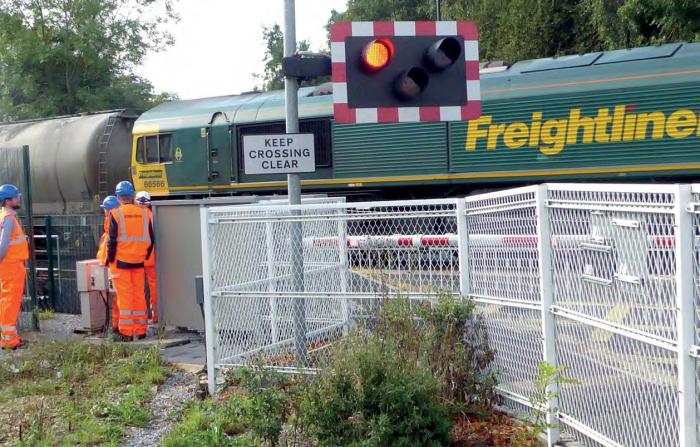 With the privatisation of British Rail, ADtranz expanded its UK presence, buying the Interlogic Signalling design group based at Reading. Interlogic came with an SSI licence, but since ADtranz already had the EBI Lock Computer Based Interlocking (CBI), the licence was sold on to W. S. Atkins.

EBI Lock was selected by Railtrack for one of its ill-considered and ill-fated CBI pilot schemes. It was also mooted for Thameslink 2000 signalling in preference to SSI.

Railtrack assumed that the success of the pilot scheme interlockings would herald a new generation of signalling technology: but all three crashed and burned. Bombardier’s EBI Lock trial at Horsham had the additional handicap of being formally inaugurated by Captain Deltic on a sunny afternoon in 2002.

There is one more piece of history. Rather like Alstom with Signalling Solutions, Bombardier had formed Infrasig, a joint venture with a civil engineering contractor to bid for turnkey signalling projects. Unfortunately, the civils partner was Carillion and now Bombardier’s UK signalling activities are firmly back within the responsibility of its in-house Rail Control Solutions (RCS) arm.

I must confess that with the distractions of European Train Control System (ETCS) and Traffic Management, plus the end of Infrasig, I had lost visibility of Bombardier’s signalling activities. That was until last September when I was invited to see the company’s latest product to be installed on the UK network – the EBI Gate 2000 MCB-OD level crossing system. The site visit, looking at some new tech, would be followed by an overdue update on Rail Control Systems (RCS) activities over coffee and sandwiches.

One of the contracts won by Infrasig was the replacement of four life-expired Automatic Half Barrier (AHB) level crossings between Shaftholme Junction and Knottingley with Manually Controlled Barriers with Obstacle Detection (MCB-OD). Commissioned from April 2018, the first crossings ran in shadow mode for six months before entering service.

The route carries a steady stream of freight traffic, in particular fuel for the Yorkshire power stations.

First stop on my visit was Selby Road crossing on the busy A19 road. Inside the compound, the crossing’s relay interlocking has been retained in its original brick building. Control equipment for the EBI Gate 2000, which interfaces with the existing interlocking, plus its power supply equipment, is housed in a walk-in ‘hut’. The power supply includes four batteries providing 10-12 hours of operation in the event of a mains supply failure.

Modular construction means that, if the space is available, the new crossing control equipment can be installed in racks in existing equipment rooms. On the Ferriby to Gilberdyke resignalling scheme, which included nine EBI Gate 2000 crossings, seven locations had huts, which also contained the new signalling and telecommunications equipment. The remaining two were deployed in existing relay rooms.

EBI Gate 2000 uses the standard Honeywell radar, housed in the familiar white ‘egg’. Network Rail developed this system in conjunction with Honeywell, but the manufacturer is no longer supporting such a niche product.

As a result, Network Rail has commissioned development of an ‘OD Mk 2’. Meanwhile, further orders for crossings can draw on a stock of around 30 units already built.

COD units are housed in boxes mounted between the two tracks. These scan the crossing for people or objects on the crossing, before the approach signal can be cleared.

A requirement in the original MCB-OD specification included the ability for the LIDAR to detect a small child lying prone. More recent risk assessments have removed that requirement. A third level of detection is provided by inductive loops under the road service which can detect a stationary car.

From Selby Road the next stop was Norton signal box, which controls one of the four MCB-OD crossings, plus two closed circuit television-monitored crossings and the adjacent MCB. The signaller controls the EBI Gate crossing through a seven-inch touch screen installed in the push button panel. On the Ferriby to Gilberdyke resignalling scheme, with its new interlocking, the level crossings are controlled from the Westcad workstation at York ROC.

Arriving at Norton box we passed the barrier equipment, with the barrier operating mechanism and counterweights exposed. I remembered that the similar components back at Selby Road had been enclosed in mesh panels (as shown in the photo at bottom right).

Here is a classic example of the UK ‘gold-plating’ European Directives. It turns out that to comply with the EU Machinery Directive, the new crossing’s moving parts have had to be enclosed. The Office of Rail and Road’s argument was that a small child might escape from a parent while the crossing was closing, run over and stick his or her head in the mechanism.

As a result, the mesh enclosures you can see have had to be custom made. But, surely, with around 1,000 EBI Gate 2000 units supplied since the first entered service in Poland, such guards are standard fitments on European railways? (I’ll just set that in Sarcastic Italic shall I? – Ed.)

You might think that a new level crossing was an odd choice of kit to choose when bringing me up to speed on RCS’s current activities. However two elements of Network Rail’s long-term level crossing strategy are:

◼ prioritising the removal of AHBs near to stations and schools. 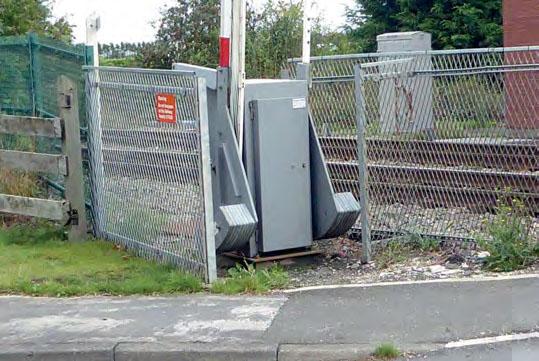 Crossing barrier: in this example, the operating mechanism and counterweights are exposed.

There are around 400 AHB crossings on the network: in the current Control Period (2019-24), Network Rail’s signalling work-bank includes over 200 upgrades. With devolution these schemes are driven at Route level. With a standard, proven product, Bombardier reckons there are some 60-100 potential opportunities – either directly or as supplier to one of the Signalling & Telecomms Framework contractors.

Meanwhile, the Plymouth factory continues to manufacture a range of products for both the domestic market and export. Such is the reputation of the original TI21 track circuit that, while the 21st century digital version has been rebadged ‘EBI Track 200’, the transmitter case still carries the TI21 designation. Export sales include railways that are life-extending signalling while introducing new electric traction.

Building on the TI21 is the EBI Track 400 coded jointless track circuit, suitable for AC, DC or dual-voltage electrification. Bombardier claims it meets the ‘need for all known track circuits’ with audio frequencies available for metro and main line application. It is also backwards compatible with TI21 infrastructure.

Alongside the growing demand for track circuits, Bombardier is currently seeking UK approval for an axle counter developed by its Polish company. Testing is taking place at Crewe.

My previous meeting with Bombardier’s signalling team was when Infrasig was one of the organisations demonstrating its products at the press launch of Network Rail’s ETCS National Integration Facility (ENIF) in 2014. Subsequently Infrasig was a bidder for the contract to install ETCS in the southern section of the ECML. This contract has only recently been awarded.

While now a Tier 3 player in the UK signalling market, Bombardier’s RCS still sees substantial opportunities for its technology and products as a supplier to the major framework contractors. Equipment supply is also supported by the Group’s Installation Test & Commission (ITC) organisation.

In addition to UK schemes, ITC has also supported projects in Sweden and Poland. There is scope here to ‘do a lot more’, supporting Network Rail’s Tier 2 Signalling & Telecommunications Framework Contract holders. a 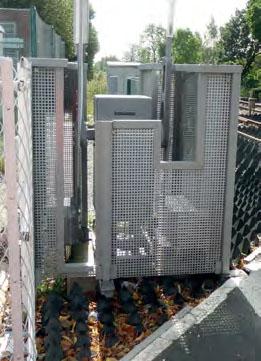