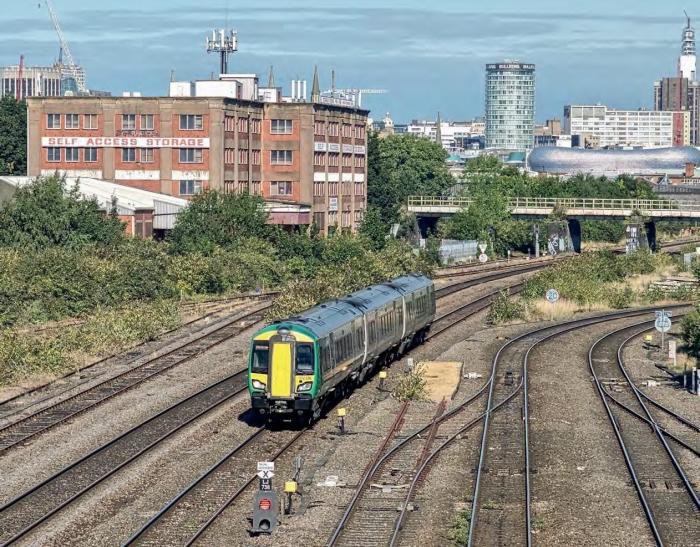 Bordesley: unit No 172336 has just passed under the Camp Hill line while en-route from Birmingham to Stratford on 27 August 2017. The proposed chord would run from the Camp Hill line to Snow Hill, adjacent to Selfridges – the dome-shaped roof of this store can be seen in the background.
John Whitehouse

The application for ‘193 Camp Hill’ (the current Sulzer site adjacent to Bordesley station) includes construction of 480 homes, a hotel and flexible business/commercial floorspace of 1,480 square metres. This site is adjacent to the potential alignment for the Bordesley chords and includes an energy facility building (to supply utilities to the development) that would occupy a triangle of land that is in Network Rail’s projected path of the west/south chord.

In September 2018 Transport for West Midlands, West Midlands Rail Executive and Network Rail announced that they intended to build and reopen railway stations at Moseley, Kings Heath and Hazelwell on the Camp Hill line, with the expectation that the stations would be open in time for the 2022 Commonwealth Games. Whilst an initial service may be provided over the diesel-only line by diverting some long-distance services from Hereford and Worcester to Birmingham, a more frequent service depends on the new chords, as do other proposed services which would be diverted from New Street to run via Moor Street as part of the Midlands Rail Hub plans.

The West Midlands Rail Executive, Transport for West Midlands, Midlands Connect and other Rail User Groups confirmed their objection to the planning application, but as Executive Director (WMRE) and Director of Rail (TfWM) Malcolm Holmes told Modern Railways, the state of the railway project makes a formal objection difficult. ‘At the current (Strategic Outline Business Case preparation) stage of the Midlands Rail Hub scheme, it is not possible to determine exactly what the land requirement for the south west chord will be with 100% certainty at the present time’ he explained. ‘The concern is that, whilst the Midlands Rail Hub is still at this early development stage, it makes it difficult to find grounds to make a formal objection to the proposed “193 Camp Hill” development which would carry sufficient weight with the planning authority or with a planning inspector. WMRE is nevertheless requesting that the decision to award planning permission to any development on, or adjacent to, any of the potential locations of the Bordesley south west chord be deferred by the planning authority until after the final alignment for the chord has been formally approved by Network Rail, the planning authority and Midlands Connect.’

Speaking to Modern Railways, West Midlands Mayor Andy Street agreed that all parties need to work together to find a solution, and that the application should be modified, stating ‘Absolutely categorically that should be the case. Initially the Moseley, Kings Heath line can come as a service into New Street without the opening of the Bordesley Chord, but we do need to protect the Bordesley Chord for the long-term improvements to the service.’

Mr Street also agreed that routing services into New Street would take up valuable capacity which would be an issue as further services are introduced on other routes.