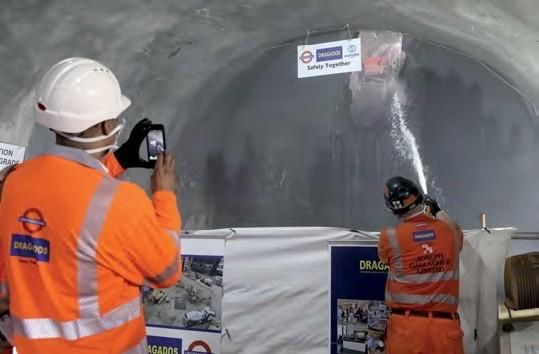 Breakthrough: a worker at Bank captures on his mobile the moment the exit to Cannon Street becomes visible.

TRANSPORT FOR London reported a key milestone in the Bank station upgrade project on 15 March with the first breakthrough between a new entrance on Cannon Street and the newly constructed Northern Line tube tunnel.

Contractor Dragados is working with TfL on the scheme, which targets a 40% capacity increase at the station by 2022. The principal element of the scheme is the construction of a new southbound tunnel for the Northern Line, enabling the existing tunnel to be converted into a customer concourse. The upgrade project will also deliver 12 new escalators, with a new moving walkway link between the Central and Northern Lines, and step-free access will be provided to the Northern Line for the first time. TfL says almost all tunnelling has now been completed on the new southbound Northern Line route, with over 1,000 metres of tunnels excavated so far. Excavation has involved the use of diggers as the confined tunnel space prevented the use of a tunnel boring machine.

Excavated material has been repurposed and transported to Dartford, where it is being used as part of a housing development. A closure of the Bank branch of the Northern Line between Kennington and Moorgate in 2021 will allow the tunnelling to be completed, as the new southbound tunnel is connected to the existing railway.