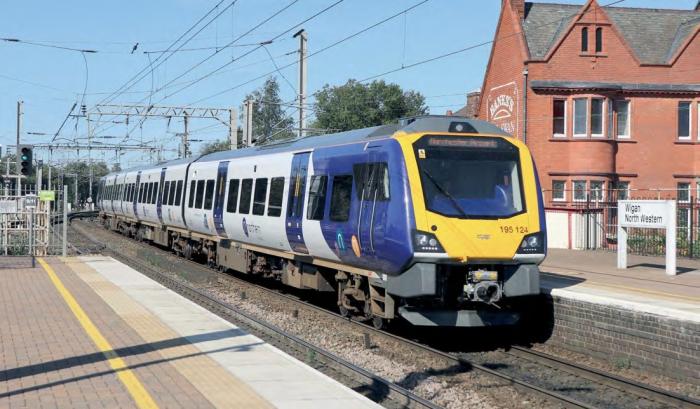 One network for Manchester: new Class 195 DMU No 195124 on a Barrow-in-Furness to Manchester Airport working calls at Wigan North Western on 20 September 2019. Tom McAtee

MASTERPLAN released by Mayor of Greater Manchester, Andy Burnham, includes proposals to double the number of rail journeys in the city-region by 2040.

The plan aims to triple the use of Metrolink, deliver multimodal zonal ticketing and rebuild trust with a locally accountable rail service branded GM Rail.

Under a two-stage plan, by 2025 current rail franchises would be reshaped to provide a much simpler service offer for the Greater Manchester City Region and its travel-to-work area, with simpler multimodal zonal ticketing.

Existing capacity enhancement commitments would be delivered, including the Castlefield corridor, the Trans-Pennine Route Upgrade and Salford Central station. Eight-car trains would call at lengthened platforms whilst on Metrolink more double trams would operate across the network. A pilot scheme using tram-train technology would better connect all rail modes and make best use of the current network.

Between 2025 and 2040 GM Rail would be created, delivering locally controlled local rail services and stations accountable to local people and responsive to local priorities. Metrolink would be expanded through new branches and extensions, conversion of National Rail lines and tram-train technology. High-capacity, high-frequency rail-based ‘metro’ services would be introduced on key commuter corridors and a ‘regional-centre metro tunnel’ would provide additional capacity to accommodate future rail demand to and through the regional centre. HS2 and Northern Powerhouse Rail would in turn transform city-to-city links across the north of England, the UK and globally via Manchester Airport.

The GM Rail plan aims to mirror the patronage growth seen on Metrolink services in recent years. A turn up and go service frequency of at least four trains per hour is proposed on routes that can accommodate eight-car trains.

The plan acknowledges this would require investment in infrastructure, including passing loops and four-track sections, enhancements to signalling (to increase line capacity and improve traffic management) and removal of network pinchpoints (grade separation of junctions). A high-capacity metro system would be important in delivering additional passenger capacity as well as releasing capacity at key pinch-points on the network for improved services on lines where metro conversion is not an option. Tony Miles

THE LIBERAL Democrat MP for Westmorland and Lonsdale, Tim Farron, has hit out at the cancellation of electrification of the Lakes line between Oxenholme and Windermere.

Electrification of the line was announced in August 2013 as part of a wider programme during Control Period 5 (2014-19), but cancelled in July 2017.

Mr Farron spoke to Modern Railways at an event on 21 August marking the introduction of Northern’s new Class 195 DMUs on the line. ‘The reason Chris Grayling gave for the cancellation was that it was too expensive, but we worked out afterwards that they had applied a kind of “one size fits all” analysis of what it would have cost to electrify the Lakes line’ he said. ‘That was based on an assumption that trains were passing every two minutes, running at over 120mph and all the rest of it… the reality is that this is a very easy, very simple, very inexpensive electrification.’

Mr Farron expressed anger at the Government’s suggestion that electrification was opposed by local groups because of the visual impact of the catenary on the local countryside. ‘The Lake District National Park Authority… were appalled that the Government had used that as an excuse because the National Park fully support electrification of the Lakes line and have never raised any objection over the visual impact.’

The MP also called for a significant increase in service frequency on the line, which would be enabled by the reinstatement of a passing loop at Burneside. Tony Miles

THE NEW station at Worcestershire Parkway, where the North Cotswold route crosses the Birmingham to Cheltenham line, is on target to open at the December timetable change.

Worcestershire County Council reports all major construction is now complete and is hoping a series of safety tests run without any problems.

The entry into service period involves testing and commissioning equipment and services at the station, as well as carrying out staff training.

The new station will have 500 car parking spaces with provision to add a second deck later if required, doubling the number of spaces to 1,000. It also has 25 electric car charging points, two bicycle shelters and parking space for motorcycles.

Car parking tariffs are still to be decided. There will be a retail area, which will be let out by GWR. The station will be served by GWR’s Cotswold line services between London and Worcester on the high-level line, with a single platform, while CrossCountry’s Cardiff to Nottingham services will call at the pair of low level platforms on the Birmingham to Cheltenham line. The county council and partners are looking to add stops in other CrossCountry services as well as increasing frequencies on the North Cotswold line from one to two trains per hour. Steve Widdowson 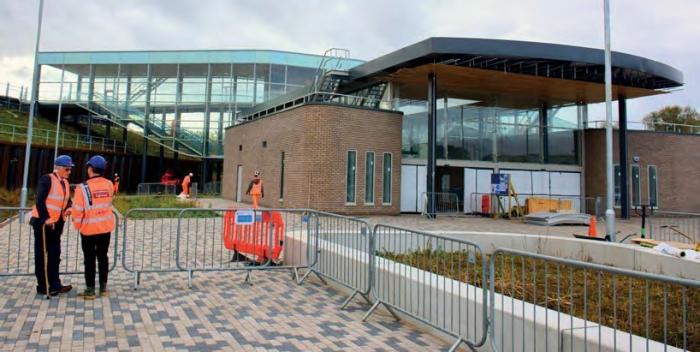 Getting ready for public opening: Worcester Parkway station during a press visit on 9 October 2019. Steve Widdowson

CAF IS to build 21 trams for the West Midlands Metro network, with the option for a further 29.

The order will supplement the current fleet of 21 Urbos trams, also built by the manufacturer, and support future extensions to the network. The first new trams are scheduled for delivery in late 2021. They will be fitted with batteries to be capable of catenary-free operation, to be introduced on parts of the West Midlands Metro in future. The contract, valued at £83.5 million, also includes technical support services and the supply of spares for a 30-year term.

A battery management service agreement will provide long-term maintenance, repair, overhaul and renewal of the on-board batteries over the same period.

The current fleet is being fitted with lithium-ion batteries in preparation for the opening of the first catenary-free section as part of the Centenary Square extension, due to open in December. CAF says the new fleet will be equipped with a similar on-board energy storage solution, enabling the trams to operate without overhead wires on parts of the network. Further extensions are due to open to Wolverhampton station in 2020 and Edgbaston in 2021, with work soon to begin on the Wednesbury to Brierley Hill extension. 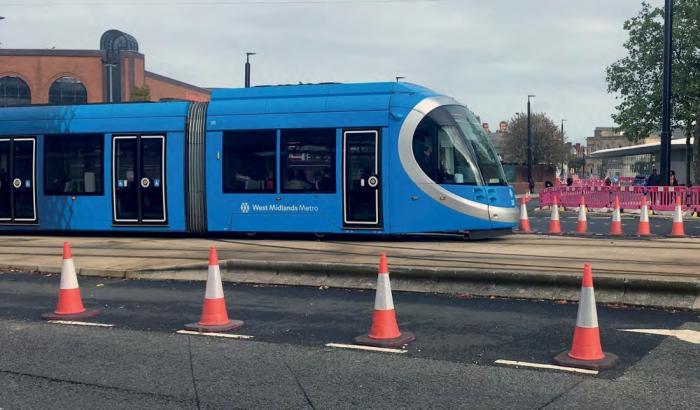 Wolverhampton station extension: a tram passes the junction on 4 October 2019. Off to the left of the picture is the existing terminus at St George’s, while in the middle distance is the new bus station and behind that the railway station, which together will form a transport interchange with the new tram line. James Abbott