HAUGHLEY ALSO ON WISHLIST, BUT TROWSE IS LOW PRIORITY 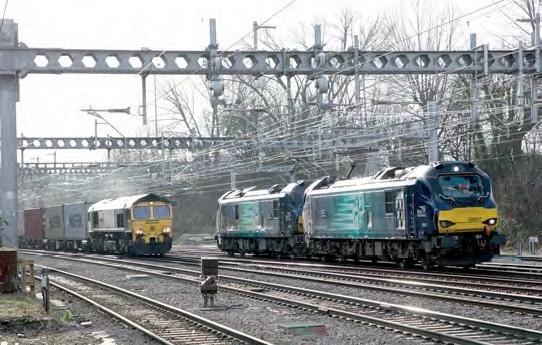 Busy Great Eastern: Direct Rail Services’ loco Nos 88007/008 arriving at Shenfield platform 4 with the 0Z34 Willesden Brent Sidings – Ipswich working on 18 February 2019. In this shot the light locos, there on a filming assignment and thought to be the first visit to the GE by the class, were being overtaken by No 66533 with the 4L97 05.00 Trafford Park – Felixstowe North container service. Antony Guppy

REMODELLING OF Bow Junction is emerging as the most urgent enhancement needed to provide additional capacity on the Great Eastern main line.

Network Rail’s Strategic Planning Leader James Bradley told a Rail in the East conference in Ipswich of the emerging work from the Great Eastern main line study, with NR and partners looking to update work dating from the previous Route Study in 2016. He said the main change since the Route Study is the new Greater Anglia franchise, with its plan to introduce new trains from Bombardier and Stadler that will increase capacity.

Mr Bradley explained the additional seats offered by the new trains defer the urgent need to enhance infrastructure on the GEML, potentially reducing the need for two additional services into London Liverpool Street in the morning peak by 2033 (from Colchester and Ipswich). The study used two growth trajectories, a baseline incorporating standard Department for Transport measures, and a forecast based on a higher level considered more appropriate to the GEML. However, without timetable changes the study still showed additional capacity will be needed from Colchester into London by 2024, with further additional capacity required through to 2043.

In terms of infrastructure options, the current layout at Bow Junction restricts capacity into Liverpool Street to a maximum of 22 trains per hour (tph), and remodelling could offer a major capacity uplift of up to 10tph. The next emerging priority scheme would be additional track capacity between Shenfield and Colchester, with various options under consideration, which could include loops at a proposed new station at Beaulieu Park, north of Chelmsford. Doubling of Haughley Junction would primarily benefit freight services from Felixstowe but would also boost reliability of passenger services, Mr Bradley explained. Trowse Swing Bridge, identified as a priority in the Route Study, has not emerged as a priority scheme in the latest study as it can accommodate future GEML capacity requirements, although Mr Bradley noted the study considers only Norwich to London services and does not include the impact on cross-country routes to Ely and beyond.

Mr Bradley said in the short term the decision has been taken to first assess the impact of GA’s new fleets, noting no optimisation assessment had been made of the GEML timetable, which could shape the order in which enhancements would be required. A project board meeting is expected to review a draft study in late March, with further review by members of the Great Eastern main line Task Force prior to publication.

CAMBRIDGE AND CLACTON RESIGNALLING IN CP6

Network Rail’s Anglia Route Managing Director Meliha Duymaz outlined to the conference the Route’s plans for Control Period 6 (2019-24). Anglia Route has been allocated £1.2 billion for renewals and £1 billion for operations and maintenance during the five-year period, 21% more than in CP5.

Ms Duymaz explained NR would spend £400 million on track, with a particular focus on the Great Eastern main line. £350 million will be allocated to signalling and level crossings, with major resignalling schemes planned for Cambridge and Clacton, while NR plans to close over 100 of the 849 level crossings on the route during CP6. Spending of £250 million on structures will include the renewal of Cattawade Creek viaduct at Manningtree and work on the station roof at Liverpool Street