Welsh services could be diverted to Manchester Victoria

DISCUSSIONS OVER short-term resolutions to congestion on the Castlefield corridor in Manchester are ramping up. However, finding quick wins is proving difficult as industry experts have now suggested other nearby sections, Manchester Piccadilly to Slade Lane Junction and from there to both Stockport and Manchester Airport, also appear to meet the criteria for designation as Congested Infrastructure. Transport for the North is continuing to press for this to happen as it strengthens the case for faster delivery of infrastructure improvements. 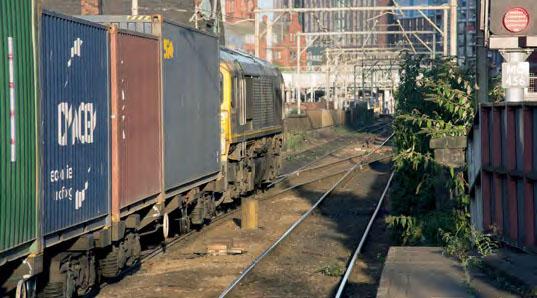 Boxing clever: one option being explored is the removal of freight trains from the Castlefield corridor at peak times. A Freightliner service negotiates the congested section between Deansgate and Oxford Road on 13 September 2019. Tony Miles
Tony Miles

Accepting that ‘difficult decisions’ need to be made about the December 2020 timetable, one industry insider told Modern Railways TfN’s members accepted service removals in principle as long as they don’t affect services they use, adding ‘clearly a lot more work will be needed for December 2021’. It is understood TfN is supporting proposals to move TfW Rail services from Chester and North Wales, which run over the Castlefield corridor, to terminate at Manchester Victoria instead, and it is also keen to see Trafford Park freight services removed from the corridor at peak times. Achieving either of these measures would, in the words of one local expert, ‘Not be a silver bullet but just slightly better than now’.

TfW Rail does not have firm rights to run to Manchester Airport, but any change to its services would be seen as ‘contentious’, with capacity at Victoria also at a premium and turning back trains there requiring additional platform occupation. An alternative would be to run the TfW Rail trains on to Wilmslow, still using Castlefield but reducing occupation at platforms at the airport.

Whilst removal of the freight trains at key times is seen by stakeholders as ‘an immediate amelioration measure’, with many questioning why they are running when capacity is at such a premium, Network Rail points out this is not simple. Removing such trains from Manchester in the peaks means they will hit other parts of the network at peak times, and any changes would be reliant on goodwill from the freight operators because there is unlikely to be any commercial incentive for them to do so.

A proposal put forward to split the Liverpool to Crewe stopping service, which regularly picks up delays on its long journey and imports them into the corridor, was ‘not welcomed universally at TfN’ with some members happy to accept it but others not, even though there is a view that this move would deliver tangible benefits.

It is understood some operators within Network Rail have proposed a more radical plan to switch TransPennine Express Manchester Airport services back to a reversal in the main trainshed at Piccadilly, using the original route via Guide Bridge to Stalybridge. However, this would also be complex with timetables at Slade Lane and Ardwick having been rewritten following the move by TPE to the Ordsall Chord route, and whilst this has created congestion through Castlefield it has delivered significant improvements within the Piccadilly shed – an intended consequence of the construction of the chord. This change would also remove almost all services from the Ordsall Chord, constructed at a cost of £85 million, exposing the folly of building the chord without the rest of the proposed infrastructure work.