As Fluff Freeman (almost) used to say on Pick of the Pops, ‘Greetings TIN pickers, jumping straight into the charts at number three this period is Hitachi’s latest hit, the Class 385. Very popular in Scotland, not arf’. With 35 units in service and a starting Miles Per Technical Incident (MTIN) of 8,460, we now have a sense check, and competition, for the Siemens Class 700 fleet on GTR.

This was indeed the case with the first ‘step’ covering Periods 6-8. However, GTR tells me that the subsequent improvement to a consistent 14,000-plus was the result of sorting out problems with the closed circuit television (CCTV) cameras. As a side exercise, this month I have calculated the improvement in moving annual average for the fleets in the table. Biggest gain was for the Hitachi Class 802 fleet at 18% followed by South Western Railway’s chart-topping (That’s enough Alan Freeman for one month – Ed) Siemens Class 707 fleet at 13%. Transport for London’s reduced-length Bombardier Class 345s gained 11%. In contrast, the long-established Class 700 and 800 fleets both recorded a 3% gain. This is to be expected as checking back shows that neither fleet now has any Periods of poor performance to drop out of the MAA. As a result, to move the MAA upwards you need to start turning in the big numbers, as SWR is achieving with the Class 707s.

Something the Modern Railways team spends a fair amount of time on is trawling official websites for useful stuff. Even evasive written answers to pointed parliamentary questions may let slip a piece of the jigsaw we are assembling. If not, ‘Blood and Custard’ awaits. One of my beats is the section of the Network Rail website containing the Variable Track Access usage price list where, Ahab-like, I have been pursuing the mythical data for the Intercity Express Programme – now the Class 800 series – trains since 2011. 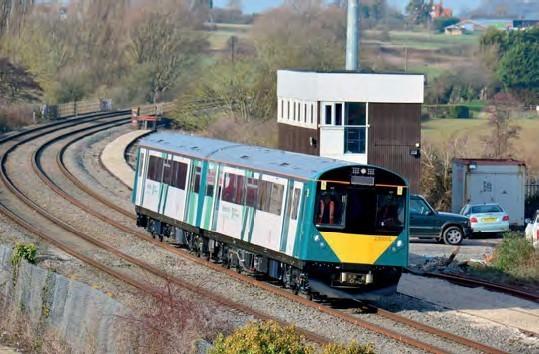 Bound for the Marston Vale line: D Train No 230005 at Evesham on the North Cotswold line during its first day of main line test runs between Moreton-in-Marsh and Evesham, 13 February 2019.
Steve Widdowson

Into the table: Class 385. No 385103 was caught by the camera at Gartshore loop while working the 12.00 Edinburgh Waverley – Glasgow Queen Street on 10 December 2018.
Steven Fraser

I say mythical, because many and varied have been the numbers since the hapless Theresa Villiers, then a Transport Minister, piqued my interest in a written answer containing numbers which were beyond wrong – some flattering IEP and others making it look a very bad buy indeed.

As explained in an earlier column, working out a simple formula has provided difficult because of different 800 Series configurations, axle loads, changes to bogie specification and, most recently, the requirement to fit filters (chokes) to the powered vehicles. But, according to informed sources, resolution may now be only months away.

However, my latest search did add some new trains to the list. Not least, the ScotRail Class 385s, the Northern Class 769 bi-modes and even the Vivarail Class 230s. So in Table 8 I have listed the EMUs in approximately ascending order of cost per mile for the motored vehicles.

Obviously, the price is based on a range of factors, from suspension parameters to axle load. But it is interesting to note the variation between the three Desiro City classes. Packaging of equipment is a factor to note. Longer trains have more vehicles over which essential stuff can be spread, reducing individual vehicle weights. In this respect, it is informative to compare the Class 395 and the Class 385. Obviously the Class 395’s stiffer bogies for 140mph running have an effect, but to reduce the Variable usage charge for a six-car train of 9.85(M)/9.53(T) to the charges shown in Table 8 for the three- and four-car Class 385s is quite an achievement.

Following up my February review of new train deliveries and the accessibility status of the heritage stock they are replacing, Eversholt reminded me that its Class 315s are also PRM-TSI compliant. Could come in handy for some operator!

Also, my old chum David Powell at Merseytravel expressed surprise that I did not include his new Stadler Class 777 units in the table. In fact, the new trains were not forgotten; the analysis was focused on fleets due to be delivered in 2019 and the first of his custom-designed trains is due to enter service in February 2020. Be careful what you wish for, David!