THE NEWQUAY branch was closed for two weeks during November due to a collapse near St Blazey Bridge level crossing. The line beyond this to Pontsmill and onto Newquay runs along an embankment with a river running alongside it. Heavy rain caused the river to flow much faster than usual and undermine the embankment, causing a slippage and exposing the sleeper ends. 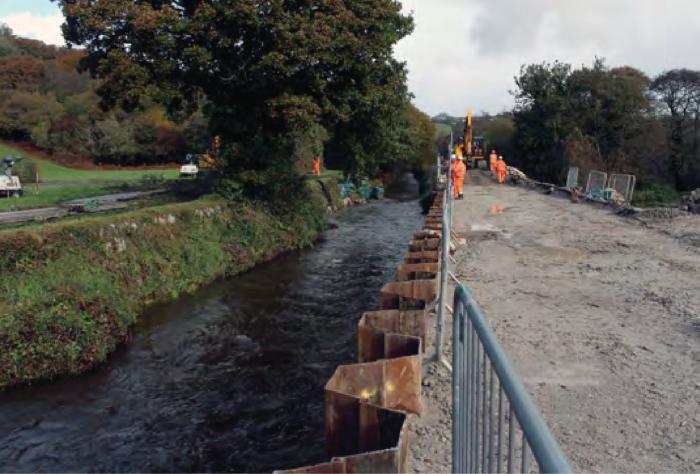 Sorted: sheet piles separate the trackbed of the Newquay line from the river at the site of the collapse.
Craig Munday

Contractor Balfour Beatty was engaged to carry out the repair. Challenges included restricted site access: access was only possible through an Environment Agency dry storage reservoir (a type of flood prevention reservoir that is empty in dry weather), with a temporary bridge installed to cross the watercourse which feeds the dam. Further hampering the repair was concern about the weakness of one of the banks of this watercourse, which if breached would have caused extensive flooding.

Atrocious weather put paid to plans to create a dry working area to allow the installation of a new retaining wall. Instead, a piled solution was chosen, consisting of two rows of sheet piles with tie bars linking them. The works commenced on Wednesday 6 November and were completed over the weekend, with the line reopened on Monday 11 November.