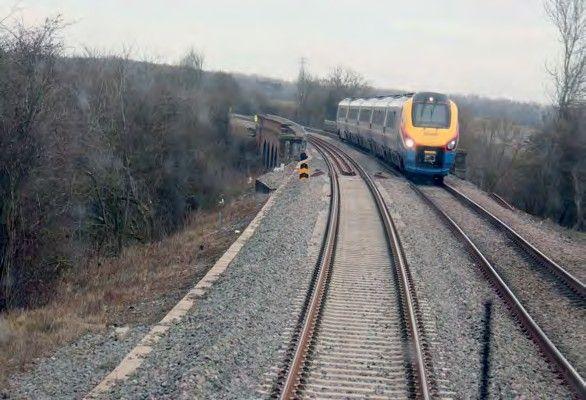 Second track on the Corby line: this view at Harpers Brook viaduct was taken from the inspection saloon Caroline, which travelled over the line on 9 March 2018. Philip Sherratt

NETWORK RAIL completed double-tracking of the seven-mile branch from Kettering to Corby during a week-long blockade in February.

Part of the Midland main line upgrade, the work has seen NR strengthen and improve 14 structures, lay 12km of new track, improve 15km of embankment and install six signal gantries. The linespeed on the route has also been increased to as much as 90mph in places. Additional signals are being provided on the section north from Corby to Manton Junction to increase freight capacity on this important diversionary route.

The MML project is planned to deliver an electrified railway between St Pancras and Corby by December 2020, with sufficient capacity to enable a sixth high-speed path out of St Pancras. The key enabler to the additional capacity on the main line is provision of a fourth track between Kettering and Sharnbrook, making the MML a four-track railway throughout south from Kettering.

Other work is taking place on the section north of Kettering, for which electrification has now been cancelled. A series of upgrades will enable a journey time cut of three minutes between London and Sheffield. The Derby resignalling project, scheduled for this summer, will deliver linespeed improvements around the station, and a parallel project at Leicester to renew switches and crossings south of the station will increase linespeed here from 15mph to 30mph, with the southbound increase due for commissioning later this year and the northbound line in early 2019.

A further component of this is the project at Market Harborough to straighten the platforms and increase linespeed. NR’s Project Sponsor for the MML upgrade, Spencer Gibbens, told Modern Railways this project was affected by the collapse of Carillion, as NR was about to let the contract at the time the firm went into liquidation. He said NR is now in discussions with Amey, which has taken on a number of Carillion contracts, and hopes the work will still complete by spring 2019. A week-long blockade in February 2019, similar to that on the Corby line, will be used to deliver the key elements of the track straightening. Carillion was also contractor for the Corby capacity project, but as this was at an advanced stage work was able to continue.

Meanwhile, Mr Gibbens confirmed to Modern Railways that work to upgrade the overhead wires south of Bedford for electric trains to run at 125mph is currently due for completion in December 2023. However, with the Department for Transport intending bi-mode trains to be introduced in the next franchise from late 2021, NR is looking to bring this work forward by a year. The wires on this stretch were installed as part of the ‘Bedpan’ electrification for Thameslink services in the 1980s, and have a 100mph design speed, although East Midlands Trains’ diesels currently run at up to 125mph on this stretch.