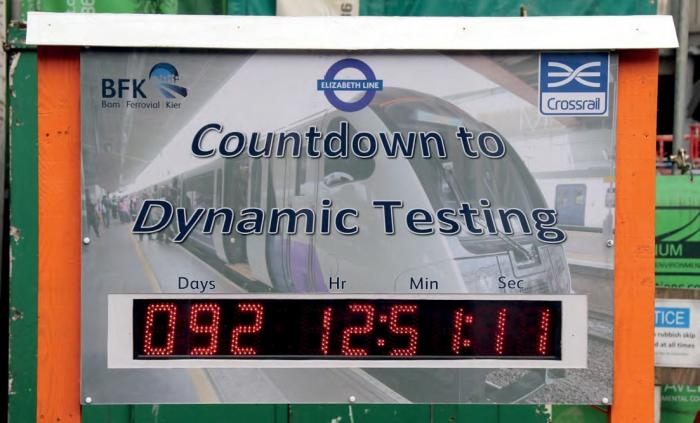 THE REVISED autumn 2019 opening date for the central section of the Elizabeth Line can ‘no longer be committed to at this stage’, Transport for London has said.

On 31 August 2018 Crossrail Ltd announced the central tunnelled section of the Elizabeth Line would not open as planned in December 2018, giving the revised date (p10, October 2018 issue).

Now Crossrail Chief Executive Mark Wild, the company’s third in 2018, is reported to be ‘working on a robust and deliverable schedule’. Explaining the further delay, TfL says ‘It has now become clear that more work is required than had been envisaged to complete the infrastructure and then commence the extensive testing necessary to ensure the railway opens safely and reliably’.

Assessing the state of the project, Mr Wild said: ‘It is evident that there is a huge amount still to do. Stations are in varying stages of completion and we need time to test the complex railway systems.

This means that I cannot at this stage commit to an autumn 2019 opening date. My team and I are working to establish a robust and deliverable schedule in order to give Londoners a credible plan to open the railway and provide a safe and reliable service. Once that work is completed we will then be in a position to confirm a new opening date.’

On top of this, TfL says that ‘core elements of the infrastructure being delivered by Crossrail Ltd, including the stations and the fit out of the tunnels, are at varying stages of completion and more funding is therefore required to complete it, as well as the extensive safety and reliability testing needed for the new railway systems’. The first announcement of additional funding came in July 2018, when joint sponsors TfL and the Department for Transport each contributed half of the £300 million allocated towards the central section.

After the delayed opening was announced in August, Mayor of London Sadiq Khan asked TfL to commission independent reviews into Crossrail Ltd’s financing and governance arrangements. KPMG was appointed to do this, and on 10 December TfL said these reports were nearing completion.

The emerging findings of the review have allowed the Mayor and the Government to agree a financing package to cover the predicted overspend. KPMG suggests the likely capital cost impact of the delay announced in August could be in the region of between £1.6 billion and £2 billion. Subtract the £300 million already committed, and there is a shortfall of between £1.3 billion and £1.7 billion.

THE FALLING AND RISING COST OF CROSSRAIL 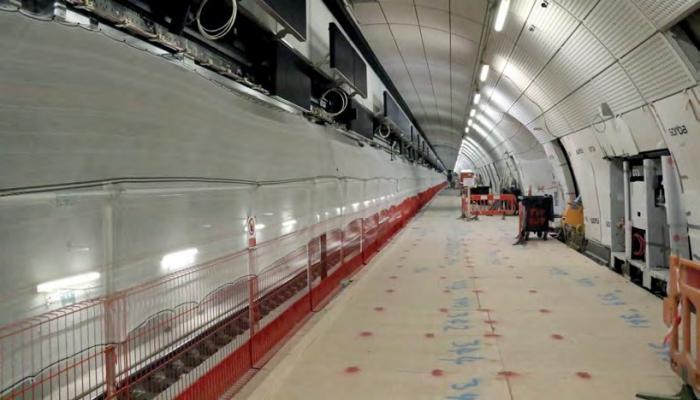 The package agreed replaces the £350 million interim financing package offered by the Government in October (p95, last month). The Greater London Authority will borrow up to £1.3 billion from DfT, and will repay this loan from the existing Business Rate Supplement (BRS) and Mayoral Community Infrastructure Levy (MCIL). The GLA will also provide a £100 million cash contribution, taking its total contribution to £1.4 billion, which it will provide as a grant to TfL for the Crossrail project.

But with the final costs yet to be confirmed, further contingency is already in place. A loan facility from DfT of up to £750 million can be called upon should the higher end of the estimate be realised. Altogether, the overall funding envelope for Crossrail is now £17.6 billion. There is another potential sting in the tail – the delays and budget overruns could impact London’s hopes for Crossrail 2.

With Government having stated that London must fund 50% of the cost of a second new line, TfL has noted that both the BRS and MCIL funding streams, from which the £1.3 billion loan from DfT will be repaid, form part of London’s proposal to meet this challenge.

TfL says the Mayor ‘remains fully committed to the Crossrail 2 project’, adding that further discussions will be needed once a route option has been agreed and there is a known cost for the scheme, in advance of the Government’s Comprehensive Spending Review. Meanwhile, a revised draft of TfL’s five-year business plan through to 2023-24 now incorporates an estimate around the potential loss of revenue from the delayed opening.

A ‘cautious planning assumption’ in the plan is that revenue will be reduced by around £600 million, which TfL says will be offset by continuing savings and revenue growth programmes and by allocating a small proportion of business rates funding to operating account. TfL also says it is exploring with DfT the possibility of beginning to operate Reading to Paddington services ahead of the completion of the Elizabeth Line to help provide a boost in revenue.

MORGAN OUT, MEGGS IN

Less than a week before TfL announced the further delay and cost increase, Crossrail Ltd Chairman Sir Terry Morgan resigned. TfL has confirmed that, subject to ratification by the Crossrail Ltd board, his replacement will be Tony Meggs.

The announcement of Sir Terry’s resignation on 5 December followed a radio interview the weekend before when Sir Terry said he expected to lose his job because the Crossrail sponsors – the Department for Transport and Transport for London – were unhappy with delays to the project.

Seventy-year old Sir Terry Morgan has been a constant presence during construction of the Elizabeth Line, having worked on the project for nearly a decade. Like former Crossrail Chief Executive Andrew Wolstenholme, with whom he worked for more than six years, Sir Terry will not see the programme through to completion following the revelations that the project will not be completed on schedule or budget.

Sir Terry had told the London Assembly of his intention to stay with the scheme, despite its difficulties, but in recent weeks his relationship with Mayor of London Sadiq Khan has appeared strained with conflicting accounts of when the Mayor was made aware of the delay facing Crossrail. Mr Khan says he first knew that Crossrail would be delayed on 29 August, but on BBC Radio 4 Sir Terry said he was clear that he informed the Mayor that the Elizabeth Line would not be ready before 2019 on 26 July.

Responding to the news of the potential further delay, the Mayor was clear about his dissatisfaction with the leadership of Crossrail Ltd. ‘I haven’t hidden my anger and frustration about the Crossrail project being delayed’ he said. ‘This has a knock-on consequence of significant additional cost to the project. It has been increasingly clear that the previous Crossrail Ltd leadership painted a far too optimistic picture of the project’s status.’

The Mayor added that he had ‘ordered the release of all Crossrail board minutes in the last five years to provide transparency to Londoners on their decision making’, while highlighting that a new leadership team had been brought in.

Sir Terry’s replacement, Tony Meggs, will step down from his role as CEO of the Infrastructure and Projects Authority (IPA) to oversee the final stages of delivering the Crossrail project. TfL highlights his wealth of experience at the IPA and in leadership positions in the private sector. It says the Crossrail Ltd board will be further strengthened by the nomination of former MP Nick Raynsford as Deputy Chair; Mr Raynsford served as Minister for London on two occasions between 1997 and 2003.

CROSSRAIL: WHO PAYS FOR WHAT?

The agreed funding dating from the Comprehensive Spending Review in 2010 breaks down as follows:

■ £2.3 billion for delivery of surface works by Network Rail, which also finances them.

Crossrail Ltd is responsible for the delivery of the end-to-end railway, including rolling stock, signalling and systems integration, as set out in the Crossrail Delivery Strategy and the Project Delivery Agreement. The estimated capital cost impact confirmed on 10 December is between £1.6 billion and £2 billion and takes the total cost for the central section works to between £14.1 and £14.5 billion. The surface network works were subject to a £290 million increase, announced in July 2018.

In addition, the new trains and depot cost £1.1 billion, financed by TfL.

On 13 December, after this issue went to press, TfL’s Finance Committee was expected to approve a sale and leaseback arrangement for the Elizabeth Line fleet of 70 Class 345 trains.

The plan emerged in January 2018 as a means of helping fund a new fleet of trains for the Piccadilly Line (to be built by Siemens). TfL received round one offers from five bidders on 5 October 2018, before selecting the three most economically advantageous bidders for a second round, and these submitted bids on 23 November.

The arrangement envisaged was a lease of the new fleet of trains for a minimum period of 20 years from the date of financial close (January 2019), but encouraged bidders to offer additional flexibility in the form of options either to acquire the fleet at the end of the lease or otherwise continue leasing the units. TfL expects, subject to necessary approvals and complete of documentation, to conclude the leasing arrangement in late January.