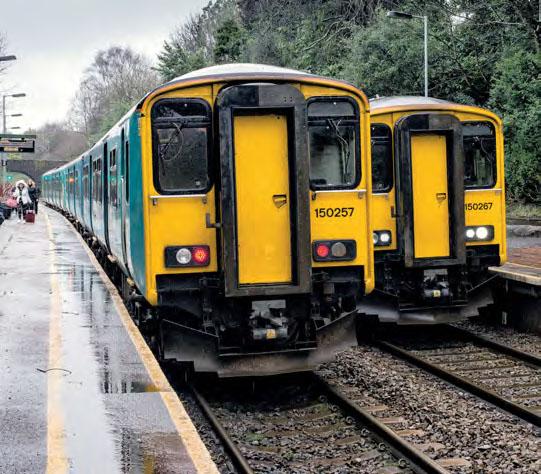 Set for replacement: new fleets for the Core Valley Lines will initially operate alongside Class 150 units, three of which are seen here at Llanishen on 19 February 2020.
Rhodri Clark

EU grant aid covers £159 million of the programme’s cost, providing the Class 398 Stadler Citylink tram-trains commence operation by the end of 2022 on services from Cardiff to Pontypridd and beyond. The programme is delayed because the assets were transferred six months later than planned. The coronavirus pandemic could cause further difficulties.

A Stadler spokesperson said it was impossible to predict how the Covid-19 emergency could affect delivery of the CVL fleets. ‘The Citylinks are made in Spain, where the impact of the pandemic on our suppliers, together with the Spanish Government’s recent decision to lockdown non-essential economic activity, is affecting Stadler more than in other markets.’

Stadler will also supply 24 tri-mode (electric/battery/ diesel) Class 756 Flirt units for Rhymney Valley and Coryton services from 2023. ‘The Flirt trains are manufactured in Switzerland where the factory is operational, in compliance with Swiss Government regulations,’ said the spokesperson. The Flirts’ final design review had commenced as planned in early April.

A TfW spokesman said the intent on all sides was to mitigate any short-term delays to rolling stock with overtime working when normality returns.

Introduction of tram-trains will be phased, an option not available where heavy rail lines are converted to tram operation. ‘Because of the magnitude of the change, it is expected to phase in all the new fleets gradually, meaning they will be operating alongside the existing diesel fleets during the transition period,’ said a spokesman. ‘It is very likely that the introduction of the Class 398 fleets will be a route at a time. However, this will still be a gradual process, a diagram at a time, as the new fleet becomes available.’ Until the full fleet is available, tram-trains will operate at Class 150 speeds and current timetable patterns will be maintained.