Czech open access operator Regiojet ordered eight Traxx MS electric locos from Bombardier in April 2017, with delivery of the first three expected the same year. The first two of the tri-voltage (3kV DC, 15kV AC and 25kV AC) locos were delivered in mid-April 2018 and entered service from 16 May. The locos are designed for operation in the Czech Republic, Slovakia, Germany, Austria, Poland and Hungary, although the first two locos are not currently approved for use in the latter two. An option for up to 20 more locos has been agreed. 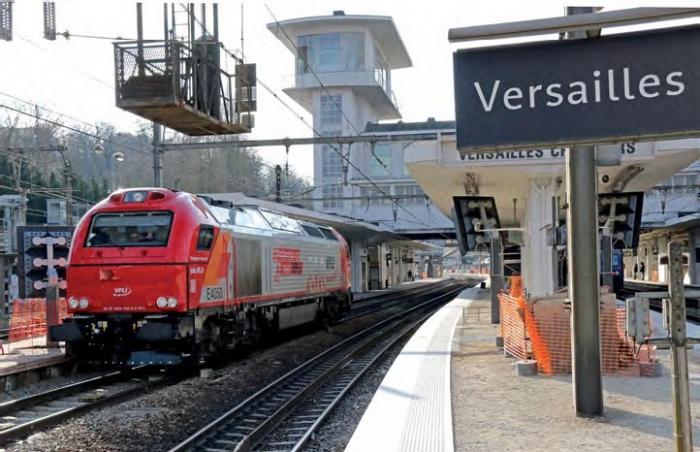 More locos for VFLI: one of the company’s earlier E4000 diesel electrics, No E4050, itself only delivered in early 2017, passes Versailles Chantiers on 26 February 2018.
Keith Fender

Regiojet has reduced the initial order to four locos and plans to use the new locomotives, which are designated F140MS by Bombardier (but like the similar 140km/h Class 186 in use in the Netherlands are actually passed for 160km/h running with passenger services) to replace some of the older Škoda-built Class 162 locos in its fleet and to reduce dependence on leased Vectron locos. The operator currently has four of them on lease from European Locomotive Leasing (and carrying the Regiojet yellow livery), with up to five more on shorter-term contracts.

Regiojet expanded its network to include Vienna from December 2017 and plans to increase the frequency of services on the route in the near future; the multi-voltage Traxx MS locos are ideally suited for this route, where all three of the traction voltages they are equipped for are used on the journey from Prague to Vienna. The new services to Vienna are being operated in partnership with Graz-based rail operator Graz-Köﬂacher Bahn (which like the main competitor, Austrian national operator ÖBB, is owned by the Austrian government!). Regiojet announced a 30% increase in passengers to 1.25 million in the first quarter of 2018, in part due to the expansion of services on the Prague to Brno (to Vienna or Bratislava) route.

In late May Regiojet took the unusual step of announcing – in a press release in English – that it was planning to take legal action in the Czech Republic against Europe’s largest long-distance bus operator Flixbus. The operator has cited unfair competition and predatory pricing with Flixbus’s rail and bus operations due to the company only recovering around 55% of its costs in the Czech Republic for the past nine months. Regiojet, which is now a significant rail operator, started business as a long-distance bus company called Student Agency (rebranded as Regiojet in recent years), which is the largest such operator in the Czech Republic and also operates international routes across Europe. It is clear that growing competition from Flixbus, which has expanded rapidly in many EU countries and is backed by institutional investors in the USA, is causing Regiojet significant concern. Flixbus also co-operates with the Czech Republic’s other significant private open access rail operator Leo Express, operating open access rail services together in Germany on the Berlin to Stuttgart route.

Czech national operator ČD announced in early July it will buy 50 new Siemens Viaggio Comfort inter-city coaches for use on major domestic routes. The coaches are based on those already supplied to ČD for use in ‘Railjet’ push-pull rakes. The new coaches will be formed as five-car, 330-seat rakes with internal solid bar couplings and standard UIC couplings at each end, enabling them to be used with existing coaches to form longer trains when necessary.

Siemens will manufacture the vehicles at its Vienna factory, although final assembly and static commissioning work will be undertaken by Czech company Škoda Vagónka in its Czech factories. The first vehicles should be delivered in March 2019. The contract is worth €115 million to the Siemens/Škoda consortium.