German operator DB, via its Arriva subsidiary, has expanded its open access operations in the Czech Republic and now includes international trains to neighbouring Slovakia. For just over two months in late 2013, Arriva ran open access regional trains from Prague Masarykovo to Kralupy nad Vltavou, north of the Czech capital. It had hoped these services would be integrated into the Prague area fare system so it could gain from carrying passengers with existing season tickets, but this didn’t happen and the service ended relatively quickly.

From February 2016, Arriva began operation of services from Prague to Benesov, south of the city. These trains use ex-DB Class 628 DMUs (overhauled as Class 845s for use in the Czech Republic), and seven train pairs are operated on a commercial open access basis on weekdays; again, Prague area season tickets are not accepted as no revenue sharing arrangement has been agreed. By operating semi-fast trains, journey times are quicker for some journeys compared to services operated by national operator ČD.

Since March 2017, Arriva has introduced new international open access services from Prague to Trencin and Nitra in Slovakia. These services initially ran only at weekends but since April have operated daily for the summer period. Despite journey times from Prague to Trencin of over five hours, the services are also operated by ex-DB Class 628 DMUs. They are routed via Olomouc on the Prague to Ostrava route, meaning there are now four operators offering services on the Olomouc to Prague line (ČD, Regiojet, Leo Express and Arriva). Arriva has announced it will also start running weekend services from Prague to Česky Krumlov in the south west of the country during 2017. 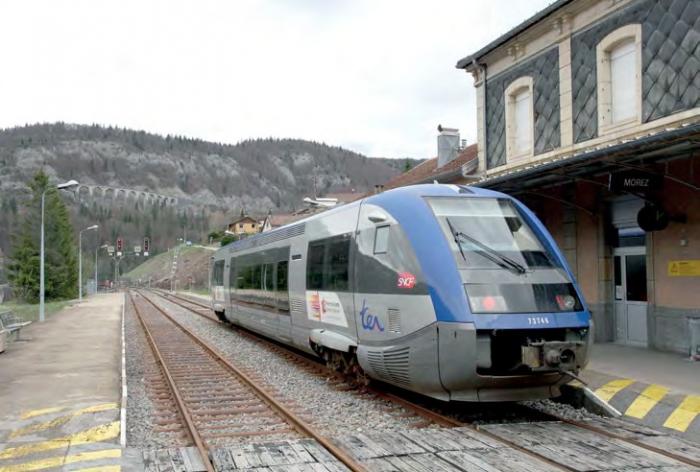 Pilot for tendering? SNCF single-car DMU X73746 at Morez on 15 April 2016 working a Ligne des Hirondelles service. Some of the spectacular viaducts used by the train to get to Morez can be seen in the background. Keith Fender