DRS has ordered 10 of the class from Stadler, which built them at its Valencia factory in Spain. They have been financed by Beacon Rail Leasing, and are set to be used chiefly on intermodal workings on the WCML.

The ‘88’ is a variant on the Class 68 diesel design, also built by Stadler and delivered to DRS, but, unlike the ‘68’, the ‘88’ can operate under both AC electric power from overhead wires and diesel through a 950hp Caterpillar C27 diesel power pack. Power output is 4,000kW in electric mode and 708kW in diesel. The loco can transition from electric to diesel power on the move, dropping the pantograph without losing speed. The launch working included No 68022 Resolution on the rear as insurance in case of any issues with the ‘88’. 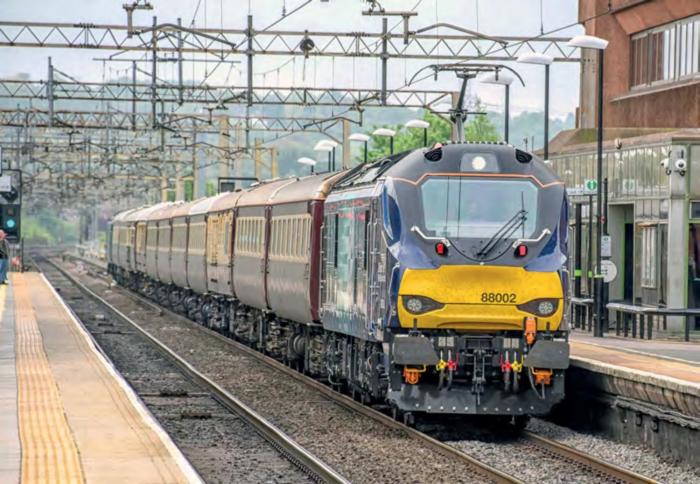 First new electric locomotives in the UK for over quarter of a century: Direct Rail Services’ new Class 88 dual mode locomotive No 88002 Prometheus races through Watford Junction at the head of the 09.32 1Z88 Euston - Carlisle ‘Northern Belle’ VIP Launch special on 9 May 2017. Graham Nuttall