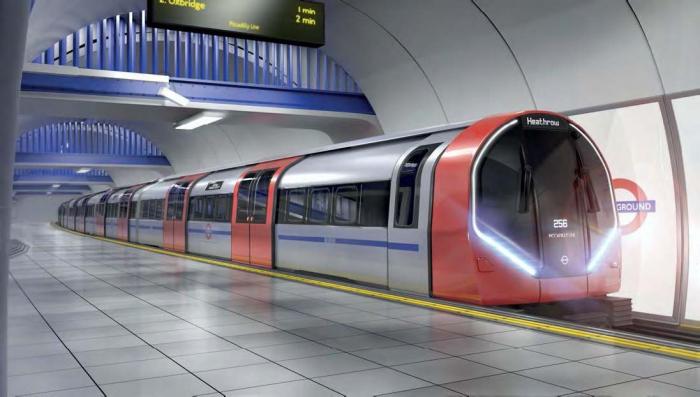 Contract on again: computer rendering of the new stock for the Piccadilly Line.
Courtesy TfL

In June TfL announced it intended to award a £1.5 billion contract to Siemens to build 94 new trains for the Piccadilly Line. Part of the Deep Tube Upgrade Programme, TfL expects the same manufacturer also to build new leets for the Bakerloo, Central and Waterloo & City Lines. The irst of the new Inspiro trains for the Piccadilly Line is planned to be delivered in August 2023, with the full leet in service by 2026, allowing a frequency increase to 27 trains per hour (tph).

However, three unsuccessful bidders (Bombardier and Hitachi, who submitted a joint bid, and Alstom) started High Court proceedings in relation to the award. This prevented London Underground from entering into contracts with Siemens pending a hearing to consider LU’s application to lift the suspension.

Nigel Holness, Managing Director of London Underground, said: ‘The Deep Tube Upgrade Programme will replace the trains in our leet that are most in need of modernisation, some of which were built in the 1970s. This will signiicantly improve the experience for millions of our customers travelling on our network. We are pleased with the decision, which will enable us to award the contract to Siemens Mobility Ltd and ensure we can begin to deliver a new leet of Piccadilly Line trains by 2023.’

The award to Siemens is expected to facilitate investment by the manufacturer in a new factory at Goole, East Yorkshire. TfL said it will work with Siemens to maximise the number of trains being built at the facility, which will employ up to 700 people in engineering and manufacturing roles plus an additional 250 created during the construction phase. Twenty-two UK suppliers have been identiied to potentially work with Siemens on the build of the new trains.

Each new Piccadilly Line train will be six metres longer than the existing trains, and will include walk-through, air-conditioned carriages. TfL promises improved accessibility, a design to optimise the space constraints in the deep tube tunnels and in-train information systems. The contract also includes whole-life technical support from the manufacturer.

The new signalling system will be designed to allow operation of up to 36tph, for which a further eight trains would be required, creating a maximum leet size of 109 trains. A separate procurement process for the signalling and control system for the Deep Tube lines is underway, with a view to awarding this contract by mid-2020; shortlisted bidders for this contract are Alstom, Siemens and Thales.