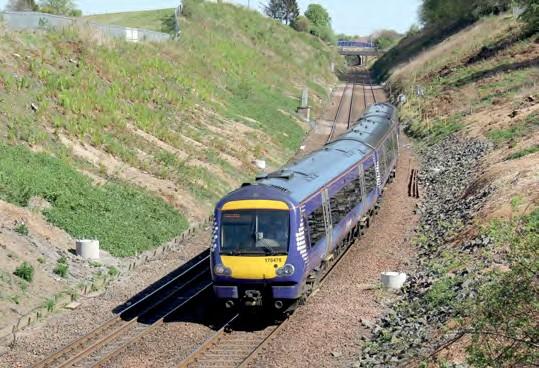 Wires awaited: unit No 170478 is running downgrade between Polmont and Falkirk Grahamston with the 14.33 Edinburgh Waverley to Dunblane service on 3 May 2017. The lineside vegetation has been cleared and the mast bases can be seen in situ for the forthcoming electrification of this line as part of EGIP.
Ian Lothian

THE FIRST electric passenger services between Edinburgh and Glasgow via Falkirk are now expected to run on 2 October, Scottish Transport Minister Humza Yousaf has confirmed.

Writing to the Scottish Parliament’s Rural Economy and Connectivity Committee, Mr Yousaf confirmed advice from Network Rail that replacement of a failed safety critical electrification component and ‘a number of other critical works’ would be required prior to the start of electric services. The component concerned is understood to relate to track circuit immunisation. Energisation of the overhead wires is now planned for 2 September; the impact on the cost of the programme has not been confirmed.

The wiring, part of the Edinburgh Glasgow Improvement Programme (EGIP), was originally due to be completed by December 2016, when Class 380 EMUs were to begin operating electric services. However, it was confirmed in summer 2016 that the project was running around seven months late, chiefly due to compliance issues with standards for electrical clearances. In late May, the minister confirmed there would be a further delay to electric services.

Mr Yousaf said the ‘delayed availability of the route’ would have a knock-on impact on the testing, approvals and driver training programme for the new Hitachi-built Class 385 EMUs. Initial electric workings will use Class 380s, and it is thought the ‘385s’ will now enter service in December. Mr Yousaf has highlighted Network Rail’s ‘critical role’ in the rolling stock commissioning programme, and says he is pushing NR to maintain the December 2017 milestone of a full electric service on the Edinburgh to Glasgow route using Class 385s. He added NR has made ‘a 20% increase in infrastructure delivery resource’, and that this coupled with increased daily scrutiny from compliance managers is the basis on which Network Rail feels able ‘to offer greater confidence that the revised entry into service date is robust’. He also highlighted that completion of electrification to Stirling, Dunblane and Alloa by December 2018 is critical to delivering a 42-minute journey time between Edinburgh and Glasgow by that date.

In an earlier discussion with the committee, Mr Yousaf stated his aspiration for devolution ‘at least of the infrastructure projects and preferably of the timetable elements’ of NR, both of which are currently based at the company’s Milton Keynes headquarters.