EGIP WIRES TARGET FOR MAY

THE SCOTRAIL Alliance is aiming to deliver electrification of the Edinburgh to Glasgow route via Falkirk in time for the timetable change in May, according to alliance managing director Phil Verster.

Edinburgh Glasgow Improvement Programme (EGIP) was originally due to be completed by December 2016, but it was announced last summer that this would be delayed by seven months to July 2017, coupled with an increase in the scheme’s £742 million cost. However, Mr Verster told the Scottish Parliament’s Rural Economy and Connectivity Committee that ‘we are working hard to get to the stage at which we can benefit our customers significantly by introducing electric rolling stock on Edinburgh to Glasgow from the May timetable change’.

Electric services will initially be operated by Class 380 EMUs, but these will be replaced from the autumn by new Hitachi Class 385 EMUs, the first of which has begun testing on the ScotRail network. Mr Verster reported that this is ‘going superbly well’, and the introduction of the first unit into passenger service is on target for September. ScotRail plans that by the end of 2017 all services on the Edinburgh to Glasgow via Falkirk route will be operated by ‘385s’. The complete fleet comprises 24x4-car and 46x3-car units, with an option for a further 10units.

The ability to run eight-car trains between Edinburgh and Glasgow will be achieved following completion of works at Glasgow Queen Street station, which includes platform lengthening. Mr Verster said there is a significant risk to these works associated with an order under the Transport and Works (Scotland) Act, for which a report back was expected in January or February. He added that ‘the main programme for Queen Street has not yet kicked off to the extent that we wanted it to have kicked off by the back end of last year. That will have consequences for our delivery of key outputs 3 and 4 in EGIP. However, we cannot size those impacts yet’.

Mr Verster was asked about progress with electrification to Stirling, Dunblane and Alloa, which is the next stage of wiring works in the central belt. While many structures on the route have already been adapted for electrification, Mr Verster told the committee that three key structures had been identified as requiring further adjustment in line with revised standards, of which one, a listed footbridge at Stirling station, would be particularly challenging and would require ‘an innovative solution’. Mr Verster added that this has the potential to impact on the scheme’s cost.

EGIP electrification is being delivered through an alliancing contract between Network Rail, Costain and Morgan Sindall, and Mr Verster told the committee that he believes the best value and best delivery is achieved through an alliance, hence the continuation of this delivery mechanism for the Stirling, Dunblane and Alloa work. He highlighted that ‘the sense check on the issue for us is that, when a comparison is made between the unit rates of electrification projects across Network Rail, ours is the lowest’. 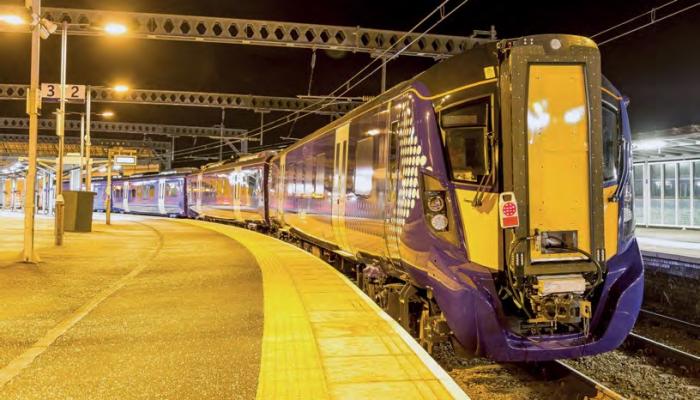 ‘385’ on test: in the early hours of the morning of 26 January 2017, unit No 385102 undertook trial runs between Gourock and Langbank. Here it is stabled at platform 2 at Gourock prior to the tests. Jonathan McGurk