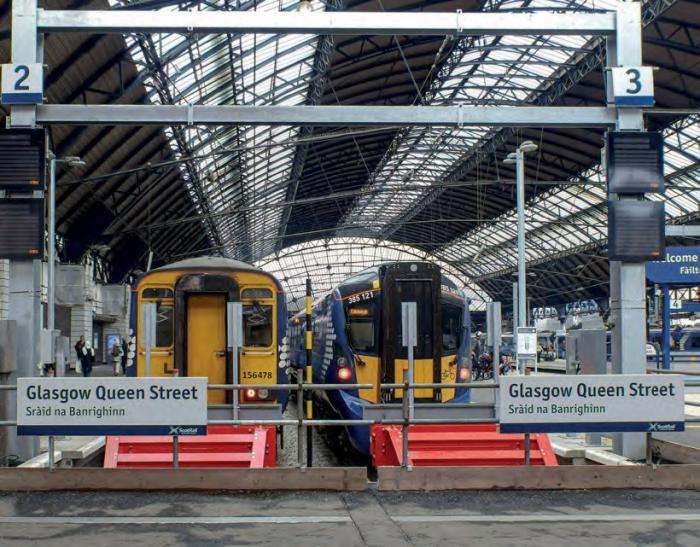 Lengthened platforms: newly-installed overhead line at the west end of platforms 2 and 3 at Queen Street on 30 July 2019. The Class 156 (left) was bound for Mallaig and the Class 385 was about to leave for Edinburgh. Ann Glen 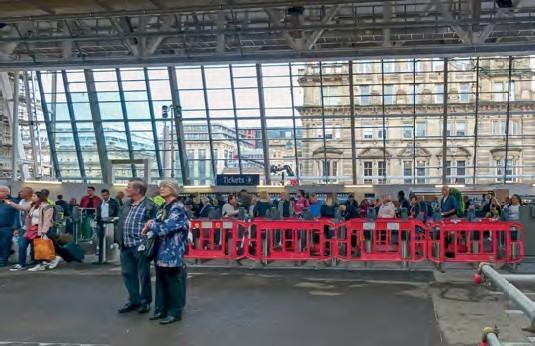 Airy feel: the view through the glazed façade to George Square and West George Street as bemused passengers try out the new arrangements at the concourse end of Queen Street on 30 July 2019. Ann Glen

ON 29 JULY ScotRail began operating Class 385 EMUs on the Edinburgh to Glasgow via Falkirk route in eight-car formations, following the completion of the first phase of platform extension work at Glasgow Queen Street station.

Since their introduction in July 2018 the Hitachi-built units have operated in seven-car consists. In late July, Story Contracting completed a four-week project to extend platforms 2 and 3 at Queen Street by 26 metres, accommodating the longer formations. A further phase of platform work will take place between mid-September and mid-October to similarly extend platforms 4 and 5.

Initially ScotRail has rostered an eight-car set on two of the diagrams on the E&G route, departing both Queen Street and Edinburgh Waverley on the hour. The operator ordered 46x3-car and 24x4-car ‘385s’ from Hitachi, with over 60 of the 70 units now in passenger service.

Network Rail’s platform extension project has increased the floor space within the concourse at Queen Street, joining part of the new concourse onto George Square to the existing one. July also saw Network Rail begin the installation of 310 glass panes to the façade on the West George Street side of the station. The full redevelopment at Queen Street is due to be completed in spring 2020.

The £27 million project, which saw the line closed from 20 July to 4 August, included upgrades to track, cabling, overhead lines and signalling. During the closure trains were diverted, with Virgin Trains operating an hourly Anglo-Scottish service between London Euston and Glasgow Central via Manchester Piccadilly.

Other engineering work completed during the closure included upgrading 4km of track and 2km of drainage through nearby Sutton Tunnel and removing a track crossing near Runcorn East station. NR says carrying out these associated projects at the same time saved a further 13-day closure of the WCML.

NETWORK RAIL has award three railway systems alliances contracts for track and associated works over the next 10 years.

The scope of the work covers site investigation, survey, design, planning and installation of track works. Three lots have been awarded as follows:

The three lots together have an estimated value of £5 billion, including both renewal works and enhancement schemes.

Transitions are envisaged in the Stalybridge and Cottingley areas, with control from the relevant Rail Operating Centre. Interlocking and trackside equipment would come from other suppliers, with the exception of balises and associated signage which will be provided by the ETCS contractor. The contract also covers any required upgrade of GSM-R infrastructure.

The winning contractor will also maintain the new system for around 30 years, with the contract potentially including Automatic Train Operation (ATO). NR envisages inviting four candidates to tender for the contract, which has a value of between £180.5 and £210.5 million.

NR has already appointed a West of Leeds alliance, comprising BAM Nuttall, Amey and Ove Arup and Partners, which will deliver a signalling solution that is Digital Railway ready on the section between Stalybridge and Cottingley. A ‘seamless interface’ is envisaged in work between the alliance and the winning ETCS contractor. 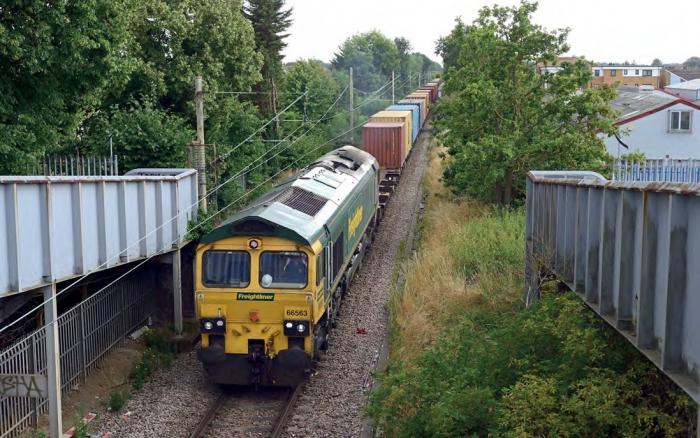 WORK ON the Barking Riverside extension of the London Overground network caused c2c to operate a restricted timetable between 20 July and 4 August.

The up line was closed through Ripple Lane, allowing Transport for London’s contractors to carry out work to build the junction for the new branch to Barking Riverside. With restricted capacity, c2c instituted a temporary timetable with all country-bound services towards Grays running via Rainham and all London-bound services via Ockendon; the single track on the Upminster to Grays line via Ockendon precluded the running of a two-way service on this route. Services were supplemented by rail replacement buses.c2c says this is the only fortnight-long blockade of its type currently planned as part of the programme, but that further works would take place at weekends and at Christmas. A joint venture of Morgan Sindall and VolkerFitzpatrick is building the 4.5km extension to the Barking Riverside development, which will support up to 10,800 new homes.

Passenger services are due to begin in late 2021 and will comprise an extension of the existing quarterhourly Gospel Oak to Barking service.

STORY CONTRACTING has been awarded the contract to deliver the new station at Horden, on the Durham Coast line.

Story will deliver two new 100-metre platforms along with step-free access via a footbridge and ramps. The scope will also include associated piling, signalling, track realignment, lighting, customer information and public address systems, CCTV and platform furniture. The contract is valued at over £4 million.

The £10.55 million station near Peterlee is planned to open in spring 2020. Funding is from Durham County Council along with £4.4 million from the Department for Transport’s New Stations Fund and a grant from the North East Local Enterprise Partnership. 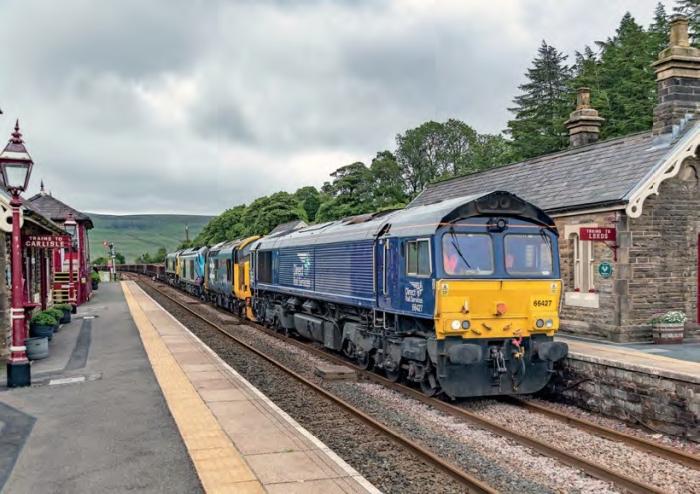