In mid-June The Independent newspaper reported that German operator Deutsche Bahn had finally given up on the idea of ICE services from London to Germany via Brussels. In response to enquiries DB told Modern Railways ICE direct services to London ‘will not be on the agenda in the foreseeable future’, adding that the ‘…decisive factors (behind DB’s decision) are technical and economic reasons: the ICE3 Class 407 train is not yet approved for used in Belgium and the economic environment has changed significantly (since DB originally proposed through services)…as a result of price competition with low-cost airlines’.

It has long been apparent that the requirements imposed by Channel Tunnel security arrangements and by the immigration authorities in the UK had caused DB to delay its plans. The Siemens-built Velaro-D Class 407 trains remain unapproved in Belgium despite being in daily service between Germany and France. Sources tell Modern Railways the approval process has been taken over by DB itself rather than Siemens, so whilst DB is correct to say the trains do not yet have approval in Belgium, this is something it has control over. Whilst the earlier ICE3M Class 406 train has visited London and undergone tests in the Channel Tunnel, the newer Class 407 has not (although mechanically the new Eurostar Class 374 trains are essentially two DB Class 407s coupled back-to-back).

In July Getlink (the new name for Eurotunnel Group) revealed it had commissioned work from consulting firm Roland Berger looking at the scope for ‘low cost’ competition on international rail routes through the Channel Tunnel. This news was published in some UK newspapers, saying such services could ‘soon’ start operation. The Berger report suggests trains modelled on the French ‘OuiGo’ model using less busy termini (in the London to Paris case Stratford International and Paris Charles de Gaulle airport) plus possibly non-high-speed sections of lines (which have lower access charges) could make such services viable, with a three-hour Stratford to Paris CDG timing suggested.

Getlink says it will assist new entrants in much the same way that small regional airports fund service start-ups by budget airlines, as more trains will drive up its revenues (only 58% of existing capacity in the Channel Tunnel is used). However, it is unclear who such new entrants might be. The only obvious rail operator who has rolling stock suitable for use in the Channel Tunnel is Eurostar, which is majority owned by French operator SNCF. It is entirely possible Eurostar might set up a ‘low cost’ brand to operate on the same route; Paris – Benelux/Germany operator Thalys, also majority SNCF-owned, has established just such a subsidiary branded as ‘Izy’ operating Paris to Brussels services (using secondhand TGV sets) via a route that is part high-speed LGV and part conventional network to reduce track access charges.

There are suitable trains that could be used by new entrants, such as the older Class 373 Eurostar sets which are now mostly being withdrawn, but it seems highly unlikely these will be released to an operator outside the SNCF group and to date most withdrawn trains have been sent for scrapping in the UK rather than being stored in continental Europe.

Russian President Vladimir Putin opened the new 18.1km combined road and rail bridge over the Kerch Strait (which connects the Black Sea to the Sea of Azov) on 15 May. Named ‘The Crimean Bridge’ following an online poll in Russia and paid for by the Russian government, the bridge connects Russia with the Crimean peninsula, which was annexed by Russia from the Ukraine in a military takeover in 2014.

The new bridge cost a reported £2.7 billion and is now the longest bridge in both Russia and Europe. It actually comprises two parallel bridges, one with a four-lane dual carriageway road, the other – not yet completely finished – with a double-track railway. Whilst the road bridge opened in May 2018, rail services will not begin until 2019, enabling through passenger and freight services from Russian cities; these have not been possible since the annexation as Ukraine sealed the northern borders of Crimea to rail traffic. 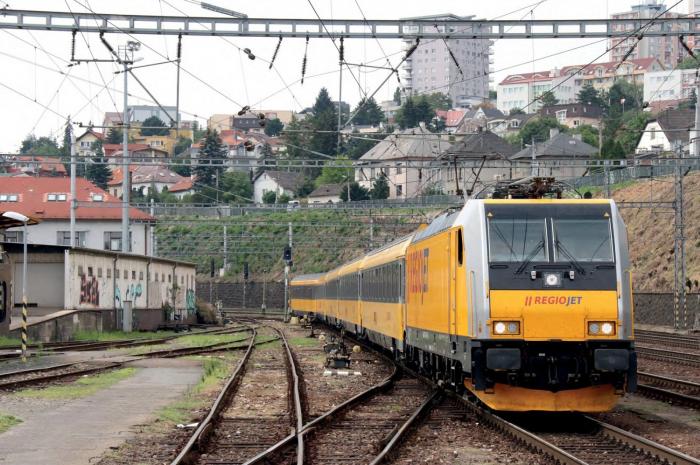 First of the Regiojet Traxx: loco No 386201 arrives in the Slovak capital Bratislava on 6 July 2018 with the 11.21 service from Prague. Regiojet expanded its services to include the Prague to Brno/Bratislava route in December 2016, with additional services operating from Prague – Brno – Vienna from December 2017.
Keith Fender

The bridge is not the first road or rail bridge over the strait, but it is the first permanent one – during World War Two both the German and Soviet armies built temporary road and rail bridges over the Strait at its narrowest point, although only the Soviet-built one was finished (using material left behind by the retreating Germans). The Ukrainian government has described the construction of the new bridge as a violation of international law, a position supported by most western governments including the UK.