If the industry is serious about a ‘root and branch’ fares review, it might be helpful to know what is being sold and how much it costs 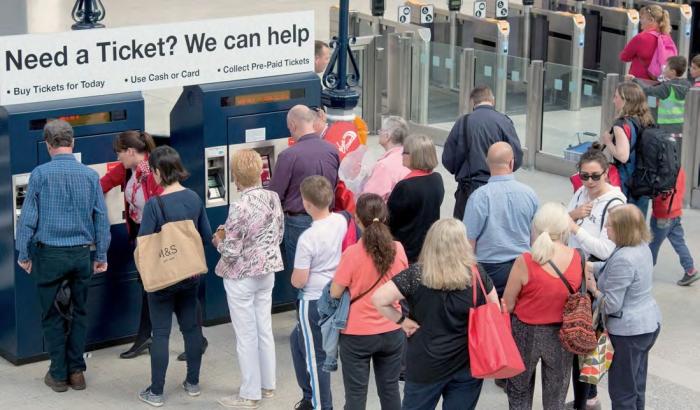 This column has always steered clear of the minefield that is rail fares. There are people who have dedicated their working lives to the subject and even they admit it is complex. So what chance would I have?

On 8 May, the Rail Delivery Group and Transport Focus launched a public consultation on what it calls a ‘root and branch reform of well-meaning but outdated fares regulation’. The aim is to develop proposals to reform fares and regulations ‘to make it easier for passengers to get the right ticket, enhancing trust in the system and supporting continued investment to improve the service’.

As RDG Chief Executive Paul Plummer pointed out, ‘unpicking the regulation of a £10 billion-a-year fares system that underpins such a vital public service means there are no quick-and-easy solutions. The change that’s needed won’t be easy and the industry doesn’t have all the answers, which is why we want to hear views from passengers, communities and businesses in all parts of the country’.

But this suggests that the review is about changing the interface between the passenger’s credit card and the online website or ticket vending machine. In effect, simplifying what is on offer and how it is presented, while not reducing revenue and, ideally, increasing it.

This is not really my field. But it occurred to me that if you really are into ‘root ‘n’ branch’, and who isn’t this month, you might go back to first principles and ask the question facing all businesses: ‘what am I selling and what does it cost to make?’

Conventional passenger statistics are not that helpful when it comes to pricing the product. ‘Passenger miles’ gives an indication of the volume of traffic, as does ‘Passenger journeys’. The Department for Transport and the Office of Rail and Road both publish statistics of subsidy per passenger mile, taking in both direct subsidies/premia and indirect subsidies in the form of Network Rail’s Direct Grant.

However, the airline industry employs a measure called ‘available seat miles’. This is a useful concept in an industry where the cost of a seat mile is heavily dependent on the amount of fuel you use overcoming gravity to keep that seat in the air at FL400. Even not painting your aircraft saves weight that can be translated into more seats, longer range or lower costs.

Clearly, the big difference between trains and planes is that the trains have to pay infrastructure charges throughout the journey instead of landing fees at each end. But there ought to be value in knowing what a passenger train available seat mile costs.

Table 3 summarises the ‘per available seat’ costs for four franchised plus two open access operators. The operators were chosen on the basis of running small fleets on broadly homogenous services.

Where fleets, like the CrossCountry Class 170 diesel multiple-units, have two formations and differing interior layouts, I have calculated the ‘average’ unit. However, as usual, the aim is to be ‘approximately’ correct. Also, I have not differentiated between Standard and First Class seats. A seat is a seat in this analysis.

Note that ‘direct costs’ cover staff, fuel and rolling stock. Total annual infrastructure costs combine the train operators’ fixed and variable Track Access Charges (TAC) plus each operator’s proportion of the Direct Grant paid to Network Rail. This is calculated by both the Department for Transport and the Office of Rail and Road in their data. For example, in the case of TransPennine Express, the TAC come to £92 million and the share of the direct grant £124 million.

Of course, it is not as simple as that. CrossCountry, for example, highlights an inherent difficulty with any analysis of passenger rail operators’ costs.

In 2015-16 the company paid a premium of £200 million to DfT but received £120 million back in revenue support. No wonder that those in the ‘normal’ world struggled to comprehend the finances of, say, Virgin Trains East Coast. Which is why I have tried to keep this analysis both simple and simplistic.

Before starting this analysis I had no idea what might emerge. As Table 3 shows, the direct costs per available seat mile are surprisingly homogenous across the three long-distance franchised train operators.

While the two open access operators are roughly twice as expensive on direct costs, I suspect this is partly the result of running a small number of small trains. This means the costs have to be spread across a smaller number of available seat miles. A form of diseconomy of scale.

With the exception of c2c, the infrastructure costs per available seat mile for the franchised operators are similarly homogenous. In the case of the open access operators I have calculated their Variable Track Access Charges using the official Network Rail vehicle ‘price list’.

I should repeat a warning here. This analysis is focused on total cost, which includes each operator’s share of Network Rail’s Direct Grant.

If we exclude the Direct Grant from the calculation, the cost per available seat mile for the franchised train operating companies (TOCs) is similar to that of the open access operators. On the East Coast, the LNER cost is 9.5p versus 9.8p and 8.9p for Hull Trains and Grand Central respectively.

However, the Direct Grant allowance must be included because it reflects part of the cost of the ‘product’. And for the three ‘main line’ TOCs the cost per available seat mile is around 15p.

On this basis, a seat from King’s Cross to Leeds or York ‘costs’ around £28 to provide. If you exclude the Direct Grant component, the ‘cost’ falls to £18. On the LNER website the cheapest advertised fare for travel on 9 October this year was £17.

As ever, we should remember that correlation is not causation. And on the same date the advance fare for London-Edinburgh was the equivalent of 7p per seat mile. But here I am moving into the territory of the fares specialists and had better stop.

Clearly, this analysis has its limitations. For example, with commuter services you are not selling a seat mile, but mass transportation, effectively self-loading wetware-enabled bulk freight. In this case the ‘product’ could be regarded as passenger miles of usable floor area.

In the case of c2c, the total cost per passenger mile is roughly equal to the revenue per passenger mile. In reality, because of the direct grant factor, in 2016-17 the TOC paid a small premium (£46 million). The Direct Grant equated to a subsidy of £60 million which, within the margin of error in these back-of-an-envelope calculations, can be considered as breaking even.

Overall, it seems that the total cost of production generates per seat mile figures in line with cheap advance fares in the real world. In the commercial transport world, cost of production is also only the start of setting the selling price. For a start there is the load factor – the proportion of seats taken up across the day.

My seat miles analysis gives load factors of 55% for LNER and 50% for TPE. Thus to recover the cost of production the revenue per passenger mile should be roughly double the cost per available seat mile. Then because First Class takes up more room per seat, the actual cost of production is more, say 30%.

But, of course, rail travel is not subject to the practices of the commercial transport world. According to the financials for 2017-18 just published by ORR, the franchised TOCs paid DfT net premia of £400 million. However, their share of Network Rail’s Direct Grant totalled roughly £4 billion.

Hence the need for TOCs to squeeze as much revenue out of their passenger traffic and charge what the market will bear. Thus a walk-on off-peak single from London to Leeds is £127 compared with the total ‘cost of production’ of £28, including covering the ‘invisible’ subsidy of the Direct Grant. This is in line with the Government’s aim of transferring the cost of passenger rail from the taxpayer to the farepayer. So is this analysis of cost per available seat mile irrelevant to the fares review? Not entirely – at least, I would hope not.

It does set a floor on advance and promotional prices, below which the TOC is actually losing money. But other than that, the fares review will have as its starting point current fares, which are quite arbitrary and, like Topsy, have just growed, either on the basis of what the market will bear or, with regulated fares, by Government-determined annual percentages. 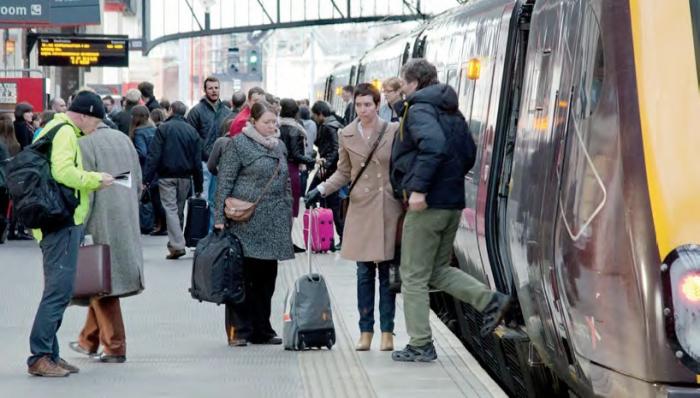 Did we pay a fair amount? Passengers at Stoke-on-Trent, 14 March 2013. Tony Miles