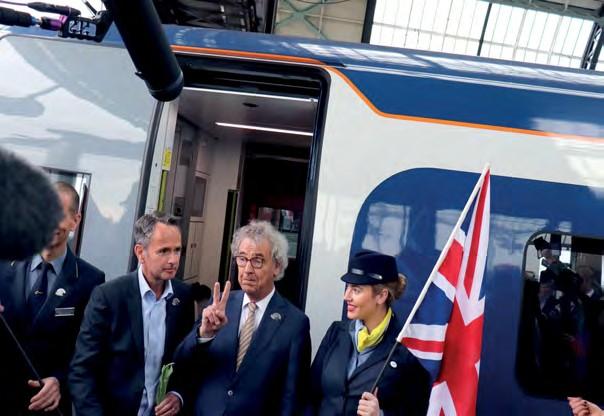 Two direct services a day: Roger Van Boxtel, the CEO of Netherlands Railways, counts them on his fingers. Alongside him at Amsterdam Centraal on launch day, 4 April 2018, is Mike Cooper, the new Eurostar CEO.
Philip Sherratt

EUROSTAR’S SERVICE from London to Rotterdam and Amsterdam was officially launched on 4 April 2018, with the first direct train carrying fare-paying passengers departing from St Pancras at 08.31. A total of 753 passengers were on-board for the first service.

The operator will run two direct services per day leaving London (one on a Saturday and Sunday), completing the journey to Rotterdam in 3hr 1min and Amsterdam in 3hr 41min. However, the return journey will require a change of train at Brussels as agreement has not yet been reached to carry out passport and security screening in Amsterdam.

The UK and Dutch Governments have committed to put the necessary agreement in place by the end of 2019, although it is hoped it could be reached sooner. In the meantime, the fastest return journey time involving a connection at Brussels is 4hr 40min, using Thalys services for the Amsterdam to Brussels leg. Eurostar is offering fares starting at £35 single for the journey to Amsterdam. All Amsterdam services will use the operator’s Siemens-built Class 374 e320 trains, which have the necessary signalling compatibility to operate through the Netherlands.