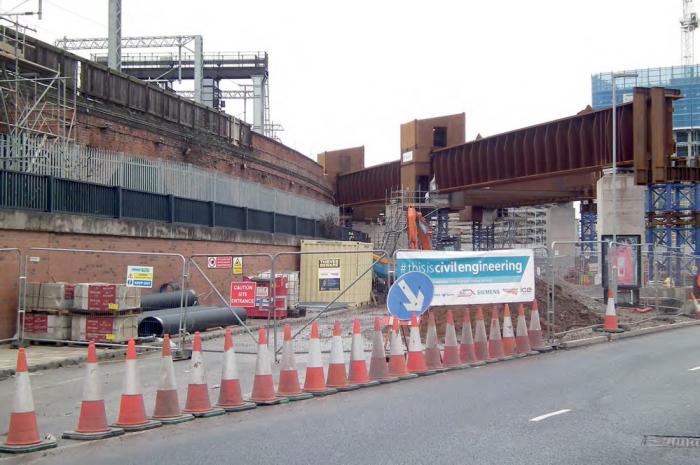 Coming on: view looking north-east along Trinity Way, Salford, on 29 January 2017, showing the location where the viaduct under construction for the Ordsall Chord diverges from the existing Manchester Victoria to Liverpool route. Mike Haddon

NORTHERN PLANS that the first passenger services to use the Ordsall Chord in Manchester will start operating in December 2017.

Many of Northern’s changes in the December 2017 timetable are taking advantage of the electrification of the route between Manchester and Preston via Bolton, enabling the introduction of electric trains to provide faster journey times and higher capacity and a cascade of diesel trains to enhance services on other routes. This project, originally due for completion in December 2016, is being delivered one year later than originally planned.

Northern had originally planned more substantial changes to its timetable in December 2017, but delays to other elements of the infrastructure upgrade plan in the north west of England, combined with delays to planned rolling stock cascades, have caused these to be put back. The operator says more substantial changes will follow in May 2018, resulting from ‘capacity improvements between Manchester Victoria and Stalybridge together with the arrival of more rolling stock’. The December 2018 timetable will see the phased introduction of Northern’s new CAF-built DMUs and EMUs, with the inter-regional Northern Connect network launched a year after that.

Electrification between Preston and Blackpool North is due for completion by May 2018. A two-phase blockade will take place to enable this work to be completed – from 11 November 2017 until 26 January 2018 there will be no trains to either Blackpool North or Blackpool South, with services to Blackpool North not restored until 26 March. Initially only diesel services will operate, with through services to Liverpool and Manchester restored at the May 2018 timetable change.

Other changes planned for December this year include introducing a second hourly service between Sheffield and Retford, doubling the frequency and enabling Sheffield to Lincoln services to run fast to Worksop and journey times to be cut by around 10 minutes.

Also planned is the provision of two additional hourly services between Leeds and Harrogate calling only at Horsforth with journey times of around 30 minutes, creating a four trains per hour frequency. On the Darlington to Bishop Auckland branch, services will be boosted from two-hourly to hourly, with the broad pattern of service operating seven days per week. Sunday services are planned to be improved on a number of routes, with extended hours of operation and/or increased frequencies.

Northern is inviting stakeholder suggestions regarding provision of services on Boxing Day. It says that traditionally this has not been viable due to the cost of route opening, chiefly surrounding signal boxes, but that as Network Rail signalling control becomes centralised there may be new opportunities.

Industry sources have confirmed that whilst it is the intention of Network Rail for the complete route between Manchester Piccadilly and Manchester Victoria via the Ordsall Chord to be bi-directional in order to improve operational flexibility and resilience in the event of incidents such as train failures, one section will not initially be signalled for bi-directional working.

The up (northern) line from Deansgate to Manchester Oxford Road is currently not signalled for bi-directional operation, with sources indicating to Modern Railways that there was no business case for this when the situation can be resolved more economically by combining it with the remodelling of Oxford Road station in the next few years. In the meantime, all traffic towards Ordsall from Oxford Road must use the down line, including moves from platforms 3 to 5, which will continue to cross to the down line via the existing crossovers. They will be able to cross to the up line via the existing crossover on the eastern approach to Deansgate station, which is now signalled for bi-directional running. Tony Miles