90 NEW SUBURBAN TRAINS AND REFURBISHED ‘442s’ FOR THE PORTSMOUTH LINE

A JOINT venture between FirstGroup and MTR will operate the South Western franchise for seven years from August 2017, taking over from Stagecoach.

A £1.2 billion investment is planned over the course of the franchise, including the introduction of 750 new carriages for the Windsor, Reading and London suburban routes by December 2020. Reintroduction of Class 442s on the Portsmouth line, faster journey times to many destinations and more than 400 extra Sunday trains are also promised. FirstGroup holds the majority 70% stake in the joint venture, which was up against Stagecoach in a competition where only two bidders were shortlisted.

The 750 new carriages will comprise 90 trains, forming what is described as a ‘metro-style service’ on suburban routes. FirstGroup’s plans for a ‘homogenous’ fleet will see the current Class 455, 456 and 458/5 EMUs and the new Class 707s all replaced. The new fleet, which will offer free Wi-Fi, at-seat charging points, air conditioning and toilets, is to provide over 46% more capacity for passengers than the current trains on these routes. Service entry is expected to begin in autumn 2019 and be completed by the end of 2020, after which a timetable change will take advantage of the fleet’s introduction.

Eighteen Class 442 EMUs are to be introduced for Portsmouth fast services by December 2018. The 24-strong fleet, owned by Angel Trains, has been released by Govia Thameslink Railway from Gatwick Express duties, and three-quarters of the fleet will be refurbished to ‘as new’ condition and equipped with new traction motors. First and MTR promise ‘2+2’ seating on all Portsmouth fast trains. Four trains per hour will provided between London and Portsmouth, with 35 additional services on Mondays to Saturdays and more fast services on Sunday afternoons. Alliance Rail Holdings has promoted a possible open access service between Waterloo and Southampton, also using ‘442s’, which would be subject to approval from the Office of Rail and Road.

Elsewhere, existing Class 444 and Class 450 units, plus the Class 158 and 159 DMUs for the West of England line, will be refreshed with plug sockets and provision of free infotainment, which will be available across the entire mainland fleet by December 2020, and improved Wi-Fi provision is promised. Real-time information will see live updates provided to passenger information screens on board all trains.

The new franchise promises 22,000 extra morning peak seats into Waterloo and 30,000 extra evening peak seats. A new timetable in December 2018 will see journey times cut, with Weymouth to London falling by up to 14 minutes, Southampton to London by up to eight minutes, Salisbury to London by 11 minutes and Portsmouth to London by five minutes. A direct service will link Portsmouth, Southampton and Weymouth, while there will be a second hourly semi-fast service between Portsmouth and Southampton offering a total of 29 additional services between the cities on Mondays to Saturdays. Thirty-six new direct services between Guildford and Farnham on weekdays are also promised.

Closer to the capital, both Reading and Windsor will see a frequency boost from two to four trains per hour to London, while a major improvement to Sunday timetables will see almost 400 more services operate, including more West of England trains. Late evening frequency will also be improved with earlier first trains and later last trains on many routes. The December 2018 timetable will take advantage of increased capacity and longer platforms at London Waterloo, part of the plan devised by current franchisee South West Trains in conjunction with Network Rail and the Department for Transport. 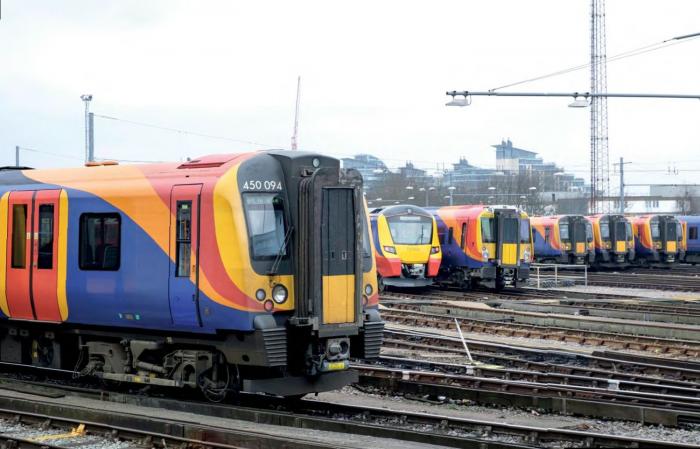 A £90 million station investment programme will take place, including refurbishment at Southampton Central with a new-look entrance, improved retail and better facilities. At least 1,500 new car parking spaces are to be provided along with 60 electric vehicle charging points at stations. First and MTR say they will work with stakeholders to progress plans for new stations such as Park Barn, Merrow and Wilton Parkway.

Mobile phone barcode ticketing is to be provided, along with implementation of a smartcard scheme with pay-as-you-go functionality and flexible season products. Delay repay will be introduced for the first time on the South Western franchise for delays of more than 15 minutes, with automatic compensation for season and advance ticket holders, while a new customer app will be the primary source of travel advice for passengers. A £2.6 million annual fund for community projects will be launched from April 2020, while the biggest rail operator apprenticeship scheme in Britain will create more than 100 apprenticeships each year.

DfT says the new franchise will see closer partnership between track and train in line with the ambitions set out by Transport Secretary Chris Grayling. The operator is to work ‘even closer with Network Rail’ to ‘drive higher performance, achieve greater productivity in operations, improve maintenance delivery and infrastructure renewals, and support infrastructure improvement delivery’.

For the Island line, no replacement rolling stock is promised for the nearly 80-year-old ex-tube trains, but First and MTR say they will engage with the Isle of Wight community to develop plans to secure a more sustainable service, with a proposal then submitted to Government with Island support. Service improvements include an earlier first train from Shanklin and better mainland connections via ferry and hovercraft.

The core franchise period will be seven years, with an extension of up to 11 railway periods at DfT’s discretion. During this time, First and MTR promise to pay Government £2.6 billion (real net present value at 2017/18 prices) in premium payments. The franchise terms include GDP and Central London Employment revenue protection mechanisms to mitigate the financial impact of economic factors outside the control of the franchise operator, while a profit sharing agreement will see profits in excess of pre-specified thresholds paid to DfT. Approximately £80 million of investment will be directly funded by the operator, and passenger revenues are expected to increase thanks to the additional capacity created.

First and MTR will take over the franchise from Stagecoach on 20 August, during the middle of a major blockade at London Waterloo to carry out platform extension work and remodelling of the station throat. Stagecoach has operated the franchise as South West Trains since 1996, and the Department for Transport originally intended a further direct award contract to run through to 2019, but DfT and Stagecoach failed to agree financial terms.