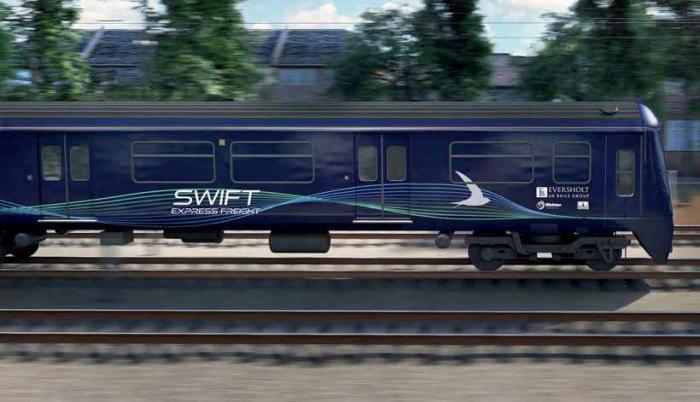 ACLASS 321 EMU will be converted into a parcels unit in a project developed by Eversholt Rail.

Called the ‘Swift’ Express Freight train, Eversholt has developed the concept in partnership with Ricardo. A trial conversion on No 321334 was due to start in April at Wabtec’s Doncaster facility, with the unit to be launched for trials in June. The scope of works includes removal of passenger features, installation of new flooring and equipment to retain containers and a new livery.

Eversholt says the unit will be capable of 100mph and able to hold up to 12 tonnes of freight per vehicle.

The Eversholt-owned Class 321 fleet is being withdrawn from service with Greater Anglia as Class 720 EMUs are introduced. Some units are going for scrap, while others are destined for conversion to Class 600 hydrogen multiple-units as part of Eversholt and Alstom’s Breeze programme.

To secure capacity in the medium-term, SWR is to retain 28 Class 458s, which will be leased from Porterbrook until 2027. A £25 million contract has been signed between Porterbrook and Alstom which will see these reformed as four-car sets and refurbished with an interior more suitable for longer-distance duties on the Portsmouth route.