FREIGHTLINER MARKED the acquisition of 13 Class 90 locomotives released from Greater Anglia with the repaint and naming of No 90014 in recognition of the efforts of key workers during the Covid-19 pandemic. The name was selected from an internal competition, with Over the Rainbow having been proposed by Freightliner Train Planner David Clay who unveiled the nameplate and accompanying ‘key workers’ rainbow plaque.

Nos 90003-015 have been purchased from Porterbrook and are being modified and refurbished ahead of their use on intermodal trains. The naming also recognised that the Freightliner Class 90 fleet, now 23-strong, will play a vital role in decarbonising freight movements, with the ability to haul longer trains as well as reducing carbon emissions. Gary Long, CEO of Genesee & Wyoming UK/Europe Region companies (G&W being the owner of Freightliner), described the Class 90s as ‘an investment in the future’. ‘Being carbon neutral by 2030 would be spectacular for the whole industry and we’re making a commitment to that right now’ he told Modern Railways.

G&W European Engineering Director Tim Shakerley also called for further infill electrification, particularly between major passenger routes, to create a greener, electrified freight network, adding ‘Freightliner is really keen to support rail’s zero carbon agenda, so acquisition of the Class 90s pushes our electric fleet into the future.’ He also said more thought was needed about battery shunting locomotives or other ways to move wagons around freight yards, adding ‘The big challenge is that you can’t load a freight train through the wires’.

Explaining the work needed to make ready the 13 Class 90s, Mr Shakerley commented: ‘Most of the work is associated with the drawgear and buffer ends, with the addition of freight couplings. We are also updating the TDM (time division multiplex) system so we can multiple them and putting in current limiters so that we don’t draw too much power from the network when we operate double-headed freight trains.’ The locomotives will retain their 110mph capability and drivers will still be able to select the ‘full power’ setting when a Class 90 is operating on its own and the highest level of performance is required.

Use of Freightliner’s elderly Class 86 locomotives will be run down as the ‘90s’ enter service, but the ‘86s’ will not be withdrawn completely – they will be put into warm storage with moves within the depot used to avoid damage to wheelsets and ‘pans up’ at regular intervals. ‘We’re still hopeful that there will be a continued growth of electrification across the network that will allow us to continue to expand our electrically-hauled freight services’ Mr Shakerley said. He indicated that any long-term plans for their use would probably see the ‘86s’ undergoing refurbishment and life-extension work to prepare them for service. 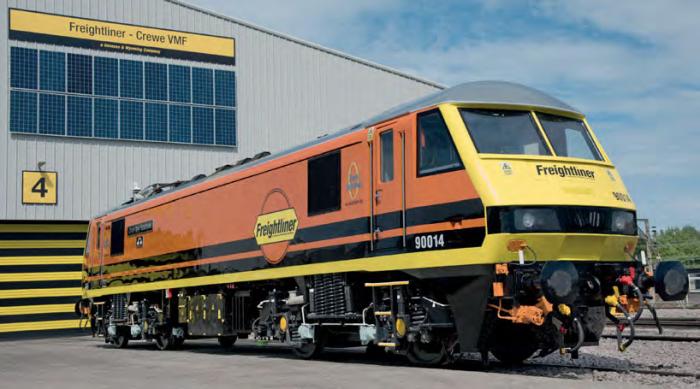 Ready for intermodal work: No 90014 in Freightliner livery at Crewe on 30 July 2020 following the naming ceremony.
Tony Miles 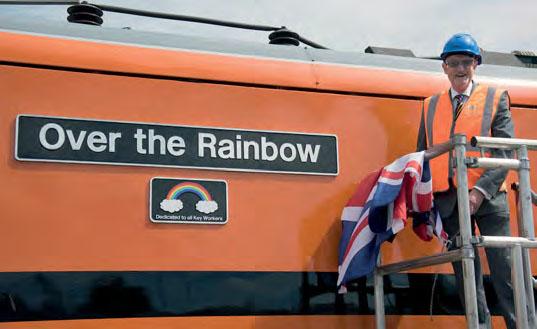 Over the Rainbow: Freightliner Train Planner David Clay unveils the new identity on No 90014.
Tony Miles