WORK ON the resignalling and electrification of the Fylde Coast line between Preston and Blackpool North is progressing, with weekend closures and rail replacement services in operation to permit the necessary engineering work.

Piling for eventual erection of the masts is now taking place, with most of the route between Preston and Salwick looking to be advancing well.

However, a much longer closure will be needed to complete arguably the most complex element of the project, which is remodelling Blackpool North station. It is understood the number of platforms will be reduced, with the new replacements being straighter than the present ones. The object is to simplify the track layout to improve the station’s operational efficiency, and will also include improvements to the layout of the extensive carriage sidings.

The resignalling scheme associated with the electrification of the line will sweep away the current manual signal boxes at Blackpool North, Carleton Crossing, Poulton, Kirkham and Salwick, with responsibility for the line being transferred to the Manchester signalling centre. A consequence will be the loss of the distinctive array of semaphore signals at Blackpool North.

At Poulton the junction with the closed branch line to Fleetwood, which is currently being restored to use by the Poulton & Wyre Railway Society (P&WRS), will be severed, but Network Rail has agreed that the spacing of electrification masts will be such as not to inhibit any future reinstatement of the junction. 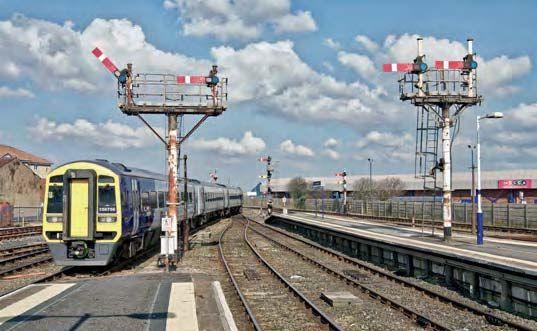 A new platform serving the P&WRS will be constructed on what is presently the up line from Fleetwood, which will have a direct pathway connection to the main line station. A new layout is planned for Kirkham & Wesham station, with the provision of a new platform and connecting footbridge and lifts, which will provide step-free access to both the existing and new platform to be located on the north side of the station. The new platform provides added capacity as well as improving the operational efficiency of services to both Blackpool North and South stations. The branch from Kirkham & Wesham to Blackpool South is not included in the electrification project.

Track alterations at Salwick, primarily involving the lifting of a disused siding that once served the adjacent works, are also intended to improve reliability of the route.

In addition to weekend closures, the main thrust of the work will take place from November this year, following the end of Blackpool Illuminations, and continue through to March 2018. During this period, the two big jobs of remodelling Blackpool North and Kirkham & Wesham will take place, together with completing the task of resignalling.

The line is expected to reopen in March 2018, with services operated by DMUs until May 2018, when a full electric timetable will be instigated.