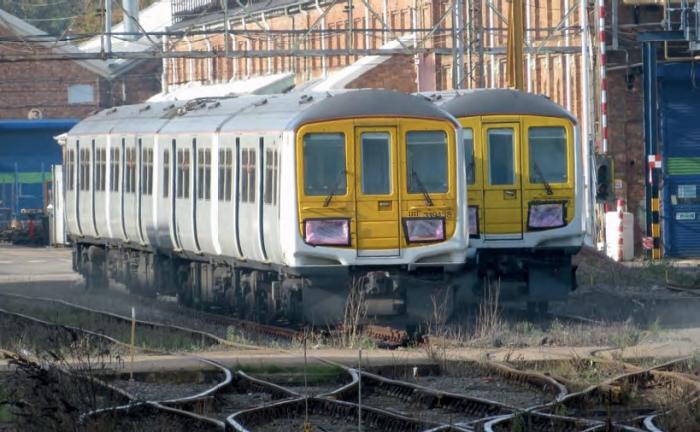 In for corrosion repairs: former Class 319s in the yard at Wolverton works on 28 October 2019.
Phil Marsh

RAIL OPERATIONS Group (ROG) has identified three return paths a day for a consumer goods operation between the port of London Gateway on the c2c line and Liverpool Street station in central London. The company’s Orion subsidiary intends to run former Class 319s on this route, converted into parcel tri-mode Class 769s with diesel engines for operation on freight-only lines. The eventual scenario envisaged by the company is local distribution by autonomous electric vehicles, forming a seamless connection between the port and central London shops.

The company has two Class 769s on order from Porterbrook (p79, last month), but is expected to be last in the queue for the units behind passenger operators Northern (eight units), Great Western (19) and Transport for Wales (nine). The first units likely to enter service are those for Northern, for which ROG is test operator. Tests in October saw those units achieving 100mph in diesel mode on level track.

Corrosion repair work on the passenger units is undertaken by Gemini Rail Services at Wolverton, after which they are taken by road to Brush at Loughborough for fitment of MAN diesel engines; each unit takes 55 days altogether. As with the passenger units, ROG’s ‘769s’ will have diesel engines fitted at Loughborough; a contractor for the interior work on the parcels units, involving removal of seats and installation of roll-cage securing points, has yet to be chosen.

ROG MD Karl Watts told Modern Railways that the former passenger EMUs are ideal for this type of work, as the double doors will facilitate easy access of roll-cages. By comparison, redundant Mk 3s, with narrower end doors, are unsuitable. Mr Watts said there could eventually be demand for up to 20 parcel ‘769s’.