RAIL.ONE HAS been selected as the proposed operator of a new sleeper factory that Network Rail plans for Bescot.

A public exhibition of proposals prior to a planning application took place on 8 January – this is the latest stage in the protracted process of securing an alternative to Cemex’s Washwood Heath sleeper production plant, whose site is required for construction of HS2. An early start to construction could see full production at Bescot at the beginning of 2020.

The proposed site of the factory, acquired by NR from DB Cargo, is at the west end of Bescot yard. It extends across the steam locomotive depot site and former diesel depot, as well as a large part of the Down yard.

Where the site adjoins about 35 homes, a sleeper storage and loading area with gantry crane is planned. A road would run within the site boundary for lorry access, including for incoming materials.

New to sleeper production in the UK, the PCM RAIL.ONE Group is headquartered in Germany and comprised of several companies and 11 production facilities for its range of track systems, with a presence in Germany, Romania, Saudi Arabia, Spain, South Korea, Hungary, Turkey, the United States and India.

With closure of the Washwood Heath plant, Network Rail’s other major source of concrete sleepers is the Trackwork Moll joint venture, producing up to 400,000 sleepers a year at Doncaster.

If approved, the new Bescot facility is planned to produce up to 600,000 sleepers a year, representing 60% of Britain’s supply, according to Network Rail. Ken Cordner 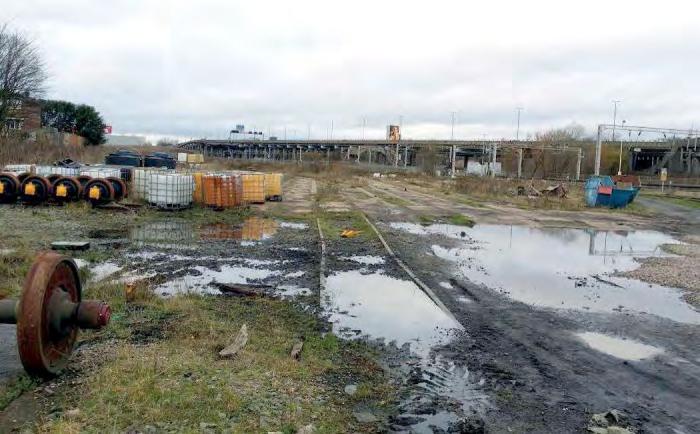 Proposed factory site: the area where the steam shed stood at the west end of the Down yard at Bescot.
Courtesy Network Rail