SOME OF the CAF DMUs for new Welsh operator Transport for Wales Rail Services could feature windows extending into the roof. The news follows ministerial suggestions that a sub-leet of two-car DMUs could be allocated for scenic lines.

James Price, Transport for Wales’s chief executive, said in early November that the idea was being investigated. TfW Rail’s commercial and customer experience director Colin Lea told Modern Railways that even without this facility the Civity DMUs would provide good views thanks to their deep windows, seats aligned with windows and numerous tables. CAF will supply 51x2-car and 26x3-car Civity DMUs to TfW Rail, built at its factory in Newport. The two-car units will be in two sub-leets, with 21 equipped with European Train Control System (ETCS) for the Cambrian lines.

Between Cardif and Swansea, the hourly ive-coach formations will increase capacity and complement the irst class on Great Western Railway’s hourly workings.

A further expansion of first class provision will take place on Cardiff to Holyhead workings – in December 2019 the current Mk 3 loco-hauled rakes will be replaced by three rakes of Mk 4 coaches cascaded from the East Coast main line.

The first of the 12 Mk 4 coaches are due in Wales in late summer, to enable crew training, gauge clearance and minor modifications to the Class 67 locomotives which will provide traction. The Mk 4s will operate three Holyhead to Cardiff services in each direction on weekdays, with complimentary breakfast, lunch or dinner in the first class restaurant car.

In addition to the CAF DMU order, Stadler will build 36x3-car tram-trains and 24 Flirt tri-mode units (7x3-car and 17x4-car) for the Valley Lines, along with 11x4-car Flirt DEMUs for other local services in the Cardif city region. TfW Rail will also retain 59 cascaded vehicles, mostly Class 170s which are due to transfer from Greater Anglia from late 2019.

The Cardif Bay branch will be double-tracked. From 2024, a track extension will enable tram-train to operate under tramway principles along the Bay line and continue across a road junction to a new terminus built on an area that is currently grassed. Cardif Council and the Welsh Government have aspirations to extend the line further. A temporary platform at the current station location will open alongside realigned track by 2022.

TfW’s rail projects director Karl Gilmore says some of the staf involved in the Valley Lines modernisation have experience of light rail, including the Sheield tram-train pilot (pp18-19). He anticipates the pilot providing some useful feedback but cautions that the change processes are diferent, with South Yorkshire’s tram-train vehicles having been introduced onto pre-existing light and heavy rail infrastructure.

In South Wales, high-floor cousins of the Sheield tram-train vehicles will predominantly operate as trains, with tramway principles applying only to a short section of route, he explains. The extension will use compatible types of rail, enabling assessment of extending operations into an on-street environment. 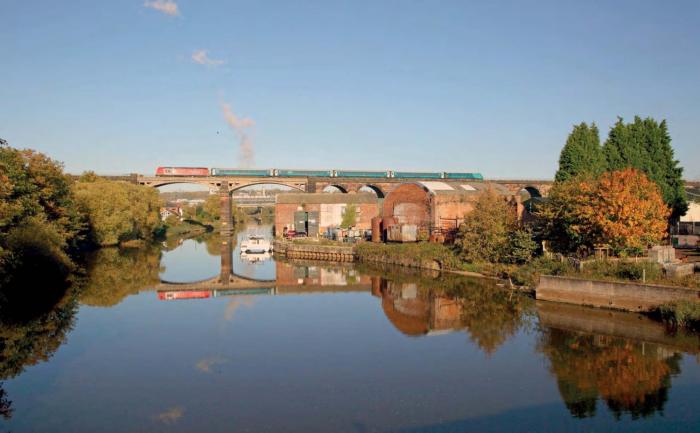 Autumnal relections: loco No 67013 with Mk 3s at Penmaenmawr with a Manchester to Holyhead service on 18 October 2018. TfW intends to phase out Mk 3s.
Jamie Squibbs 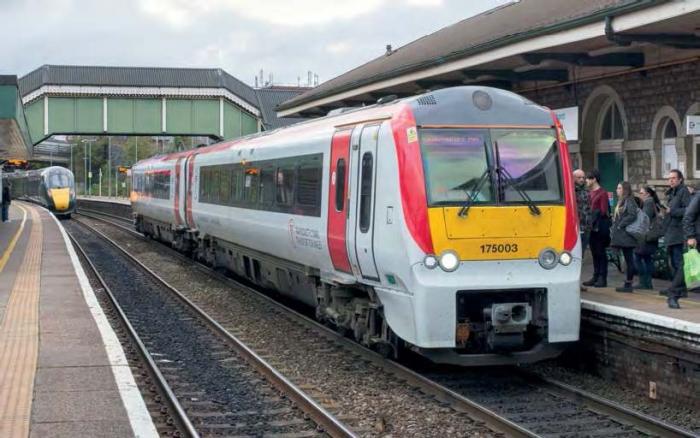 Improvements coming in South Wales: from 2024, TfW’s hourly Cardif-Swansea workings will consist of ive coaches, two of which will continue from Swansea to Carmarthen or Milford Haven. Between them, TfW and GWR will provide two services with irst class accommodation each hour between Wales’ biggest cities. Here a Class 175 unit in TfW livery calls at Bridgend on 6 November with the 10.31 Manchester Piccadilly to Milford Haven, while GWR’s 13.29 Swansea to London Paddington departs.
Rhodri Clark

FLEET EXPANSION The new trains will be maintained by their respective manufacturers. Stadler will also maintain the Class 170s and Mk 4s at Cardif Canton under its Train Service Agreement.

TfW Rail is committed to a 78% increase in the number of vehicles in the Wales and Borders leet. The efective increase will be greater still, given the reliability problems with the current ageing leet. At present 106 out of 127 units (including loco-hauled sets) are needed to operate all scheduled services, but having 21 units out of service would result in short formations, commonplace in recent autumns.

The Mk 3 coaches are in such poor condition that TfW Rail is reluctant to deploy them on busy weekends, such as rugby international days. Signiicant journey time reductions will result from electriication of the Core Valley Lines (north of Cardif), further improving train productivity.

There is contractual provision for TfW Rail to procure additional vehicles if necessary during its 15-year term, as add-ons to current orders or through cascades. Demand for further stock could arise through extension of TfW Rail services to Bristol or to Liverpool via Birkenhead, for example.

TfW Rail Services will spend millions of pounds providing Wheel Slide Protection (WSP) on Class 150/2 Sprinters, which will be replaced from 2022 as the new leets from Stadler and CAF enter service. Its predecessor, Arriva Trains Wales, did not install WSP while having 15 years’ use of the units.

The Class 150s are also undergoing Persons with Reduced Mobility modiications, at a cost of £10 million. Mr Lea told Modern Railways that the absence of WSP on Class 150s was a major cause of autumnal short formations and service cancellations.

At one point this autumn, six Class 150s were out of service pending wheel turning. Another was sent away for attention to rusting underloor components after becoming trapped in loodwater on the Aberdare line on 12 October as Storm Callum, one of the worst to hit Wales in several decades, coincided with TfW Rail taking over from ATW.

A Class 175 unit was badly damaged by a fallen tree. Mr Lea said that, despite the diicult start, the Public Performance Measure for TfW Rail’s irst three weeks was better than for the corresponding weeks in 2017.

Repairing the Class 175 required manufacture of a new cab front.

‘It’s diferent from what Wales has done previously’ he observed.

Mr Lea said: ‘We’re starting to build up wheelsets, cabs and spares which we know we’re going to need. It may be we’ve got cash sat there on the shelf but it’s the right thing to do for resilience overall.’

Cascaded stock will also ease the pressure by next autumn, with units of Classes 230 and 769 due to enter service by May. Rhodri Clark

’150’ far from home: one of the class departs from Rhyl with the 09.23 Holyhead to Wolverhampton on 10 November. The unit’s home depot and wheel lathe (in this vulnerable autumn period) is in Cardif.
Rhodri Clark