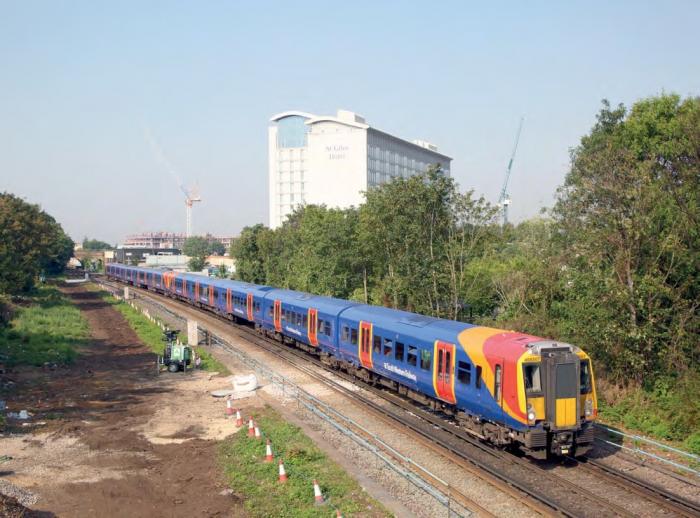 Feltham: resignalling here is high up on the Government’s list of priorities. A brace of Class 458s pass site clearance work for sidings for new Aventra stock on 27 August 2019.
Jamie Squibbs

THE GOVERNMENT has published a list of enhancement projects within the Rail Network Enhancements Pipeline (RNEP), following repeated calls from the industry for greater transparency.

The five-stage pipeline is a new process for Control Period 6 (2019-24), introduced following the problems with the enhancements programme in CP5 and the reclassification of Network Rail as a public sector body. Projects must pass through a five-stage process, including decisions to develop, design and deliver before they are listed in Network Rail’s Enhancements Delivery Plan (EDP). Previously projects planned for a Control Period had been listed in the EDP at the outset.

Among the schemes at the most advanced stage within the pipeline which have received a decision to design are the Trans-Pennine Route Upgrade, East West Rail Phase 2, the Hope Valley Capacity Scheme, Feltham resignalling and the reopening of the Portishead line in Somerset as part of the MetroWest programme. The next stage for these schemes will be the ‘decision to deliver’.

Asked about the delay in publishing the pipeline, Transport Secretary Grant Shapps told the House of Commons Transport Committee on 16 October: ‘I do not know the answer. As soon as it was brought to my attention, I thought it would be a very good idea to publish it, not least because we said that we would publish it.’ Mr Shapps also committed to publishing regular updates of the schemes in the pipeline going forward.

The Railway Industry Association has been leading calls for visibility of the pipeline, and Chief Executive Darren Caplan had recently branded the failure to publish it as ‘a disgrace’ (p9, last month). Mr Caplan welcomed the news, saying: ‘This comprehensive list of enhancements will now give rail businesses some more confidence to plan, hire and invest in preparation for upcoming work. And it will help ensure we can get to work to build an enhanced world-class railway in the coming years. We and our members will now examine the list further, and work with the DfT and wider rail supply community to deliver these upgrade projects.’