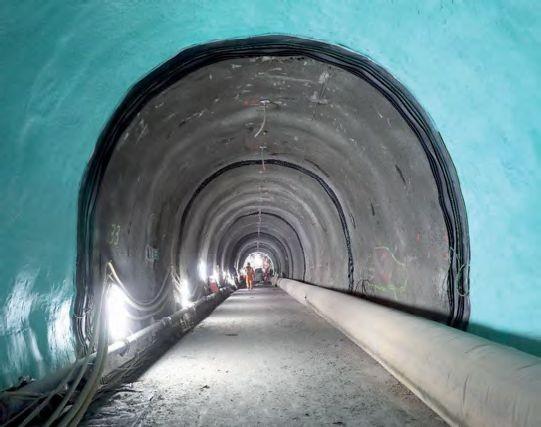 New tunnel: work on the Northern Line at Bank on 1 July 2019.
Courtesy TfL

TRANSPORT FOR London says over half of the construction work as part of the modernisation of Bank station has been completed.

The project, planned for completion in 2022, will create a new tunnel for the southbound Northern Line, enabling the existing platform to be converted into a customer concourse to reduce overcrowding. The lead contractor for the work is Dragados.

TfL says work to complete the new southbound tunnel is progressing well, with over 200,000 tonnes of material already excavated and waterproofing and concrete lining underway and work progressing on the cross passages to the new tunnel.

The new station entrance on Cannon Street is also beginning to take shape, with the structure to be completed this summer ahead of the start of interior wall construction and station fitout in the autumn. The escalator barrel from the entrance to the Northern Line platforms is complete and another to the Central Line platforms is nearing completion. The new entrance will include two new lifts, providing step-free access to the Northern Line and improved access to the Docklands Light Railway, while 12 new escalators and two moving walkways will improve access within the station.

The new southbound tunnel is planned to be connected to the existing Northern Line in 2021 during a closure of the Bank branch between Kennington and Moorgate.