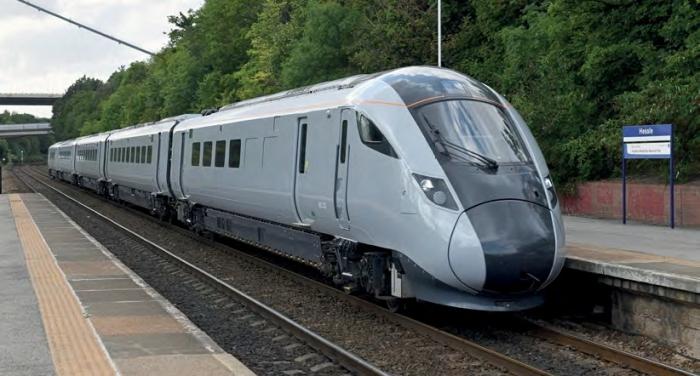 In the shadow of the Humber Bridge: TransPennine Express’s Class 802 Nova 1 bi-mode set No 802203, on a crew training run for Hull Trains prior to the arrival of the company’s own ‘802s’, passes through Hessle with 5Z82, the 11.05 Peterborough to Hull via the joint line through Lincoln and Gainsborough Lea Road on 20 August 2019.
Ian Lyall

HULL TRAINS is to name its new fleet of Class 802 bi-mode trains as ‘Paragon’, a name chosen due its meaning and significance in Hull.

The operator has ordered five Class 802s from Hitachi to form its Paragon fleet, financed by Angel Trains, which are due to enter service by the end of the year. Each train will also be individually named before entering service, with the company inviting suggestions.

The name Paragon was suggested by On-Board Experience Manager Patrick Tobin. The company says a Paragon means something or someone which is the very best, and the name is also shared by the station in Hull, which was renamed as Paragon Interchange in 2007. It says the naming is therefore a nod to ‘what is arguably one of the city’s most important features on the skyline’.