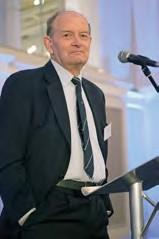 December’s visit to Hitachi’s Newton Aycliffe plant to see the roll out of the first UK-assembled Class 800 Inter-city Express Programme (IEP) train was, as they say in football, an event of two halves. The tour of the factory was a fascinating glimpse of a different approach to train production compared with, say, Bombardier at Derby. I hope to return for a detailed walk through the process.

However, when the railway technical press sat down with Hitachi Rail Europe’s Managing Director Karen Boswell and Project Director Andy Rogers, there was, how shall I put it, a marked lack of candour. Where the friendly Geordies (a tautology in my experience) in the plant had been had been only too pleased to explain, with obvious pride, the detail of the assembly process, information from the management on what happens next was in short supply.

To an extent this was understandable. Apart from the different Japanese industrial culture (the UK Managing Director of Olympus who left after raising the issue of irregularities is a case in point), many reputations are riding on the IEP, from the Department for Transport to the multiple banks funding the trains.

However, embarrassed dissimulation when an informed technical press asks straightforward, if awkward, questions, does little for corporate reputation. The contrast with the technical and commercial briefings provided by the European manufacturers when things gang agley is unavoidable.

For example, in the press release for the visit, Great Western Railway Managing Director Mark Hopwood was quoted as saying that passengers could expect to see IEP trains ‘operating on our network next summer and in regular timetable service in autumn’. Pressed for more detail on the programme, Hitachi would only repeat ‘autumn’. Informed Sources’ Third Law refers.

However, according to informed sources, the current plan is to introduce six daily diagrams from mid October, notionally during the week of the 16th. According to the Great Western Train Availability & Reliability Agreement with IEP train service provider Agility Trains West, 20x5-car Class 800 sets should be available for service from 19October.

Assuming that this delivery schedule is met, a large number of five-car bi-modes will be standing idle come October. Since they will be available for service, presumably DfT will be paying for the diagrams they are unable to cover.

But then, how many sets will actually be available? Another issue with no clear answer was the potential delay to electrical testing and thus acceptance.

Running under electric power on Route Section 3 (RS3), the Great Western main line’s IEP test track between Reading and Didcot, started in July and promptly stopped when interference issues with the overhead line electrification (OHLE) traction power supply emerged. Since a second unsuccessful attempt, with the train in its final electric power configuration, at the end of September, there has been no further electrical acceptance running onRS3.

Given that I first met Hitachi’s engineers back in 2003 when they had fitted a Class 312 with a three-phase traction package to create the first ‘V’ (for verification) Train for electrical interference testing, and that since then the Class 395 has been running happily under the wires on HS1, my first assumption was that the issue was related to the autotransformer power system on the new Great Western OHLE. Indeed, when I arrived at Newton Aycliffe and teased a senior Hitachi chum about acceptance running late he replied, ‘We’re not late, we just need the wires’. There was heavy emphasis on ‘we’re’

But at the formal briefing, Andy Rogers said that type testing was still progressing while Hitachi was working through the electrical interference issues with Network Rail. ‘We just have to come up with a solution, don’t we’, Karen Boswell added. This could have been a tactful response, given that ‘finger pointing’ on the issue had been causing concern at DfT, which is where any bucks associated with IEP stop.

On test: on 20 October 2016 bi-modal IEP No 800002 stands at Reading as working 5X87, North Pole IEP depot to Swindon; however, the train only went as far as Reading before heading back to North Pole. Chris Wilson 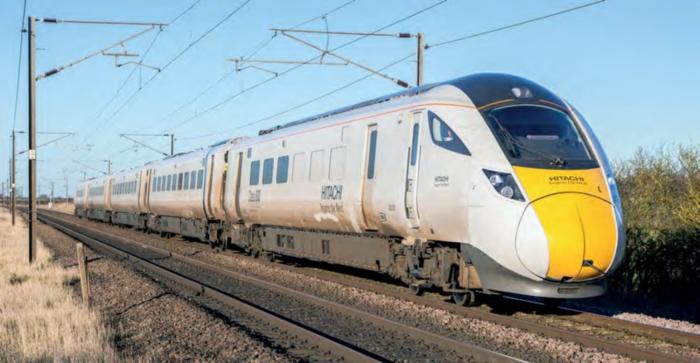 Documents touted for sale around the railway trade press last year had suggested that the IEP programme had been delayed by around 200 days. Given that I saw vehicles for Train 9, not due for delivery until July, on the shop floor, that figure seems improbable. However, a Great Western informed source subsequently reported that Hitachi had added 104 days to acceptance because of the unavailability of RS3 for electrical testing.

Yet when I asked how far the delay to electric test running has pushed the programme back, Karen Boswell told me ‘it hasn’t’. Andy Rogers added: ‘with the potential solutions we are looking at we don’t expect that [delayed electrical acceptance running] to have any programme impact’.

So what is the problem? Combining the input of multiple sources – the jigsaw technique – the overall picture emerging is that on the two runs on RS3, an imbalance between the two traction circuits in the nine-car test unit generated ‘spikes’ which affected the traction current supply, causing tripping. It is worth noting that similar problems were reported when the Class 390 Pendolinos first began running on the West Coast main line. The solution is relatively simple.

Another question raised at the railway press briefing concerned the ability of the bi-modes to keep to IC125 timings when running under diesel power. This is a two-part question.

First, the IEP Class 800s have their MTU Series 1600 R80L engines rated at 750hp (560kW) compared with the engine’s commercial rating of 938hp (700kW). This is in the interests of improved reliability and availability.

When asked if the Class 800 engines would be restored to their commercial output, as in the AT300 versions being supplied to GWR and TransPennine Express, Andy Rogers explained that with the extent of electrification the company had been told would be in place on the GWML, the impact of running under diesel on the remaining sections ‘would be minimal’. As a result ‘there is no requirement to change the rating of the engines’.

This expectation is based on the ‘Hendy dates’ for commissioning the Great Western Electrification Programme. Paddington to Cardiff is scheduled for completion by December 2018, when the full IEP timetable is introduced.

Speed is the second issue. IEP was designed as a 100mph train when under diesel power, although test running has shown it can run faster. According to Andy Rogers, Hitachi is working with GWR on end-to-end journey times to assess the benefit of the bi-mode’s superior acceleration at low speeds, plus the effect on station dwell times of the pocketed sliding power doors.

Great Western reckons power doors can save up to 1.5 minutes on platform procedures compared with slam doors on IC125. There is also some ‘padding’ in the current timetable.

However, the immediate challenge is October this year, when the Hendy dates are less obliging. Airport Junction to Maidenhead is due to be energised by June as part of the Crossrail programme. Reading-Didcot follows in December, although the ‘stretch’ aspiration brings this forward to September.

Assuming electric operation to Didcot, diesel running would be limited to the remaining 63 miles to Bristol Temple Meads via Bristol Parkway. As regular readers will know, DfT predated the current post-fact zeitgeist with its belief in the magical ability of multiple powered axles to overcome the laws of physics. The resulting loopy specification for IEP means that it can indeed zip away like a metro car, but that acceleration lasts only as long as the simple formula Tractive effort equals Power divided by Speed delivers at the wheel tread.

A quick calculation shows that a five-car bi-mode starts to run out of puff at around 7mph. After that, the IC125’s 25% more tractive effort per tonne than a bi-mode under diesel power will become increasingly apparent. So IEP versus IC125 is like Usain Bolt taking on Mo Farah over 1,500metres.

Nor can I see how the claimed shorter dwell time comes into the equation – at least in real life. Suppose that both trains leave at the same time and the IC125 arrives at the next station first. Say the bi-mode arrives a minute later, then the theory is that it can get passengers on and off and with the doors closed ready to go at the same time as the IC125, with its longer dwell time, is due to leave.

That is going to require a lot of discipline at station stops. Network Rail apprentices have taken on, and beaten, Royal Navy teams in the Navy’s annual Junior Leaders Field Gun competition. Getting a ramp to the far end of the platform, unloading a wheelchair from an IEP, and pressing the CD-RA plunger could be an idea for a return match.

More seriously, while the sliding doors are faster to clear than manually monitored slam doors, passengers alighting and boarding will still have to pass one at a time through the saloon end doors. The 1.5 minutes seems optimistic.

So I suspect, as always, comparative performance will come down to grunt. But I was surprised by one recent report from a reliable source claiming that DfT’s performance modelling had indicated that running at the standard IEP engine rating could add up to 15 minutes to the London-Bristol journey time via Bristol Parkway.

Intuitively this sounded like a severe case of wrong-end-of-the-stick grasping. But then I spread-sheeted the ultimate doomsday assumption that when IEP enters service in October the bi-modes will be restricted to diesel power all the way from Paddington to Bristol. A crude analysis, assuming 125mph running throughout, gives a journey time difference not far short of 15minutes.

Now that seems highly unlikely, although with the fated abbreviations IEP and GWEP in conjunction and a virtual information blackout, who knows? No wonder, then, that there is pressure on DfT to reach an agreement with Agility Trains West to unleash the full power from the MTU engines.

Of course, the easy way out in October would be to allocate the IEP diagrams to the Oxford service, where they could replace the Class 180 DMUs. Since January these have been sub-leased by GWR from Grand Central for four months.

One final point raised at the press conference concerned the impact of the move to an all bi-mode GWR fleet on the depots at North Pole and Stoke Gifford, what Karen Boswell called the ‘unintended consequences’ of the change. These issues are being worked through with Hitachi’s suppliers. On the related issue of whether the increased diesel mileage, much of it at full power, would require refuelling mid-diagram, the official view is that this will not be necessary.

Meanwhile, Stoke Gifford Depot is already carrying out post-production work for Newton Aycliffe, as well as providing the base for testing on the GWML. Highlighting the financial incentives imposed by the ‘no train – no payment’ IEP agreement, as well as routine maintenance, staff at Stoke Gifford are reported to be training for a range of contingencies including damaged trains and even damaged depot infrastructure.