Pan up north of Newcastle: Azuma No 800109 southbound on the East Coast route at Crowden Hill while working 5Q42, the 09.35 Craigentinny to Newcastle Central test run, on 12 July 2019.
Bill Welsh

As the poet Longfellow almost observed: Though the mills of Informed Source grind slowly; Yet they grind exceeding small; Though with patience Captain Deltic waits, With exactness grinds He all.

This poetic flight of fancy was inspired by the appearance, at least unofficially, of the Variable Track Access Charges (VTAC) for the Hitachi Class 800 vehicles. More properly the Variable Usage Charge (VUC), which is the basis of Network Rail’s charges to train operators for the notional wear and tear their vehicles impose on the infrastructure.

My mills started grinding on what was then the Intercity Express access charges in 2011 when the hapless Theresa Villiers was Rail Minister. Her officials gave her some comparative VUC figures which were meant to make IEP look good, but at the same time were ludicrously high.

That was after IEP had changed from a train with power cars to a multiple-unit. It was thus possible to compare notional VUC prices, expressed in pence per vehicle mile, against other high-speed multiple-units. Except that until the trains were built, we didn’t have the official charges.

A VUC price list is published on the Network Rail website at the start of each Control Period (CP) and updated as new rolling stock comes along. But throughout CP5, which started on 1 April 2014, Class 800s were noticeable by their absence.

Periodically I would query this absence with the Network Rail press office, who would trot down to the small back room where the VUC wonks beaver away. And the message was that it was all proving very difficult.

In the VUC world, multiple-unit vehicles are either Trailers (T) or Motored (M). A five-car Class 800 fits this template – sort of – but a nine-car has three types: motor vehicles, plus trailer vehicles with two radically different bogie designs – inside frame and outside (H) frame. These bogies generate different track forces.

On top of which the ‘Motored’ vehicles are gaining an additional 750kg each with the fitment of the Electro-Magnetic Compatibility (EMC) filters at one end. Perhaps not surprisingly, while the CP6 Price List published in April contains such exotica as the Vivarail Class 230 and Porterbrook’s mythical Class 769, the cost of running a Class 800 remained unknown.

Officially, that is. However, informed sources have provided the data in Table 2. 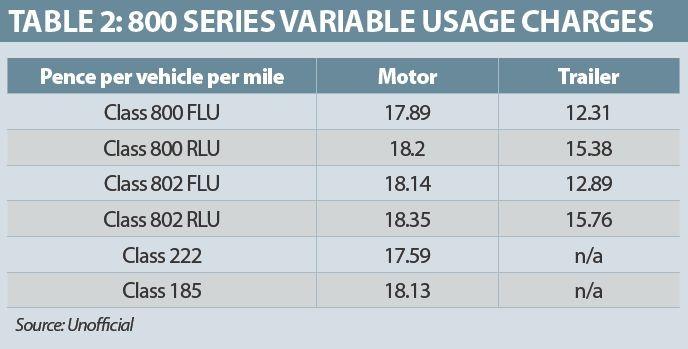 As you can see, trying to get averages for Class 800 vehicles has stretched the VUC price generator to the limits, so that we now have different rates for Full Length Units (FLU) and Reduced Length Units (RLU) as with the

Class 345 Crossrail EMUs. For example, the driving cars count as Trailer cars, but because they carry pantograph, transformer or a kitchen, they are as heavy as a motored car. With a nine-car unit, you have genuine trailer cars which are much lighter (Table 3). Class 802s have additional roof-mounted equipment so most vehicles are slightly heavier than the equivalent Class 800, but three vehicles are slightly lighter. Don’t ask.

By now you may share my view it is not a case of modern trains with distributed traction not fitting the VUC system, but that the system does not fit 21st century trains. Since Network Rail needs to know what it charges for a train, and since most new trains are fixed formation, why not calculate the total charge for a Flirt or a Nova based on the sum of the actual calculated VUC values for each vehicle?

Since one of the objectives of the VUC is to encourage train operators to buy track-friendly rolling stock, knowing how much each vehicle in a unit was costing, rather than relying on fudged averages, would surely concentrate the mind. There are over 660 prices for freight locomotives alone, based on commodity being hauled, calculated to four decimal places. Surely something simple like a passenger multiple-unit can’t be that hard. 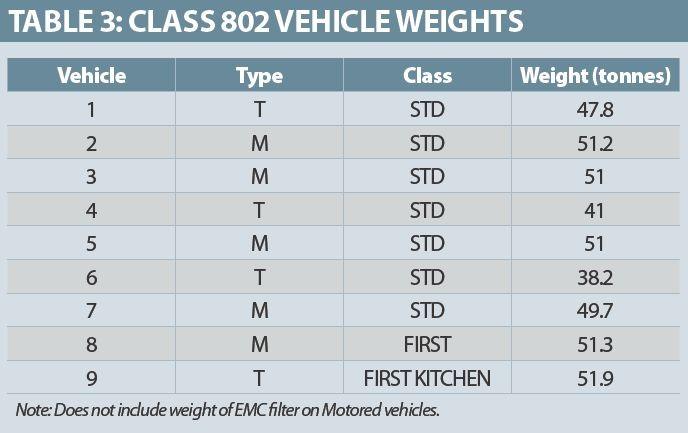