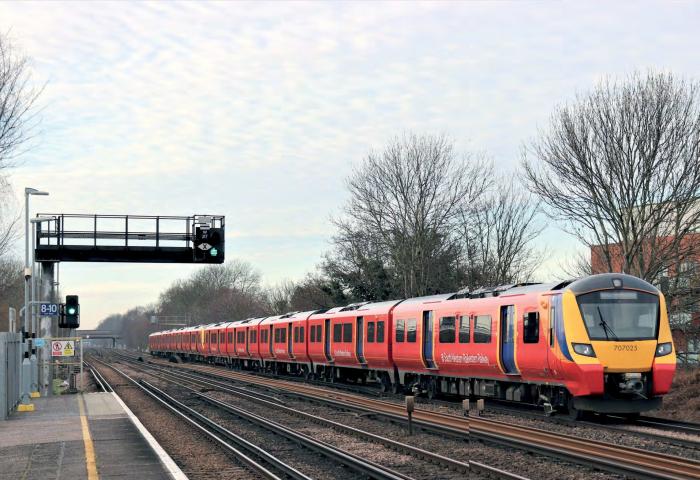 TIN-watch graduate: reliability of the SWR Class 707s improved quickly and they soon exceeded the 50,000 MTIN MAA threshold for inclusion in TIN-watch. Nos 707025/010 arrive at Raynes Park with the 11.11 Shepperton to Waterloo service on 20 January 2020.
Philip Sherratt

I'm beginning to wonder whether adding Technical Incidents per 100,000 miles to the table was such a good idea after all. Even when a fleet has to score under five to be borderline respectable, there are some depressingly large numbers as you go down the table. On the other hand, it provides a more direct overview than comparing Miles per Technical Incident.

But begone dull care. For this month I thought I would see if I could find some good news.

A fair criticism of TIN-watch is that, while it provides a monthly snapshot of fleet reliability, to find out whether performance is improving you need to get out the back numbers. September’s search for bathtub curves showed the best fleets were indeed getting better but covered only selected cases from the five manufacturers.

This month’s analysis adopts a much simpler approach: has reliability improved over the last six reporting periods? And it covers every new fleet. Well, every fleet except the full length Class 345s, which have been all over the place for various reasons.

But before starting I must rectify a disservice to my chums at Siemens. Hitachi and ScotRail have, rightly, gained plaudits from their achievement with the Class 385 fleet in topping the TIN-watch new trains reliability table (uncredited). However, there is an elephant in the current table.

Hitachi reigns supreme only because, just seven periods after TIN-watch was launched, South Western Railway’s Wimbledon depot-maintained Siemens Class 707 Desiro City fleet had rocketed upwards like an English Electric Lightning on reheat, smashing through the 50,000 MTIN MAA ceiling above which new trains are deemed to have become established.

So, to put the record straight, Figure 3 shows the progress of the ‘magnificent six’ fleets which featured in the first TIN-watch table. As you can see, every fleet has improved. I hope I have been forgiven by Siemens and the Wombles.

And I expect to be saying goodbye shortly to the impressive Class 385s as they too pass the 50,000 MTIN MAA mark and leave the reception class behind.

What has emerged as the number of fleets in TIN-watch has increased is that if you want to buy a halfway reliable train you need to order it from Hitachi or Siemens. True, they have been in the UK market longer than other manufacturers, but the cold numbers are demonstrating that reputations count for nothing until a train has run on the UK network.

Figure 4 shows the change in MTIN MAA over the last six railway reporting periods for the Hitachi and Siemens fleets. As you can see, all but one of the fleets are over 10,000 MTIN MAA and all but one has improved.

When looking at the scale of the improvement, it is worth noting the period covered by the chart aligns with the Covid-19 restrictions. Social distancing has affected working practices in depots. We must also pay tribute to those key workers who have kept the trains not only running, but cleaner than ever before.

When the Class 385 fleet disappears off the top of the chart, the LNER Class 801 electric Azumas will take over as the leader of the pack, albeit with the Thameslink Class 700 Desiro Cities hot on their heels. Having entered the table at a relatively high figure, I would have expected a bigger improvement for an all-electric fleet over six reporting periods. But that is being hyper-critical. 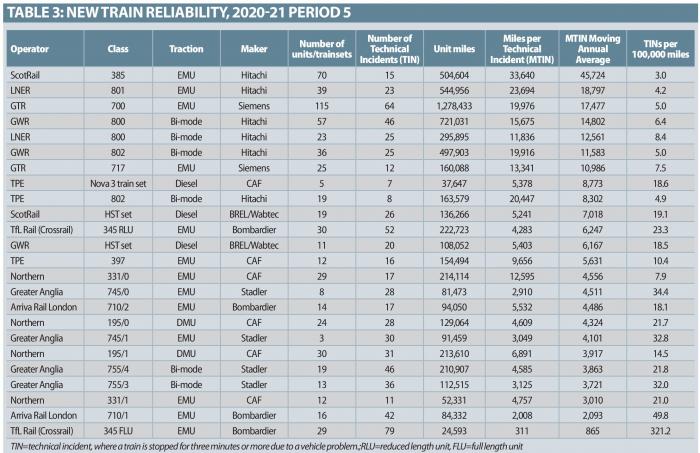 If you have tears, prepare to shed them now. For a fair comparison Figure 5 should be to the same scale as Figure 4, but then there would be an awful lot of empty space at the top.

As you can see, the ‘best of the rest’ – the CAF Nova 3 Class 68 diesel-hauled trains and the Crossrail Class 345 Reduced Length Units (RLUs), have actually got worse over the past six reporting periods. The Class 345 software and signalling interface issues were reported in detail in the September column.

There is also mitigation in the case of the Greater Anglia Stadler Class 745 electrics. These are being fed into service gradually and small fleets are prone to one bad day ruining the overall reliability for a reporting period.

Otherwise, every fleet improved over the six periods – if only marginally, with TransPennine’s CAF Class 397 EMU fleet producing the biggest gain in absolute terms, from 4,362 MTIN MAA to 5,631 MTIN MAA.

In terms of percentage improvement, the joint leaders are the Class 397 and the Class 755/3 at 30% over the six reporting periods. However, we should note that quite a lot of not much is still not much. 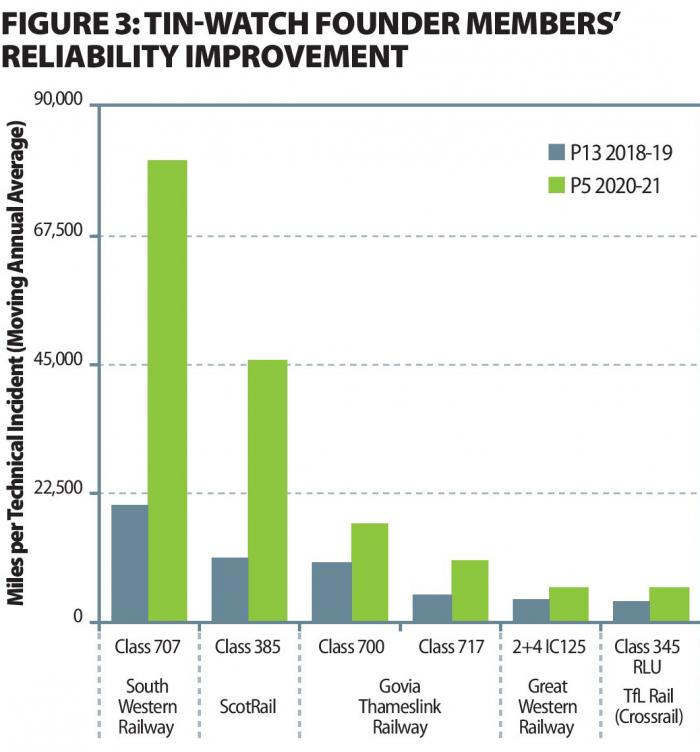 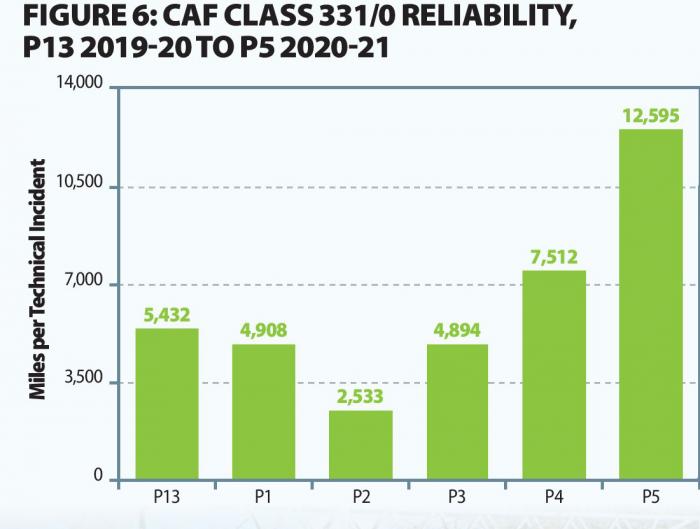 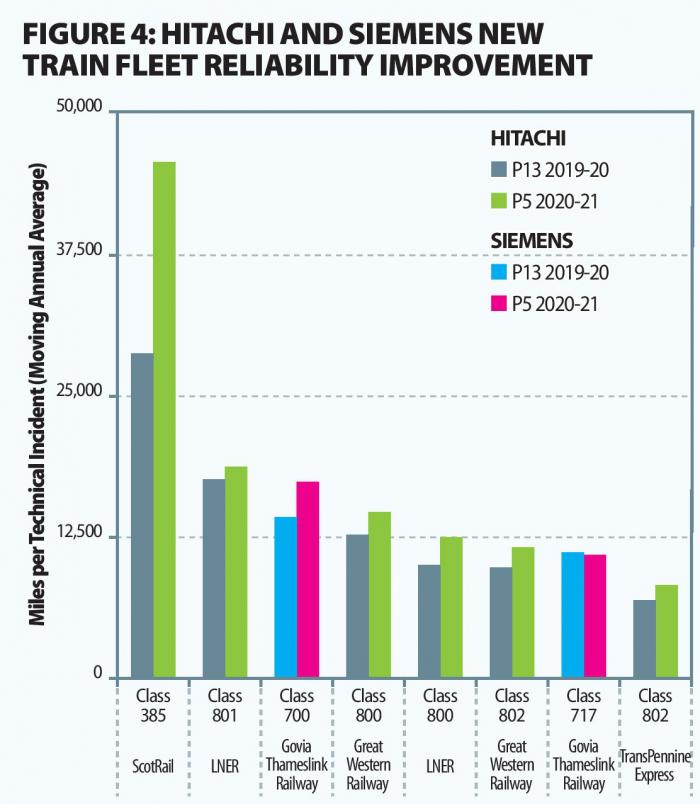 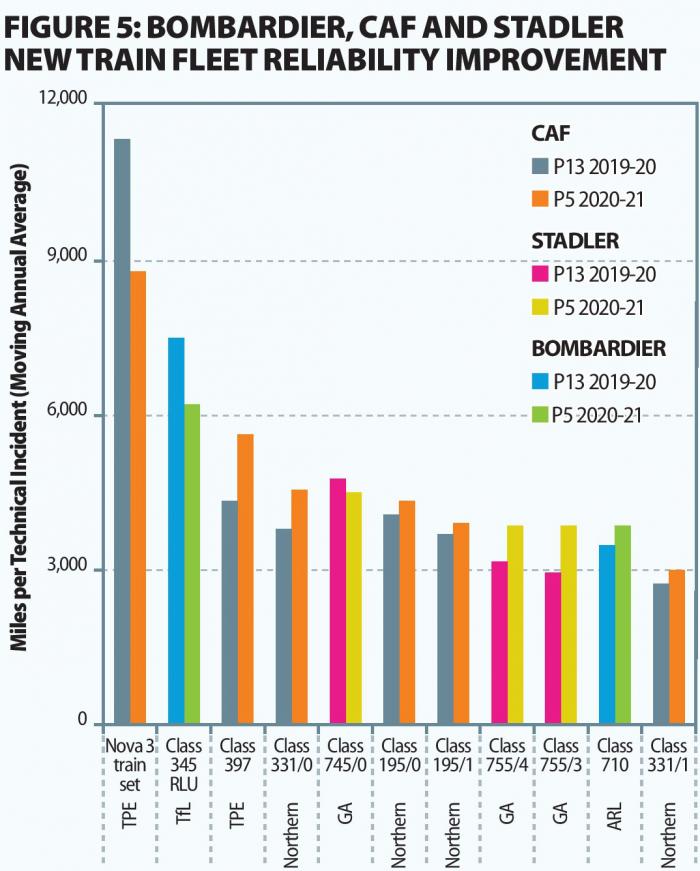 I thought it would be a good idea to end with an example of a second division fleet improving steadily period-by-period. The Moving Annual Average is slow to recognise improvement, so I plotted the performance over each of the six periods covered in this analysis.

This resulted in a frustrating series of ‘one step forward, two steps back’ bar-charts composed of ups and downs. Then the CAF Class 331/0 provided exactly what I was seeking. It may be a hostage to fortune, but Figure 6 is what is supposed to happen. 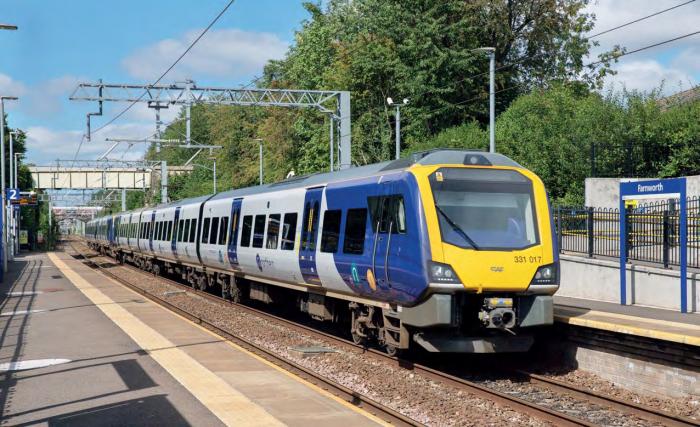 Signs of improvement: Northern’s CAF EMU No 331017 leads a classmate at Farnworth with the 11.59 Blackpool North to Manchester Airport service on 24 August 2020.
Tom McAtee