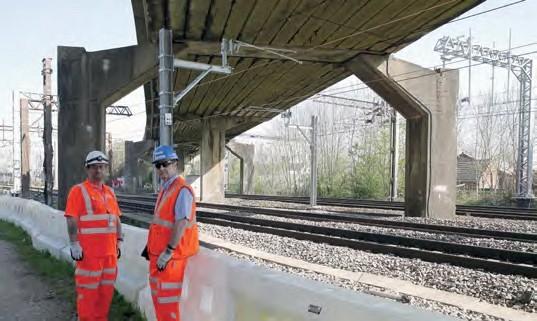 THE EAST West Rail Alliance (Network Rail, Atkins, Laing O’Rourke and VolkerRail) has completed its first electrification project, carried out in possessions between Christmas 2018 and the May Day Bank Holiday.

The work commenced with the installation of a new overhead line stanchion on the down slow line under Bletchley flyover at Christmas, followed over Easter by the rewiring of 350 metres of the West Coast main line around and under the flyover.

The Bletchley area, designated Section 2C in the EWR project, comprises 6.1 kilometres of track and signalling extending to the western extremity of the former Varsity line at Newton Longville. Also included is the elevated 600 metres of track on the 60-year-old flyover which crosses the WCML just south of Bletchley station. Section 2C track was taken out of use at the start of 2019, with track lifting scheduled to be completed by June.

The overhead line electrification (OLE) was originally hung from the flyover when the WCML was electrified. Under the new project the equipment was removed from the decking and rehung from nine new OLE masts which will enable the flyover deck spans to be lifted by the EWR Alliance in due course.

The EWR Public Inquiry in Milton Keynes ended in early May and a decision is expected by the end of the year. Phil Marsh

NETWORK RAIL has awarded framework contracts to deliver signalling and telecoms across the country during Control Period 6 (2019-24).

The frameworks are split into six geographical lots, awarded as follows:

The frameworks will deliver projects of varying value, including standalone level crossings, standalone major telecoms and related civils works. The remaining two tiers, minor and major signalling, targeted towards simple component replacement and major resignalling and recontrol respectively, will complete the three-tier strategy for CP6 signalling delivery when they are awarded in June 2019 and January 2020.

A NEW substation has been installed at Low Meadow Farm, north of Luton on the Midland main line, as part of the route’s upgrade. Network Rail says the substation is the first of eight to be installed and is a key step in the L2C (London to Corby) electrification project. In addition to the extension of overhead wires north of Bedford to Kettering and Corby, the introduction of additional electric trains on the stretch south of Bedford will increase power demands. 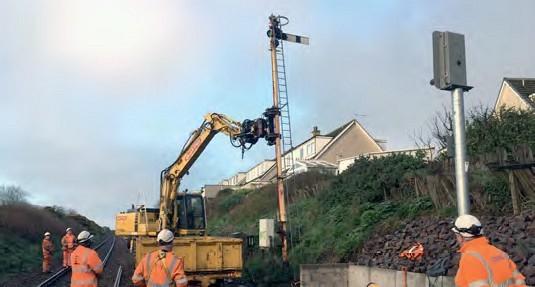 Out with the old: a semaphore signal is removed in Aberdeen on 28 April 2019. Courtesy Network Rail

THE FIRST phase of signalling improvements between Aberdeen and Stonehaven was commissioned by Network Rail over the weekend of 27-28 April.

New LED signals and axle-counters have been brought into use, while Newtonhill signal box was decommissioned and control of the signalling section relocated to Aberdeen. NR says the new signalling delivered increased capacity ahead of the May timetable change.

Part of a wider £13.5 million project between Aberdeen and Stonehaven to increase capacity, the work involved track and signalling improvements and the installation of a new crossover at Craiginches, which will be brought into service as part of a second phase of commissioning.

TEIGNBRIDGE DISTRICT Council has granted approval for Network Rail’s plans to deliver a new sea wall at Dawlish. NR subsequently awarded a contract for the work to Bam Nuttall.

Construction was due to start at the end of May and will take nine months, although work will be halted during the high summer holiday season. Network Rail says the scheme will provide increased protection to the town for the next 100 years.

Following Network Rail’s planning submission to the council, Transport Secretary Chris Grayling confirmed the company would receive up to £80 million of further funding for the work. NR is also developing plans to increase resilience at two other priority areas, which are the cliffs between Parsons Tunnel and Teignmouth and the cliff area to the east of Parsons Tunnel.

Waverley works: the extended platforms 5 and 6 take shape in this view of 5 January 2019. Ian Lothian

A £25 MILLION upgrade at Edinburgh Waverley has been completed by Network Rail. The work has involved lengthening platform 12 at the station to 204 metres to accommodate eight-car ScotRail Class 385 EMUs as part of the Edinburgh Glasgow Improvement Programme (EGIP), while platforms 5 and 6 were extended to 275 metres to accommodate 10-car LNER Azumas as part of the Intercity Express Programme. The commissioning of a new crossover between platforms 10 and 11 at the station brought the project, which began in April 2017, to a close.

NETWORK RAIL and contractor Amco have begun work to build a second platform on the down side at Dunbar station.

The £13 million project will deliver a new 271-metre-long platform and fully accessible steel footbridge with sandstone clad lift towers at the East Lothian station. Engineers began working on site during the second week in May, with initial work concentrating on clearing vegetation and redundant structures and track.

Construction work will take place until early 2020, with the new platform being operational from December 2019. Currently the station has only a single platform on the up side, meaning down trains must cross the East Coast main lines to cal

SIEMENS HAS been awarded a €36 million contract by Network Rail to upgrade the GSM-R (global system for mobile communications – railway) cab radios of the UK’s rolling stock fleet. The work will begin in October, with 9,052 cabs to be upgraded over a 30-month period and completion in March 2022. Siemens will also deliver 1,948 spare communication radios, making a total of 11,000 radios. Each train will be equipped with Siemens Mobility’s V4.0 model cab radio, which the company says will provide train operators with improved interference resistance, communication quality and performance. Siemens says it has completed a series of trials with NR covering more than 100 trains to demonstrate and prove the GB version 4.0 software and Nexus hardware, achieving an average mean time between failure in excess of 50,000 hours. 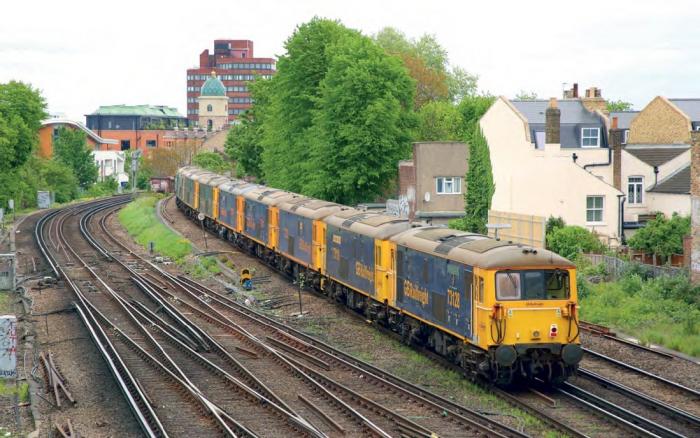 EDs going home: following work on an engineering possession in Kentish Town, no fewer than eight Class 73s joined up for a return journey to Tonbridge yard as working 0X36 on Bank Holiday Monday, 6 May 2019. The ensemble is seen here passing through Brixton. Jamie Squibbs