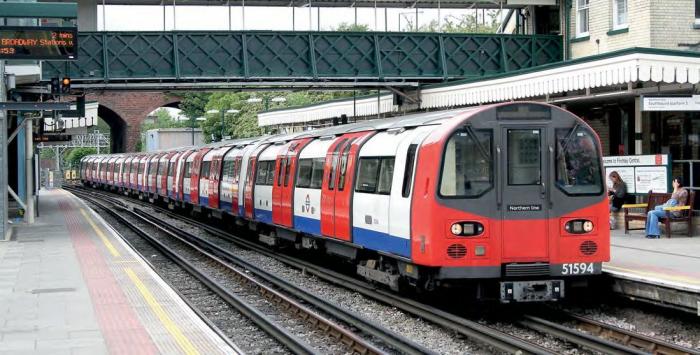 TRANSPORT FOR London intends to award a contract for additional trains for London Underground’s Jubilee and Northern Lines in September.

A report to TfL’s Programmes and Investment Committee explains that technical evaluation of bids has now been completed, and a ‘preferred bidder’ report was expected in July. The Jubilee and Northern Additional Trains (JNAT) procurement covers 10x7-car trains for the Jubilee Line and 17x6-car trains for the Northern Line to boost frequencies as part of the world class capacity scheme. Both lines utilise Thales communicationsbased train control (CBTC) signalling, which has the capability to support a more frequent service, but do not have the required number of trains to do so. The Jubilee and Northern Lines currently operate the technically similar 1996 and 1995 stock respectively, both of which were built by Alstom.

The Jubilee Line will be first to see the additional trains as it has a better business case and the required infrastructure works will be completed first. Track renewals to provide a reversing facility at West Hampstead will allow the present 30 trains per hour (tph) service to extend operation from one to three hours in each peak period between West Hampstead and North Greenwich from March 2018. Completion of power strengthening and cooling ventilation fan upgrades will then allow an increase to a train every 115 seconds from April 2019. Further upgrades including enabling works at Stratford Market and Neasden depots and signalling modifications will enable another frequency boost in late 2020; TfL says the base case is a ‘highly resilient’ 34.3tph service (a train every 105 seconds) but the aim is still to move to 36tph (a train every 100 seconds), which will ‘continue to be explored through continuing optimisation of the signalling design’.

For the Northern Line, improved train utilisation, track enhancements, braking system, software and power improvements will in the interim support an increase in the peak service on the Morden branch to 32tph from April 2019. The long-term goal is to achieve a 30tph service on both the Charing Cross and Bank branches and both northern branches, and at this point the additional trains will be needed. TfL says in practice the service level varies depending on location and time but has been generalised to 30tph.

Works required to support this scheme include provision of five additional stabling spaces at Morden depot, a new depot at Highgate, track upgrade at East Finchley, power strengthening at 22 substations and modifications to the signalling systems and trains. The aim is to start works at Morden depot in October, to complete the new Highgate depot by May 2021, the East Finchley scissors crossover by February 2022 and to introduce the 30tph timetable in April 2023. May 2021 will also see the opening of the Northern Line extension from Kennington to Battersea, which is now under construction; this will initially operate with a peak service of 16tph using the current fleet, with an increase to 30tph planned for April 2023. Maintenance of the Northern Line’s 106 1995 stock trains is presently undertaken by Alstom, but LU assumes it will maintain the additional trains using the new standalone maintenance facility at Highgate.

Meanwhile, the third line seeing improvements under the world class capacity scheme is the Victoria Line. A 36tph peak timetable was introduced for 90 minutes in each peak in May this year (p11, June issue), and as part of a phased approach to delivery this will increase to a three-hour peak service at this frequency in June 2018. The full scope of infrastructure and signalling upgrades to support this has been delivered, and no additional trains have been required.

TfL says it has achieved efficiencies in the upgrades to both the Jubilee and Northern Lines by applying value engineering to achieve scope reductions.