EVERY TRAIN REPLACED AND ISOLATED OLE FOR VALLEY LINES BRIDGES 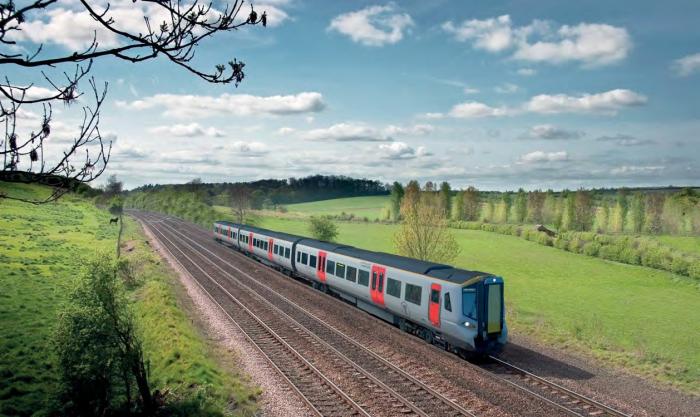 Built in Wales for Wales: visual of CAF Civity DMUs ordered by KeolisAmey for the new Welsh franchise 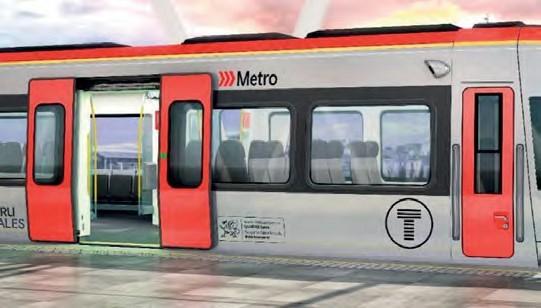 THE WELSH Government has appointed KeolisAmey as its Operator and Development Partner (ODP) for Wales & Borders services following a ‘competitive dialogue’ process.

The 15-year contract will begin on 14 October, when Arriva Trains Wales’ 15-year term ends. In September 2019, the Core Valley Lines (CVL) – radiating from Cardiff Queen Street – are due to transfer from Network Rail to the Welsh Government.

Keolis UK will move its headquarters from London to a new office in Wales by 2019. Keolis will relocate its global rail division from Paris to Wales by 2020. Amey will open a design hub in Wales, offering consultancy services. A shared services and customer contact centre in Wales will provide services to the KeolisAmey businesses, which include Docklands Light Railway and Manchester Metrolink.

The ODP will operate and maintain the CVL and supervise electrification and other improvements, to be delivered by a separate Infrastructure Delivery Partner. Funding for this work totals £738 million, including £125 million promised by the UK Government in 2014. Transport for Wales, a government-owned company, will hold back 40% as contingency.

KeolisAmey has opted to use continuous overhead line equipment but discontinuous power on the CVL, meaning isolated OLE will be installed under bridges. On reaching a permanently earthed section, trains will automatically switch from 25kV overhead to on-board battery supply, but the pantograph will remain in contact with the overhead cable, ready to collect power after the section. The company believes this method of reducing costly and disruptive engineering works could revive the business cases of cancelled electrification schemes. Hopes of having money left over for other schemes rest partly on this choice of technology. TfW says a total of 172km of track will be electrified.

Colin Lea, bid director for Keolis and now mobilisation director for the ODP, said this system is used elsewhere but not in the UK. ‘We think this will create a new business case for electrification’ he said. ‘This technology could massively help certain schemes that have been struggling because of bridges and tunnels and even in areas where it’s difficult to put up big gantries.’

The move avoids disruptive engineering works on 55 structures on the CVL. Only one bridge, near Ystrad Rhondda, will require a raised deck. Radyr to Ninian Park is also proposed for electrification, although it has not previously been included in the definition of the CVL. Battery operation will apply from Ystrad Mynach to Rhymney, where the station area will be electrified. Rhymney is an overnight stabling point.

The asset transfer excludes the Valley Lines from Cardiff to Penarth and to Bridgend via Barry. The Welsh Government has no direct relationship with Network Rail, although it has now secured a presence on Network Rail’s board, and there is no prospect of electrification towards Barry.

Consequently, the Rhymney line will receive tri-mode Stadler Flirt units, operating on diesel, battery or overhead power. Through running between Network Rail and Welsh Government metals will preserve journeys from Penarth and Barry to Cardiff Queen Street. The units will be able to run for 40 miles between recharging, thanks to their three large battery modules.

The remainder of the CVL will receive Stadler Citylink light rail vehicles, similar in length to Class 150s and capable of running on-street.

They will share tracks with heavy rail stock in places. Welsh Transport Secretary Ken Skates described them as tram-trains, but ODP chair Lee Jones, currently Amey Rail’s strategic growth director, said: ‘We would term this train-tram rather than tram-train. There’s still freight [on the Core Valley Lines].’ Although the pilot tram-train project in Sheffield has yet to commence operation, he foresaw no technical or standards obstacles for the CVL vehicles. He happens to be a non-executive director of the Rail Standards & Safety Board! 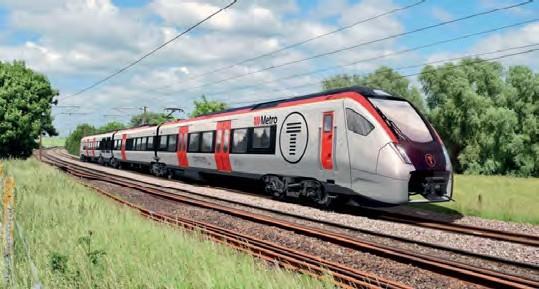 He said the CVL will continue to be controlled from the Wales Rail Operating Centre. Additional double track will be needed in 15 locations to support increased CVL frequencies.

A new depot for the Citylink fleet in Taffs Well will be funded by £100 million from the Welsh Government, providing a base for 400 train crew and 35 rolling stock maintenance staff. It will house a South Wales Metro integrated control centre, employing 52 staff.

The UK Government’s cancellation of Swansea electrification precludes electric traction for Cardiff to Maesteg services, which serve three intermediate stations on the main line before diverging at Bridgend. Stadler Flirt DEMUs will be ordered for the Maesteg, Ebbw Vale and other local services which use the main line east or west of Cardiff. These could easily be converted to bi-modes, should more electrification be funded.

Wales & Borders’ largest new fleet will be Civity DMUs from CAF’s Newport factory, all in service by September 2022, except for 7x2-car units which will arrive two years later. These will operate long-distance and rural services, including the ETCS-equipped Cambrian lines.

Mr Lea said it was ‘astonishing’ that even the Conwy Valley line would have brand new trains. This could raise the possibility of through running to the branch from Chester or interworking of units to restore an evening commuter departure from Llandudno to Blaenau Ffestiniog.

DMUs will provide first class accommodation between Swansea and Manchester from 2024.

Two-car units will be attached and detached at Swansea to maintain through services between West Wales and Manchester.

The new trains represent £800 million of investment and a 65% increase in capacity. The Welsh Government intended to purchase the trains but changed its mind a week before the ODP contract was signed because it received a leasing offer which undercut Treasury discount rates. TfW chief executive James Price said the trains would be ordered by Keolis and leased from the manufacturers.

The total value of the ODP contract is said to be £5 billion. Revenue risk is shared between the ODP and Welsh Government. The former will break even if it meets TfW’s growth estimate, which Mr Price said was conservative. TfW and the ODP will share the financial gains from any higher growth.

Welsh Transport Secretary Ken Skates said passenger growth was forecast at about 74% by 2030, and the contract would save 16% on the current Wales & Borders subsidy. He said he believed the current contract, awarded by the UK Government in 2003, involved the operator spending about £600,000 on stations over 15 years. ‘In contrast, the figure will be £194 million in the next franchise’ he said.

Mr Skates added that the ‘flexible’ contract will allow other potential infrastructure enhancements, which could include four trains per hour on the Ebbw Vale line by 2024 and extension of Wrexham – Bidston services to Liverpool.

All stations will receive a deep clean and other improvements.

Specific station projects include a trial of a ‘dementia friendly’ design at Machynlleth. The ODP contract entails an increase of 600 staff, and 30 apprenticeships per annum for 15 years. There will be a fourfold increase in budget for Community Rail Partnerships, which will double in number.

Several new stations are planned in south east Wales. The Cardiff Bay terminus will be replaced by a new station, closer to the Wales Millennium Centre, accessed via new track across a road. This will be a demonstrator of on-street operation using the light rail vehicles. Other on-street extensions are proposed, but none are funded in the ODP contract. Rhodri Clark

Wales & Borders’ Sunday mileage will increase by 22% in December 2019.

No services are planned to operate on Christmas Day or Boxing Day, but the Valley Lines will gain New Year’s Day services.

Improvements on other days of the week include hourly services from 2022 on the Cambrian main line (Aberystwyth – Shrewsbury) and an additional daily train on the Heart of Wales Line (Swansea – Shrewsbury).

Services on the four main Core Valley Lines will increase to at least four trains per hour throughout, including Rhymney – Bargoed, where hourly service frequency currently applies for most of the day. Electric operation will reduce journey times significantly. There will be 45% more seats into Cardiff on local lines in the morning peak. Services will be doubled from hourly to half-hourly on the Ebbw Vale and Vale of Glamorgan (Bridgend – Barry) lines.

Half-hourly Maesteg services are subject to Transport for Wales finding ‘innovative solutions’ for the infrastructure on the Maesteg branch, which has never been double tracked. Wrexham – Bidston will also double to half-hourly in 2021; the additional workings will be limited stop.

Hybrid Vivarail units and Mk 4 coaches feature in a planned cascade to enable Wales & Borders to comply with the Persons with Reduced Mobility standards by the end of 2019.

Most of the current fleet, which has an average age of 25 years, is non-compliant. In March, government sources said Pacers would continue in operation in 2020, but this will no longer be necessary.

A programme of PRM modifications commenced recently for units of Classes 150/2 and 158. There are still hopes that five Class 769 units, converted from Class 319 EMUs, will arrive in Wales this year, and there is an option for four more.

Local services in North Wales will receive 5x3-car Vivarail Class 230 DMUs with ‘battery assistance’. The type will be based in Chester and Wrexham and tested in the Conwy Valley before also being deployed on Wrexham – Bidston and Crewe – Chester. Three four-coach Mk 4 sets with driving van trailers will replace Mk 3 coaches on the North to South Wales express service in December 2019. This will enable three pairs of express services, with first class restaurant car, to operate between Holyhead and Cardiff on weekdays.

All trains in the current Wales & Borders fleet, and most of the cascaded stock, will be replaced by new trains by 2023, when the average age will be seven years.