EAST WEST Rail has taken key steps forward with the granting of planning permission for Phase Two and the selection of a preferred route for Phase Three between Bedford and Cambridge. 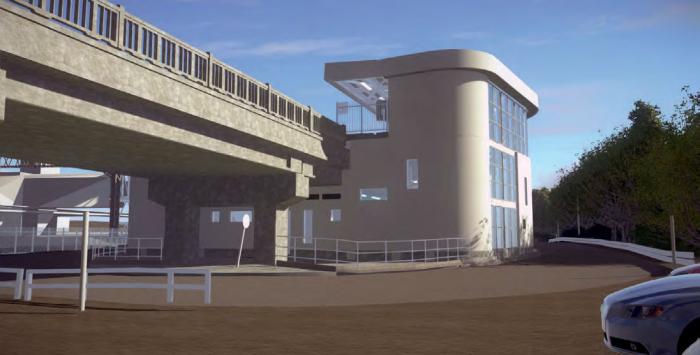 How it could look: artist’s impression of a ground-level view of the EWR platforms proposed on the viaduct over the West Coast main line at Bletchley.

The Secretary of State for Transport has approved Network Rail’s Transport and Works Act Order application, authorising the reinstatement of the partially disused routes between Bicester, Bletchley and Bedford and between Aylesbury and Claydon Junction (where the former Great Central line joins the Bicester to Bletchley route). The order also makes provision for a new station at Winslow, platforms at Bletchley and Aylesbury Vale Parkway and platform extensions at Woburn Sands and Ridgmont. 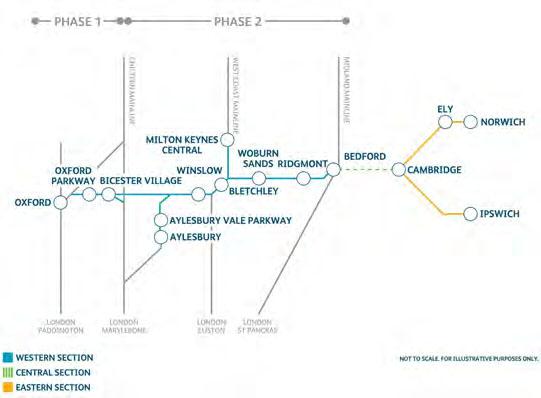 The estimated cost of the scheme as of July 2018 was £1.084 billion, following a cost challenge exercise that saw changes to the scope and a reduction in cost, which have been a source of some controversy. These include the removal of electrification from the scheme, although new structures will have sufficient clearance to accommodate future electrification and the promoters say the benefits of the scheme can be achieved with a diesel-only service. The additional cost of replacing five existing structures with ones that can support an electrified railway has been estimated as £34.5 million.

The line between Aylesbury and Claydon Junction will be single track rather than double track as originally proposed; in part this is because an upgrade of the Princes Risborough to Aylesbury branch had already been shelved and plans for a through Marylebone to Milton Keynes service abandoned. Platform lengths have also been cut from eight-car to four-car maximum length, accommodating the three-car units initially planned for the route, while an hourly freight path between Oxford and the West Coast main line has also been removed.

Meanwhile, a preferred route has been selected for the following phase of East West Rail between Bedford and Cambridge, with this route backed by Government.

The East West Railway Company held a six-week consultation on five options in early 2019. The preferred option, Route E, would use the existing Bletchley to Bedford Marston Vale line into the current Bedford Midland station, providing interchange with Thameslink and Midland main line services. It would then leave Bedford to the north, with a new interchange station on the East Coast main line between Sandy and St Neots before continuing east through a further station at Cambourne and joining the West Anglia main line to enter Cambridge from the south.

With a preferred route option identified, further development work will continue to select a more detailed preferred route alignment in 2021/22. A development consent order application will then be submitted, with the aim of securing consent in 2024 and starting construction the following year. EWR aims to begin running direct trains between Oxford and Cambridge by the end of the decade.