The laws of physics will out 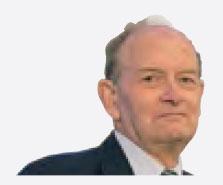 This month we welcome a new fleet to the Table of Truth. Congratulations to Hull Trains on providing reliability data as soon as the first of a new fleet is in service. Note that the lowly position of the company’s lone Class 802 is down to the convention used in the event of a faultless period.

In such cases, the Miles per Technical Incident (MTIN) is the mileage run. Since the mileage is divided by zero, you could also argue that the Class 802 was infinitely reliable in its debut period.

ScotRail has been cock-a-hoop since the South Western Railway Siemens Class 707 fleet was promoted to compete with the galacticos of EMU reliability in the Top 10. But despite the Class 707 elevation, the Class 385’s top ranking among the new trains is well deserved, with a stellar 60,000 MTIN taking the moving annual average 5,000 miles clear of its long-standing rival, GTR’s Siemens Class 700 fleet.

Also at the top of the table we see an example of the swings in MTIN MAA experienced by fleets entering service. In Period 8, the LNER Hitachi Class 801 EMUs were about 1,000 MTIN behind the Class 385 fleet’s MAA. After a poor month with 22 failures, the fleet is in third place and 6,000 MTIN adrift.

Guess who Skyped me just before Christmas?

‘Indeed they do, Sir Isaac,’ replied, ‘aided not inconsiderably by the application of your invaluable Principia to the analysis of traction performance’

‘That is most kind of you, Sir, and it is upon that very subject that wish to converse. hope that you have received the intelligence lately received from Scotland which confounds the Bakerian Heresy?’

‘I assume you mean the timed climbs of Slochd following the introduction of the Class 800 bi-mode trains on LNER’s Inverness service?’ asked.

‘The very same’ replied Sir Isaac, with what seemed like a note of suppressed glee in his voice, ‘and trust you will share this with your readers and put the heresy finally to bed’

‘You can be sure of that, Sir Isaac’ replied. And with a brief ‘I am indebted to you Sir and good day’ the link to the Elysian fields was broken. 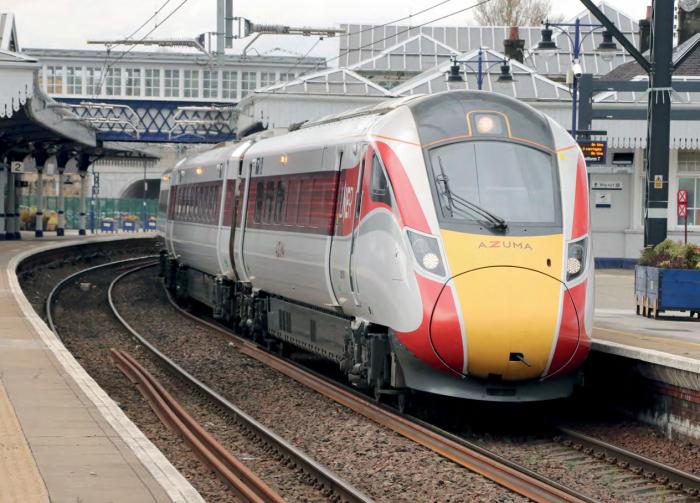 Inverness trial: Azuma No 800109 undertook a ‘dummy run’ on the ‘Highland Chieftain’ route from Edinburgh to Inverness and back on 23 October 2019, prior to an official launch on 9 December. Here the train is seen at Stirling.
Ian Lothian

For new readers, ought to explain the reason for Sir Isaac’s call. When the Intercity Express Programme (IEP) was launched it was conceived as an IC125 replacement (HST2), with a 2 MegaWatt (2,680hp) diesel power car at each end. The revival of electrification saw the concept change to a bi-mode with a similarly-rated electric power car replacing the diesel unit at one end.

These power cars would supply electric traction packages under the coaches. DfT’s Deputy Director, Major Network Upgrades, Stuart Baker, the father of the IEP placed great store on the powers of distributed traction.

In particular he believed that a train with distributed traction would outperform a more powerful train with motored power cars like an IC125.

As an engineer, knew this to be nonsense. The simple formula power = speed x tractive effort confirms the boxing adage that a good big ’un will invariably beat a good little ’un.

But Stuart Baker was remarkably persuasive. Consultant Mott McDonald and builder Hitachi went along with the customer, to the extent that sometimes wondered whether my physics teacher had got it wrong.

It didn’t help that one of the weirder features of the IEP specification was a starting acceleration rate more suitable for an inner-suburban train. So that when the Class 800s entered service on Great Western everyone said ‘there you are – distributed traction’.

But that acceleration lasted only until the train got to the point where the engines were at maximum power and tractive effort started falling. Then, the IC125 with more horsepower per tonne would catch up and storm away. 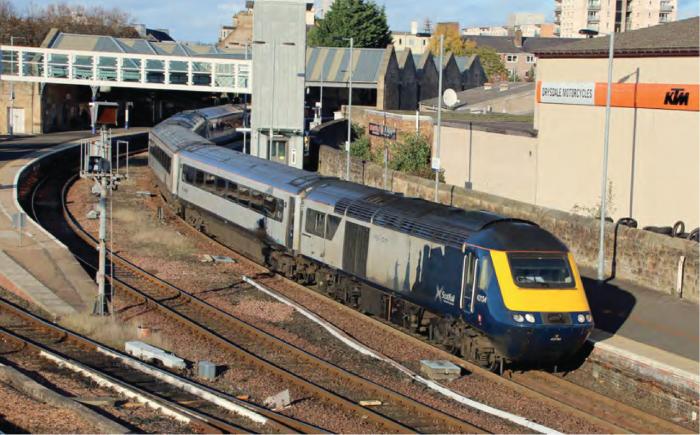 Gateway to the Highlands: an Inter7City shortened HST at Perth on 26 October 2019.
Ian Lothian

When Class 800 bi-modes were ordered for services north of Edinburgh queried their performance over the northern climbs. was reassured that distributed traction would offset the power disadvantage compared with IC125.

Eventually, the December 2019 timetable meant that we were able to test the validity of Newtonian physics by comparing a nine-car Class 800 with IC125 performance over the southbound climb from Inverness to Slochd Summit. I am indebted to my chum David Shirres for the details.

As Sir Isaac would like me to point out, the IC125 has a power to weight ratio of around 10hp/tonne compared with 8.6hp/tonne for a nine-car Class 800 with its engines derated for reliability. QED.

Just to emphasise the point that power to weight is the determinant, ScotRail’s Inter7City shortened IC125s touch the 75mph linespeed limit before braking for the 50mph restriction after the summit. 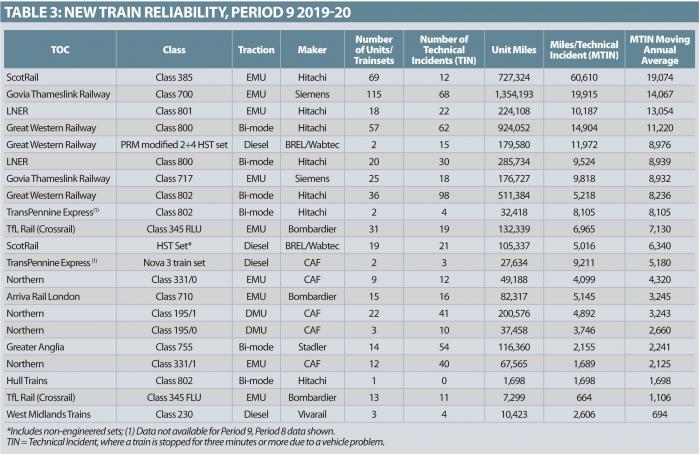 So, Sir Isaac has been vindicated. But does two minutes lost on the climb to Slochd summit so early in the journey matter? Not really.

And agree with LNER that it is not worth cranking up the Class 800s’ MTU diesels from their current rating, as is the case with their sister Great Western Class 802 units. On the Western there is extended high-speed running under diesel power where hp/tonne makes a difference. Uprating brings a Class 802 close to 2+8 IC125 performance. On the East Coast, most of the high-speed running is under the wires.

But this real-life comparison is a reminder that when it comes to traction performance the cold numbers, not wishful thinking, rule. a