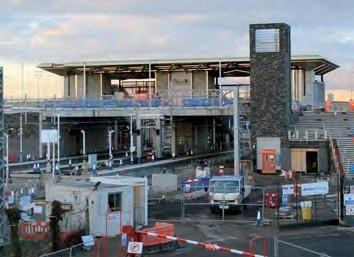 ADDITIONAL SERVICES between Stratford and the new station at Meridian Water are expected to start in September.

Network Rail’s £170 million Lee Valley Rail programme is delivering an additional track over a 5.5km stretch from Lea Bridge to the new station, which is being built as part of a major development led by Enfield Council.

Meridian Water will replace the adjacent and little-used Angel Road station, for which formal closure procedures are underway. On 24 January the Department for Transport published the responses to its consultation on the closure, following which it concluded that the closure should proceed and the proposal be submitted to the Office of Rail and Road for ratification. When the new station opens, existing services that call at Angel Road will instead call at Meridian Water, which NR says will be more accessible and provide better facilities.

In an update on 31 January, Network Rail said the Lee Valley Rail infrastructure is expected to be completed in May. A half-hourly shuttle is expected to be introduced in the autumn from Stratford, with new platforms also being constructed at Northumberland Park and Tottenham Hale stations, both of which gain an accessible footbridge. NR’s principal contractor for the work is VolkerFitzpatrick.