THE MAIN railway into Liverpool’s Lime Street station was shut for a week after a retaining wall collapsed into a 10-metre deep cutting, bringing down the overhead wires.

The route into the station was shut on the evening of 28 February and reopened to services on 8 March.

Network Rail says the work carried out to reopen the line represents a ‘temporary solution’ and a further closure will be required at a later date for a permanent fix to be delivered.

Investigations into the cause of the incident are focusing on the behaviour of the owner of the land adjacent to the wall, Anwar Kassim. According to Network Rail, the section of the wall was ‘loaded with concrete and cabins by a third party’, whilst local paper the Liverpool Echo stated on 3 March that Mr Kassim had been warned by Liverpool City Council in 2012 over ‘dangerous practices at the site’. The paper quoted a council spokesman as stating ‘We can confirm that we took enforcement action against the double stacking of shipping containers on the site in 2012, which led to their subsequent removal’.

Meanwhile, the Conwy Valley line suffered another temporary closure after Storm Doris brought down a tree near Pont-y-Pant on 23 February.

Network Rail initially hoped to reopen the line on 27 February but the rock face alongside the line was found to be unstable. Following an aerial investigation, Network Rail removed vegetation from the rock face and commenced an ‘extensive repair programme’. The line remained closed on 14 March. 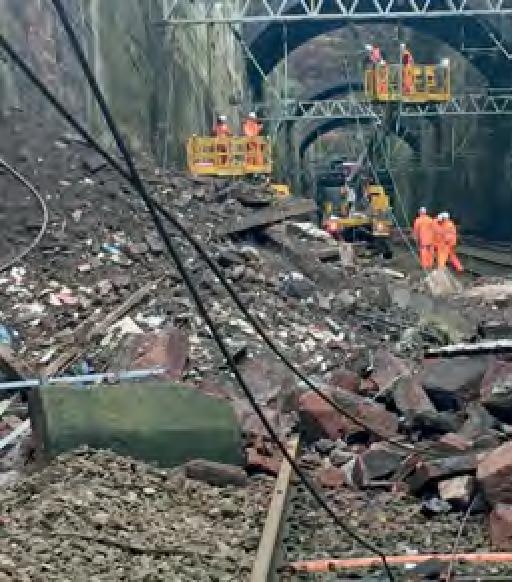 A mess: 200 tonnes of debris sitting on the tracks on the approach to Liverpool Lime Street.
Courtesy Network Rail

The branch line, from Llandudno Junction to Blaenau Ffestiniog, has been closed by flood damage four times in the last 10 years, including a prolonged closure from December 2015 to 22 February 2016.