LIVERPOOL – NORWICH SERVICE TO BE SPLIT

EMUs TO CORBY ALSO COMING IN NEXT EAST MIDLANDS FRANCHISE 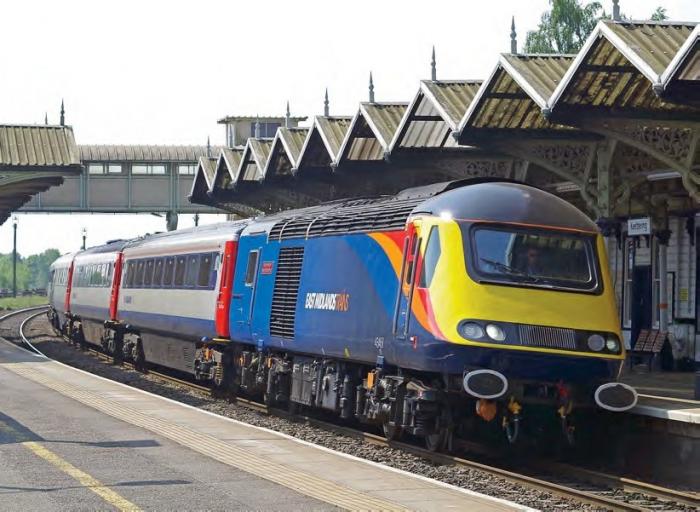 New addition to the fleet: from 21 May East Midlands Trains began operating HSTs transferred from Grand Central. On the first day in service power car No 43467 arrives at Kettering with the 10.05 St Pancras to Nottingham working; No 43468 is on the rear. Mick Alderman

THE DEPARTMENT for Transport has published the Invitation to Tender for the next East Midlands franchise, which will start on 18 August 2019 and run for eight years, with an optional two-year extension. Three bidders are competing to operate the new franchise – Abellio, Arriva and incumbent operator Stagecoach.

On the Midland main line DfT has confirmed plans to segregate services. A ‘dedicated, high quality, express service between Corby and London’ will be operated by EMUs from December 2020, on completion of electrification between Bedford and Corby, and will call at all existing stations on the route. However, bidders are required to provide a contingency plan for a delay of up to two years in delivery of the electrified infrastructure, such as by extending the lease of existing rolling stock.

Contrary to plans mooted in the franchise consultation, one direct service per day will be specified from Melton Mowbray and Oakham to London, with the operator to decide when this service runs.

In the December 2020 timetable, four trains per hour will run between Leicester and London for most of the day, two from Sheffield and two from Nottingham, of which two will call at Market Harborough and one at Kettering. DfT has also specified peak calls at stations between Leicester and Bedford in the counter-peak direction, notably at Wellingborough, to maintain direct journeys on the inter-city section of the route. DfT has promised peak journey time cuts of 20 minutes on services from Sheffield and Nottingham to London.

For the longer-distance services, bidders are required to supply new-build rolling stock which will be capable of operating in electric mode and ‘in another mode’, including for the whole journey if necessary. This stock will be required to maintain Class 222 Meridian timings, with no detriment to end-to-end journey times, with the first train to be delivered in 2021 and entering passenger service in early 2022.

Also specified for the MML is provision for additional freight paths, with bidders directed to provide for up to two paths per hour in each direction between Kettering and Bedford off-peak.

DfT has confirmed it intends to split the current Liverpool to Norwich service at Nottingham in December 2021. The eastern leg from Nottingham to Norwich will remain with the East Midlands franchise, but the western leg from Nottingham to Liverpool will transfer to either TransPennine Express or Northern. DfT says the change will be subject to ‘more detailed assessment’ in conjunction with Transport for the North. It notes around 300 passengers per day would be required to change trains but says the overall benefits of the move outweigh this inconvenience.

More capacity on the Liverpool to Nottingham service, faster journey times and a more reliable service are promised as a result.

Bidders are incentivised to consider extending the eastern leg of the service to start from Sheffield, and to explore the possibility of serving new destinations such as Cambridge. Provision will be made for the East Midlands franchisee to continue to operate the service if an agreement with another operator cannot be reached.

Other proposals to remap services have not been taken forward, with no current proposal to transfer Cross Country services to the East Midlands franchise, although this will be further considered as part of the separate consultation on the Cross Country franchise (p15).

Coinciding with the split of the Liverpool to Norwich service in December 2021 will be a range of enhancements to regional services. This includes a two-hourly Newark North Gate to Lincoln service, which will combine with the planned direct services from Lincoln to London operated by the East Coast franchise to offer an hourly service. Also increasing to hourly will be services from Lincoln to Grimsby, Doncaster and Peterborough, with additional early and late services on the Matlock, Derby to Crewe, Leicester local and Nottingham to Norwich services.

New trains are not specified for the franchise’s regional fleet, currently composed of Class 153, 156 and 158 DMUs. However, bidders are incentivised to provide facilities such as USB ports and air conditioning where not currently offered, while provision of enhanced passenger information systems and high-quality Wi-Fi is required by December 2023. The on-board condition of regional and local trains will be monitored through a Service Quality Regime (SQR) covering non-intercity services, which will also monitor station facilities.

The next franchisee will be required to operate under the name East Midlands Railway, creating a brand capable of transfer to a successor operator. The company will also enter into an alliance agreement with Network Rail’s London North Eastern and East Midlands (LNE and EM) Route.

A minimum investment of £3.6 million will be required in a Station Improvement Fund, with £2.5 million specifically allocated to improve accessibility at stations.

Bidders will be encouraged to introduce Wi-Fi at stations where it doesn’t already exist in order to create a ‘seamless internet experience’ for passengers.

Bids for the new franchise must be submitted by 5 September, with the winning bidder due to be announced in March or April next year.